Qantas and Virgin Australia are restricting how frequent flyers can use their loyalty points, amid concerns a "run" on points could be a drain on their cash reserves during an unprecedented shutdown of the aviation industry.

Virgin last week suspended the transfer of points from its Velocity loyalty scheme to partner Singapore Airline's KrisFlyer scheme, and has also limited the purchase of retail gift cards using points to one per day. 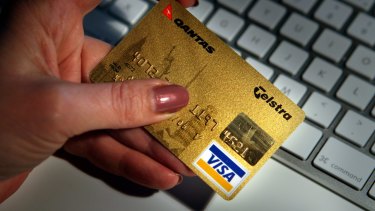 Virgin and Qantas have both put limits on their online stores. Credit:Jim Rice

A note on Virgin's website says the points transfer suspension is "temporary" and that it looks forward to "providing you with this program feature once flight schedules return to normal", while the gift card limit was "due to high demand".

Meanwhile Qantas has limited purchases through its loyalty store to two items of each product every day in response to "high retail demand". The airline has told members the limit was to "ensure the continued availability of products to as many members as possible".

Both airlines are desperately trying to cut costs while most of their planes remain grounded due to the coronavirus pandemic. Together they have stood down around 28,000 workers.

Market analysts have highlighted how loyalty members rushing to use their points could be a drain on the airlines' cash flow, which have virtually no new revenue coming in.

The issue is particularly important for Virgin, which analysts have estimated will use up its remaining liquidity in three to six months. Qantas is expected to be able to last closer to a year.

Virgin has asked for a $1.4 billion government loan and is also seeking to recapitalise its business to ensure it can make it through the pandemic.

Credit Suisse analyst Paul Butler said in a research last month that there was a risk that loyalty members redeeming points at a higher level than normal could "significantly reduce Virgin’s unearned revenue related to loyalty points and be a drag on cash flow".

A Virgin spokeswoman said that with travel restrictions in place, members had shifted their points spending towards goods, gift cards, wine, electronics and merchandise. 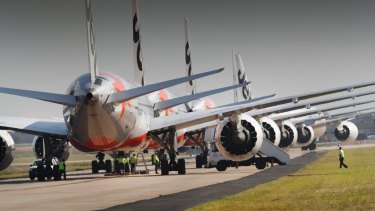 With the aviation industry at a standstill, airlines have virtually no new revenue coming in. Credit:Jason South

"This demonstrates the benefits of a diversified rewards program which enables members to continue to earn and redeem points across a range of categories," she said.

A Qantas spokeswoman said there had not been a significant increase in points redemption, with most members continuing to save up their points "over long periods of time to take a big dream trip". However like most retailers, it was seeing people buy more gadgets online, she said.

Airlines earn revenue when they sell loyalty points to credit card providers or retailers, with the cash sitting on their accounts as "unearned revenue" until members use their points to either book flights or trade them in for products.

Qantas had $2.4 billion in unredeemed frequent flyer revenue in its accounts at the end of last financial year, according to its annual report, while Virgin had $497 million liability for unredeemed loyalty revenue.

A dish-washing robot & a flying Cadillac: See the highlights from CES

US Toughens Guidelines On Coronavirus