Qantas says its plans for ultra-long-haul flights has moved a step closer after a fatigue management system was ticked off by the Civil Aviation Safety Authority, despite concerns from the pilots' union over a lack of consultation.

The Civil Aviation Safety Authority (CASA) confirmed on Thursday it had approved Qantas' new fatigue risk management system (FRMS), which allows pilots to fly for more than 20 hours, having assessed it as "robust and capable" during a 12-month trial. 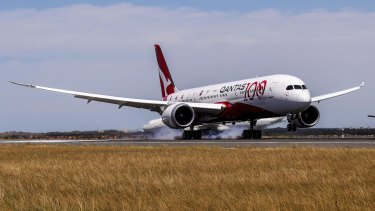 Qantas says it has taken an important step in making its “Project Sunrise” flights from Australia’s east coast to London and New York a reality.Credit:AP

It is the first time CASA has allowed a commercial carrier to design its own fatigue safety systems, rather than have to abide by the regulator's stipulated mandatory breaks and other rules to ensure pilots are alert enough to fly.

Qantas said the system's approval, ticked off on Tuesday, was an important step in making its proposed ultra-long-haul "Project Sunrise" flights from Australia's east coast to London and New York a reality, by allowing it to push pilot duty limits beyond 20 hours.

However, Australian and International Pilots Association president Mark Sedgwick said CASA had not followed its legal responsibility to consult with the union, as the representative of Qantas' pilots.

"This is a clear breach of the regulator's legal and safety responsibilities, according to advice from the International Civil Aviation Organisation, which states that pilots must be involved at all stages of an FRMS implementation," Mr Sedgwick said.

AIPA and Qantas are at loggerheads over a new pay deal for pilots that will fly its proposed ultra-long-haul routes.

Mr Sedgwick said the union had elevated the matter to the Qantas board and also wrote to CASA on Thursday, calling on it to reconsider its "fast-tracked approval" of the system, done "in order to allow certainty over an investment decision for the delivery of its A350 aircraft order".

CASA spokesman Peter Gibson said the regulator responded to AIPA's concerns and considered that it needed only to consult with the union when making decisions that had "broad aviation industry application", and not in decisions in "relation to one individual operator and its personnel".

"We’ll continue to make improvements as we gather more and more data, which could mean changes to rosters or flying patterns to further reduce fatigue," he said.

"This formalises a lot of what we have already been doing alongside the existing regulations."

Mr Gibson said the new system did not cover Qantas' proposed "Project Sunrise" flights, involving pilot tours of duty of up to 23 hours, and that the system would need to be updated and again approved by CASA.