Amid the chaos the coronavirus is wreaking on the regional aviation industry and the substantial loss of earnings that Qantas is facing as the virus dries up travel demand, it is telling that the airline has announced another dividend increase and share buyback.

Airline chief executives know that they operate only a moment away from a "black swan" event. Their companies' ability to absorb unexpected and sudden challenges to their profitability and stability says a lot about their financial condition and the quality of management.

So far, Alan Joyce and his team appear to have Qantas in a better position than most of its regional peers. 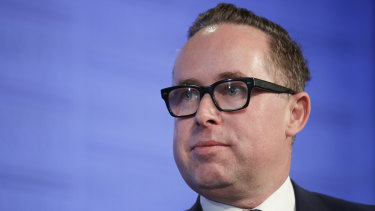 Qantas chief executive Alan Joyce and his team have Qantas is a better position than most of its regional peers.Credit:Alex Ellinghausen

Aviation is the international sector most leveraged to the coronavirus, so it isn’t surprising that Qantas has had to make some drastic changes to its network and flag a substantial loss of earnings in response to the epidemic that has destabilised Asia's carriers.

The swingeing cuts to Qantas and Jetstar’s regional capacity – 16 per cent of the group’s Asian capacity as well as a 2 per cent reduction in its domestic capacity and 5 per cent on the route to New Zealand absorb the impact of reduced international traveller feeds – are an inevitable response to the freezing of China-related travel and the spill-overs into Hong Kong, Singapore and Japan.

But both the size of the capacity cuts and the financial impact of the virus – Qantas’ estimate is that it will reduce second-half earnings by between $100 million and $150 million – pale when set next to the impact on airlines closer to the epicentre of the crisis.

China’s mainland carriers have virtually shut down. Some Chinese carriers like HNA (a major shareholder in Virgin Australia) look like being bailed out or acquired by China’s government. Cathay Pacific has slashed its capacity by 40 per cent. Singapore Airlines has axed 674 flights. Most carriers have stopped flying to China and scaled back their regional capacity.

It says something about the strength of Qantas that it can absorb the hit from the virus without shedding any of the 700 or so full-time roles it says are affected.

Qantas will use its paid leave provisions and freeze recruitment to absorb the impact of effectively taking 18 aircraft out of its operations and will re-jig its maintenance schedules to use the opportunity provided by the grounded planes.

Both the size of the capacity cuts and the financial impact of the virus pale when set next to the impact on airlines closer to the epicentre of the crisis.

Whether Joyce and his board are being overly optimistic about the duration and eventual impact of the coronavirus on the group’s finances, or simply expressing their confidence in Qantas’ condition, it speaks to the group’s strength that it has increased its interim dividend from 12 cents to 13.5 cents a share and announced a $150 million share buyback.

The decision to return $351 million to shareholders is probably warranted, with the group’s first-half result – generated before the virus emerged – demonstrating its resilience.

Despite a $68 million hit from the civil unrest in Hong Kong, the impact of the trade war between the US and China on its freight business, $51 million of higher foreign exchange costs, a $55 million increase in domestic costs as a result of the sales of its terminals and about $12 million of earnings lost through the impact of industrial action on Jetstar during the peak holiday season, its underlying profit was only 4 per cent lower.

It is the strength of the domestic franchise, the diversification and growth provided by its revamped loyalty business and the improved performance of an international business that has been restructured and repositioned over the past five years – along with a strong balance sheet – that enables Qantas to continue returning cash to its shareholders in the midst of a major disruptive event.

Under Joyce it has also shown itself to be decisive and flexible. By opting not to shed jobs or mothball aircraft it has the option of bringing back the sidelined capacity the moment it believes demand in the region is returning, while retaining the ability to take further capacity out of the network should conditions continue to deteriorate.\

For the moment, like most big companies with exposure to China, it is planning on the assumption, based partly on its experience of the SARS epidemic in 2003, that the worst effects of the virus will be over by May and demand will start to return.

There is potential for the post-SARS experience of a sharp rebound in demand once it is evident the virus has been contained as the deferred travel demand kicks back in.

Qantas’ financial strength, diversification and the insulation provided by its domestic core business means that, unlike some regional competitors, it is most unlikely that it could be destabilised by the virus even if the impact is more prolonged and severe than anticipated.

Joyce does have some domestic challenges with the Jetstar industrial dispute and another stoush with Qantas pilots over the terms and conditions for its planned "Project Sunrise" ultra-long-haul routes. But it is taking a hard line on both, ruling out anything above the 3 per cent pay rise Qantas has offered Jetstar workers and threatening to bring in pilots from elsewhere for Project Sunrise if its pilots continue to hold out.

Joyce controversially grounded the Qantas fleet in 2011 in the midst of industrial actions that were having a destructive effect on a group that was far more vulnerable and less profitable that it is today.

Qantas’ current strength was built from the way it took advantage of what was an existential crisis to radically restructure its cost base, which in turn enabled the group to entertain options for new routes and planes that would otherwise have been uneconomic .

Joyce isn’t going to allow that position to be eroded, whether by industrial action or an epidemic.

After a bitcoin crackdown, China now calls it an 'investment alternative' in a significant shift in tone

Mortgage UK: The simple method woman to buy her first home in her 20s