Qantas may characterise the threat by engineers to strike for a 12 per cent pay rise as something of an act of financial terrorism aimed at an airline whose profits are still hungover from the debilitating effects of COVID. And the engineers would likely characterise Qantas as playing industrial relations hardball at Olympic level.

One thing both parties have in common is that they don’t want to be seen as the perpetrators of any action that would further debilitate the travelling public’s already horrible experience of recent air travel. 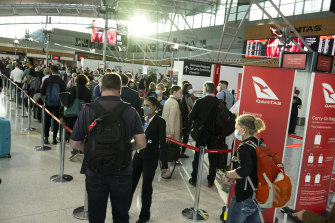 The possibility of industrial action across any part of the aviation industry always attracts attention but in the current environment, disruption-weary passengers are particularly alert to issues that will further complicate their travel plans.

For its part, the union is contemplating a more strategic nuanced version of industrial action – one it promises won’t be undertaken during a holiday period.

Australian Licensed Aircraft Engineers Association (ALAEA) federal secretary Steve Purvinas told this masthead the union would concentrate on actions that would impose a financial penalty on Qantas rather than penalise the public’s travel plans.

He was unwilling to advertise how this could be achieved, lest it interfere with the union’s battle plan.

Qantas was being equally coy about how it would deal with industrial action, saying only that it had contingency plans on which it was not prepared to elaborate.

That said, there were still battle cries echoing the usual hyperbole tradition in these kinds of disputes.

This from the union: “The overpaid CEO expects all workers to freeze their wages as the board tucks away bonuses and share options for Qantas executives.”

While Qantas took its own pot shot, labelling the union’s action as “unreasonable” and “unnecessary”.

To be clear, all that has happened to date is that the Fair Work Commission has given approval for the engineers union, the ALAEA, to hold a member ballot to vote on taking industrial action. But the union is expecting all three groups of engineers will vote overwhelmingly in favour of industrial action.

Adjudicating the merits of each protagonist is notoriously hazardous for outside spectators.

But on the face of it the engineers, whose enterprise bargaining agreement expired three and a half years ago, haven’t had a pay rise in that period. So, rather than the 12 per cent “headline”, it would be a catch-up of 3 per cent a year.

Qantas is offering its unionised workforce a meagre package – a wage freeze for two years followed by 2 per cent increases for the following two years, a $5000 bonus payment if they agree and the equivalent of $4500 in Qantas share options.

Given the current level of inflation, this offer represents a decline in real wages for many of Qantas’ workforce. The company says that 4000 out of 19000 staff across 10 different groups have already signed up for its deal.

That said, Qantas has earned a reputation for tough tactics in industrial relations – famously grounding its entire fleet to deal with industrial action in 2011.

This time around Qantas is arguing less about the merits of the engineers’ claim and more about its financial ability to pay them.

No one is denying that Qantas took a massive financial hit over the course of the pandemic. It had to take on extra debt to bolster liquidity, raise equity from shareholders and received more than $1.5 billion in government subsidies.

Since that time the airline has staged a lazarus-like financial recovery. Over the course of this calendar year it has repaid $1.5 billion in debt after which it is still projecting to make around half a billion dollars in profit before interest tax and depreciation.

The airline has been hit by higher fuel costs but has responded with cutting capacity and raising fares.

No one will be more closely listening harder than the engineers to what Qantas says in July about its prospects for the 2023 financial year.