Maloney, who has elicited the ire of the left for opposing the 2015 Iran nuclear deal, among other things, won her 2020 primary by fewer than 4 percentage points.

“I really love my community and love communities in New York,” Abdelhamid, a native of Astoria, Queens, said. “It’s time for Congress to finally look like our communities and to have a representative who will fight for all of us ― not just certain groups or certain neighborhoods.”

If elected, Abdelhamid, 27, would be among the youngest women ever to serve in Congress. She also noted that Maloney, 75, has represented the district in Washington since Jan. 1993 ― before Abdelhamid was born.

“She’s had nearly three decades to try to make some change and she hasn’t,” Abdelhamid said. “This is a really crucial moment as we’re thinking about the future of New York City, as we’re thinking about the future of this country, and I think we need new leadership — leadership that is going to think about what could be possible for so many of our communities.”

Abdelhamid is a human rights activist, the founder of the women’s self-defense group Malikah, and a Google marketing professional. She is the second candidate this election cycle to earn the support of Justice Democrats, a left-wing group that has played a key role in five successful primary challenges over the last two election cycles.

Alexandra Rojas, the executive director of Justice Democrats, said in a statement that the group endorsed Abdelhamid because she has “fought tirelessly for her community against racism and economic insecurity.”

In a video announcing her candidacy, Abdelhamid talks about how COVID-19 has exposed New York City’s inequalities ― especially those in the diverse 12th District. Her mother survived COVID-19, but Abdelhamid’s family could not afford to send her to a private hospital where they heard that she would receive better care.

“I keep seeing the people doing heavy lifting for New York getting crushed by failed policy,” she says in the video.

Abdelhamid, whose parents are Egyptian immigrants to Astoria’s Little Cairo section, told HuffPost that her commitment to economic justice is rooted in the hardships her family endured while she was growing up in New York City. She was a student in the city’s “underfunded” public schools, and her parents experienced economic dislocation as gentrification took hold in northwest Queens.

Her family moved apartments six times before she turned 9, fleeing rising residential rents. Abdelhamid’s father, a deli owner who drove a taxi at night for extra income, eventually gave up the deli when he could no longer pay the rising commercial rent.

As a result, Abdelhamid hopes to focus on federal housing policy in Washington, including by pushing for a Green New Deal for public housing and pursuing repeal of the Faircloth Amendment, which almost entirely prohibits federal funding for the construction of new public housing.

In addition, Abdelhamid founded Malikah, which helps women heal from trauma, in response to her own experience surviving a hate crime on the streets of New York City. At age 16, Abdelhamid was attacked by someone who tried to violently remove her hijab, or Islamic headscarf.

As a black belt in Shotokan karate, Abdelhamid combines practical skills for self-defense, deescalation and financial literacy with strategies for using communal and spiritual bonds to prevent, and recover from, violence.

Abdelhamid’s survival of the Islamophobic hate crime and her work developing peaceful techniques to limit the impact of violence inform her support for “defunding” the police. It’s a slogan she defines as cutting funding for police departments and using the savings to invest in “community infrastructure” that prevents crime.

Like many Democrats elected in the 1990s, Maloney, who now chairs the House Committee on Oversight and Reform, has a record of policy positions that would put her to the right of the current Democratic Party consensus. She voted for the 1994 crime bill, which critics blame for fueling mass incarceration. Five years later, she voted to deregulate Wall Street banks. And in 2002, Maloney joined 80 other House Democrats in supporting a resolution authorizing the Iraq War.

The Manhattan Democrat, who is a member of the Congressional Progressive Caucus, has taken more left-leaning stances in recent years. For example, she is a long-standing co-sponsor of “Medicare for All” legislation in the House.

Whether that is enough for the increasingly liberal voters in New York City’s Democratic primary electorate remains to be seen.

As recently as 2017, Maloney recommended that then-President Donald Trump select former New York Police Commissioner Ray Kelly, who oversaw the mass use of the city’s controversial stop-and-frisk practice, as director of the FBI. 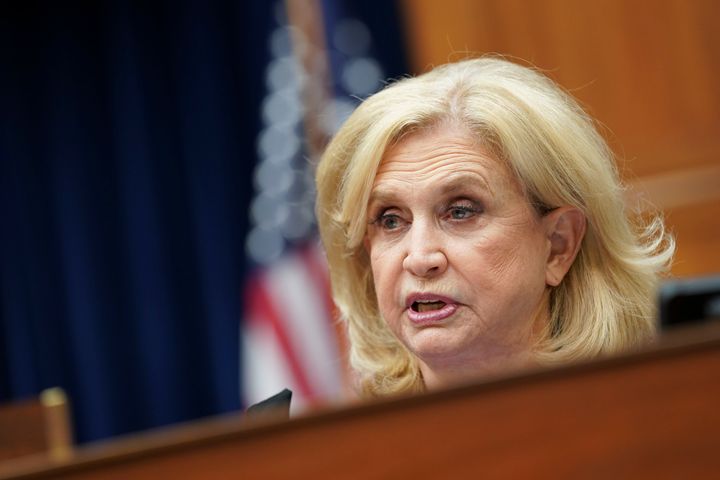 And while she is now an unequivocal supporter of vaccination, Maloney has consistently refused to answer for using her platform, as recently as 2012, to promote concerns that vaccines lead to autism.

“She hasn’t apologized for that misrepresentation still,” Abdelhamid said.

It is not yet clear what the boundaries of Maloney’s new congressional district will be after New York incorporates population changes in the 2020 census.

The current 12th District is made up of the East Side of Manhattan, as well as deeply liberal neighborhoods in northwestern Brooklyn and Queens.

Maloney’s base on the wealthy, centrist Upper East Side came through for her in 2018 and 2020, when Suraj Patel, an attorney, fought her to unexpectedly tight margins in the Democratic primary.

Patel, whose business background and failure to embrace every last left-wing policy deprived him of major progressive endorsements, ended up competing with two other challengers who together picked up more than 17% of the vote.

Abdelhamid encouraged Patel to sit this cycle out.

“He’s already run twice and lost both times,” she said. “He hasn’t been able to consolidate the progressive vote.”

Billionaire climate activist Tom Steyer dishes on Biden's environmental efforts, Trump's impeachment, and whether he wants a job in the new administration