A focus on private label and convenience has paid off for supermarket giant Coles', with the retailer posting a solid first-half result for the 2020 financial year.

The company's earnings before interest and tax came in at $725 million for the half, up 0.4 per cent on the prior corresponding half and at the upper end of the $710 million to $730 million guidance provided in early February. 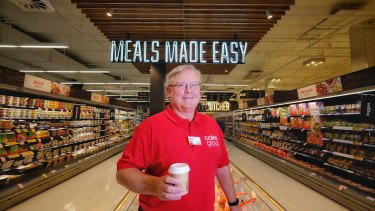 Net profit after tax, when adjusted to reflect the sale of the company's hotels business last year and the company's former Wesfarmers ownership, was $498 million, an increase of 1.7 per cent and well above analyst expectations.

Total sales for the 27 weeks ending January 5 was $18.8 billion, above consensus estimates of $18.7 billion, reflecting 3.3 per cent growth on last year.

In Coles' key supermarkets division, sales were up 2 per cent on a comparable basis, with growth across both quarters, leading to 49 consecutive quarters of comparable sales growth.

Much of this was fuelled by the company's private label 'Own Brand' products, sales of which grew three times the rate of proprietary brands, up 6 per cent for the half, and for the first time achieved sales in excess of $1 billion for December

Coles also made inroads on its ambitious Smarter Selling initiative, which intends to see $1 billion of costs stripped from the company by 2023. A total of $95 million in costs were cut from the business, largely through supply chain efficiencies.

Performance in the company's liquor division, which includes brands such as First Choice and Vintage Cellars, was a dark spot, with comparable sales growing just 0.7 per cent and EBIT dropping 9.9 per cent to $67 million due to a large-scale range review and increased discounting.

For the first months of the new year, Coles said sales were "broadly consistent" with its results over the half, and noted there would also be "some impact" from the coronavirus as the supermarket was seeing delays in equipment being shipped out of China.

An interim fully-franked dividend of 30 cents per share was declared.

"I am pleased, in the release of our first-half results, that we have delivered our demerger dividend commitments and are making clear, early progress on our strategy execution, particularly in Supermarkets," Coles chief executive Steven Cain said.