Philadelphia city commissioners updated reporters Wednesday morning by telling them they do not have much of an update on when they will have final presidential election vote counts, and are unsure exactly when the tallying process will be complete.

During a news conference, City Commissioner Al Schmidt said that results will not be known until "at least this time tomorrow," and encouraged people to be patient as they do their best to ensure an accurate count.

"It’s more important that we do it right than meet artificial deadlines," Schmidt said. "We’re pushing out the results as quickly as we can."

City Commissioner Lisa Deeley was even more vague, refusing to commit to any timeline while promising that as soon as she and her colleagues have new information they will share it. 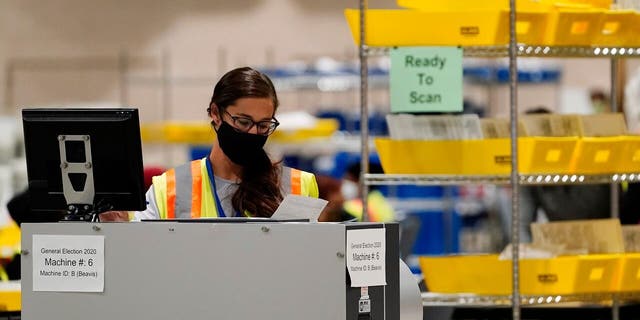 A Philadelphia election worker scans ballots for the 2020 general election in the United States at the Pennsylvania Convention Center, Tuesday, Nov. 3, 2020, in Philadelphia. (AP Photo/Matt Slocum)

Schmidt explained that the unprecedented volume of mail-in ballots made the process more complicated and time-consuming.

The state of Pennsylvania also extended the deadline for mail-in votes to be received from Election Day until three days later, after a ruling from the Pennsylvania Supreme Court. State Republicans are currently looking to challenge the ruling before the Supreme Court, and Pennsylvania Secretary of State Kathy Boockvar said ballots received after Election Day will be counted and segregated pending the outcome of the litigation.