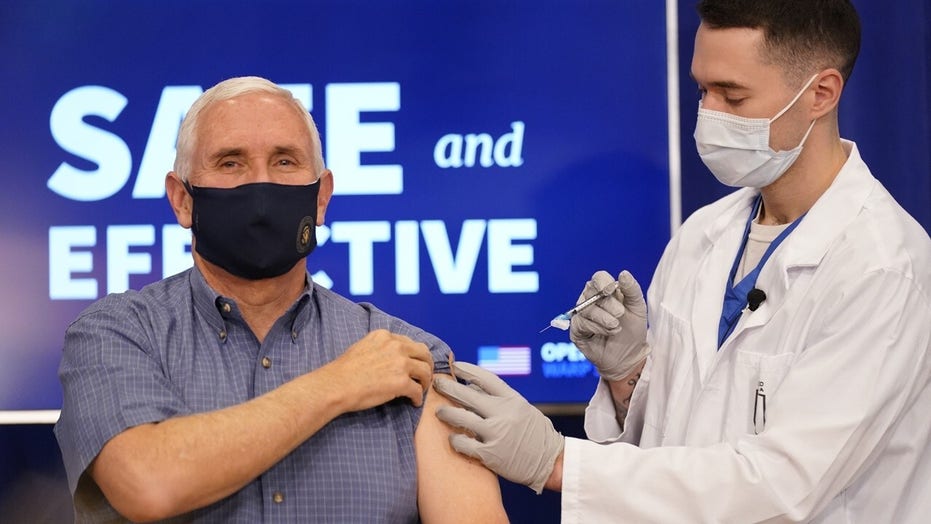 Pence, second lady Karen Pence and Surgeon General Jerome Adams, were all administered the vaccine in front of cameras at the vice president’s office in an event that was broadcast live on national television.

"Karen and I are more than happy to step forward before this week was out to take this safe and effective coronavirus vaccine that we have secured and produced for the American people," the vice president emphasized.

And he stressed that "hope is on the way." 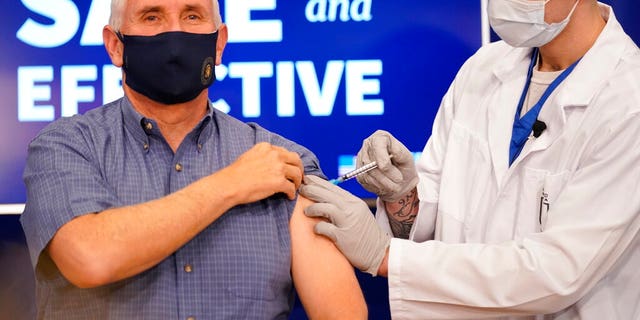 As the vice president, the second lady, and the surgeon general were administered their vaccinations, signs behind them read "Operation Warp Speed" and "Safe and Effective." Warp Speed is the name of the federal program implemented by the White House this year to produce a coronavirus vaccine.

The first doses of the Pfizer and BioNTech coronavirus vaccine were injected starting on Monday into health care workers, who are on the front lines in the battle against a pandemic that’s taken the lives of more than 300,000 Americans since the virus first swept the nation in February and March. The vaccine was authorized last week by the Food and Drug Administration (FDA) for emergency use, and the first doses were delivered to all 50 states, the District of Columbia and Puerto Rico. On Thursday, a second vaccine that’s been produced by the drug maker Moderna was recommended for emergency use approval by an FDA advisory panel.

Noting that it normally takes years to develop and administer a vaccine, Pence highlighted that "we’re on track here in the United States to administer millions of doses to the American people in less than one year."

And he emphasized that "as the people of this country witnessed this past week under Operation Warp Speed, the first coronavirus vaccine is literally being administrated in states across the country to millions of Americans. Make no mistake about it, it’s a medical miracle."

A Fox News national poll conducted last week indicated that 61% of Americans plan to get vaccinated against COVID-19, up from 54 percent in September. Among the 28% who do not plan to be vaccinated, the top reasons include that its development was rushed (23%), a lack of trust it will work (21%), opposition to vaccines generally (13%), distrust of the government (10%), and concern about side effects (9%).

The vice president said that he hoped that by publicly taking the vaccine, it would be "a source of confidence and comfort to the American people."

And Pence said he wanted to "assure the American people that while we cut red tape, we cut no corners."

Trump administration officials are discussing how and when President Trump might receive the vaccine but haven't yet made a final decision, those familiar with the plans told Fox News.

"I don't want to get ahead of the line, but I want to make sure we demonstrate to the American people that it is safe to take," Biden told reporters Wednesday in his hometown of Wilmington, Del. "When I do it, I'll do it publicly, so you can all witness my getting it done."

Former Presidents Bill Clinton, George W. Bush, and Barack Obama have said they will take the vaccine publicly as well to inspire confidence among Americans.

Pence took his shot on Friday as new cases of COVID and hospitalizations continue to surge across much of the nation.

And he urged Americans to "practice social distancing and wear a mask wherever it’s indicated or whenever you’re unable to practice distance and listen to your local authorities."