WASHINGTON — House Speaker Nancy Pelosi on Saturday dismissed the latest White House offer in COVID-19 aid talks as “one step forward, two steps back,” but said she is still hopeful that progress can be made toward a deal.

The White House had boosted its offer before Treasury Secretary Steven Mnuchin and Pelosi spoke on Friday afternoon. President Donald Trump is eager for an agreement before Election Day, even as his most powerful GOP ally in the Senate said Congress is unlikely to deliver relief by then.

A GOP aide familiar with the new offer said it was about $1.8 trillion, with a key state and local fiscal relief component moving from $250 billion to at least $300 billion. The White House says its most recent offer before that was about $1.6 trillion. The aide was not authorized to publicly discuss private negotiations and spoke on condition of anonymity.

Pelosi’s most recent public offer was about $2.2 trillion, though that included a business tax increase that Republicans won’t go for.

“I would like to see a bigger stimulus package than either the Democrats or Republicans are offering,” Trump said on Rush Limbaugh’s radio show Friday. Earlier in the week, Trump lambasted Democrats for their demands on an aid bill.

In a letter Saturday to colleagues, Pelosi said, “This proposal amounted to one step forward, two steps back. When the president talks about wanting a bigger relief package, his proposal appears to mean that he wants more money at his discretion to grant or withhold.” 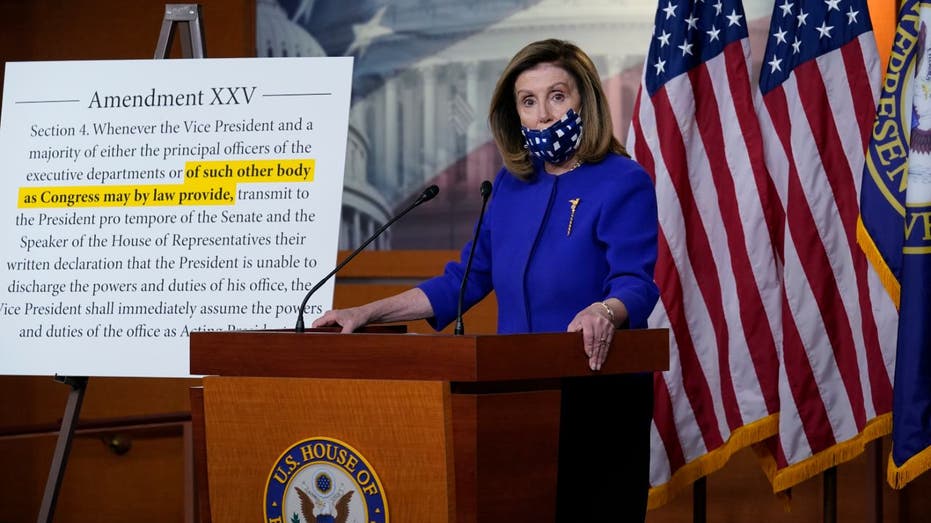 House Speaker Nancy Pelosi on Saturday dismissed the latest White House offer in COVID-19 aid talks as “one step forward, two steps back,” but said she is still hopeful that progress can be made toward a deal. (AP Photo/J. Scott Applewhite)

She said that while his administration attempted to address some of the Democratic concerns, disagreement remained on many priorities and Democrats are “awaiting language” on several provisions.

“Despite these unaddressed concerns, I remain hopeful that yesterday’s developments will move us closer to an agreement on a relief package that addresses the health and economic crisis facing America’s families,” Pelosi’s letter said.

But GOP Senate Majority Leader Mitch McConnell had told an audience in Kentucky that he didn't see a deal coming together soon out of a “murky" situation in which the participants in the negotiations are elbowing for political advantage.

“I'd like to see us rise above that like we did in March and April, but I think it's unlikely in the next three weeks," McConnell said Friday. He said later that “the first item of priority of the Senate is the Supreme Court," suggesting there isn't time to process both a relief bill and the high court nomination of Judge Amy Coney Barrett before the Nov. 3 election.

He spoke after Trump apparently performed an about-face, empowering Mnuchin to resume negotiations with Pelosi, D-Calif., on a larger, comprehensive package despite calling off the talks just days before.

McConnell remains a skeptic that a deal can come together — and he has issued private warnings that many Senate Republicans will oppose a deal in the range that Pelosi is seeking.

“We do need another rescue package," McConnell said. “But the proximity to the election and the differences about what is need at this particular juncture are pretty vast." 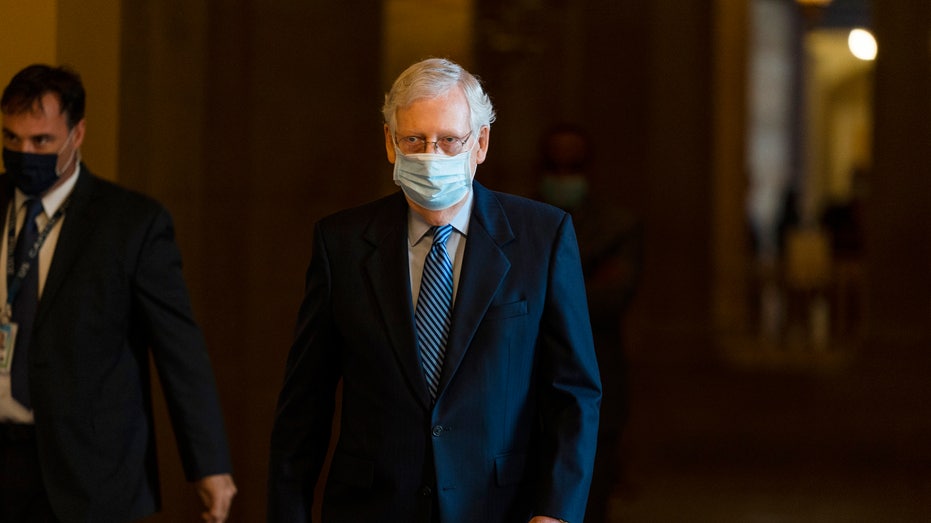 GOP Senate Majority Leader Mitch McConnell said he didn’t see a deal coming together soon out of a “murky” situation in which the participants in the negotiations are elbowing for political advantage. (AP Photo/Manuel Balce Ceneta)

Later Friday, during an appearance in Tompkinsville, Kentucky, McConnell said, “I don’t know whether we’ll get another (virus relief) package or not.”

McConnell's remarks capped a tumultuous week in which Trump sent conflicting signals and made unworkable demands. On Tuesday, he ordered an end to the weekslong talks after being told that few Republicans in Congress would end up voting for a possible Pelosi-Mnuchin deal.

After taking blowback for that decision, Trump sought to revive the negotiations Thursday. Yet even as Mnuchin was reengaging with Pelosi, staffers in the White House — working under chief of staff Mark Meadows, a key negotiator — were issuing demands for a smaller package stuffed with Trump's priorities.

All this comes as Trump is sliding in the polls and is sidelined by his COVID-19 infection. The White House is short-staffed and dealing with infections among its employees. And the president and Pelosi are attacking each other's mental health.

McConnell says he is open to resuming the negotiations in a post-election lame-duck session, but that prospect is murky as well.

Meet the 11 top executives who lead Alphabet's 'Other Bets,' helping the company go beyond just Google

Latest Posts
BoE’s Vlieghe Sees Need For More Stimulus As Pandemic Poses Downside Risks
Issues important to Trump await Barrett on Supreme Court
Google Chrome warning over 'high severity' bug that lets hackers attack your PC – update your browser NOW
Premier Inn owner hit by £725m loss as local lockdowns dent bookings
UBS Q3 Profit Nearly Doubles, Proposes Dividend; Stock Up
Recent Posts
This website uses cookies to improve your user experience and to provide you with advertisements that are relevant to your interests. By continuing to browse the site you are agreeing to our use of cookies.Ok