EXCLUSIVE: Former Gov. Paul LePage of Maine on Wednesday formally kicks off his 2022 Republican challenge against his successor, Democratic Gov. Janet Mills, in what may end up being one of the marquee gubernatorial showdowns in next year’s elections.

The former two-term governor, who steered Maine from 2011-2019, will launch his campaign at a rally at the civic center in Augusta, the state’s capital city.

“I serve you, the everyday working men and women, who pay their taxes, follow the rules and endeavor to always do the right thing,” LePage will say in his speech, according to excerpts exclusively shared with Fox News ahead of the former governor’s address.

And taking aim at Mills, LePage will charge that his successor “inherited a lean, efficient and accountable state government. They proceeded to send Maine backwards.”

“Maine continues to struggle under one of the highest overall state and local tax burdens,” he’ll argue. 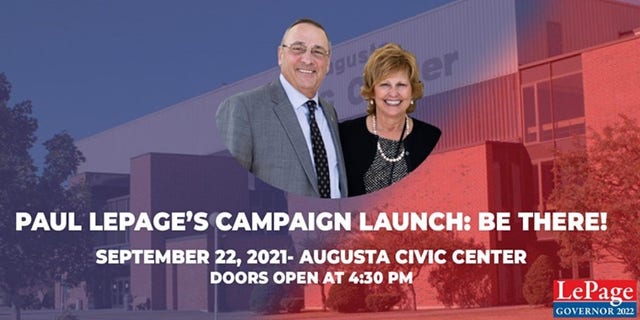 Former Maine Gov. Paul LePage is holding a campaign kickoff on Wednesday, Sept. 22, 2021, at the Augusta Civic Center as he launches a GOP challenge against his successor, Democratic Gov. Janet Mills.

LePage, who was first elected governor in 2010 and reelected four years later, was prevented by term limits from seeking a third straight term in 2018. In Maine, a governor can serve an unlimited number of terms, but only two in a row.

Mills, who as Maine’s attorney general during LePage’s tenure steering the state was often at odds with the governor, has not yet declared she’s running for reelection but has already begun fundraising for a second term as governor.

The pugnacious LePage became known both inside Maine and across the country for stirring controversy thanks to his off-the-cuff remarks.

During his first campaign for governor, LePage said he would tell then-President Obama to “go to hell” if he were elected. A few weeks into his first term as governor, LePage told the NAACP “to kiss my butt” after the century-old civil rights organization called him out for declining to take part in Martin Luther King Jr. Day events.

And LePage sparked more controversy in his second term for saying that out-of-state drug dealers with names such as “D-Money, Smoothie, Shifty” sell heroin in Maine and impregnate “young White girl[s]” before they leave.

But in announcing his 2022 bid in a July statement – which allowed him to begin fundraising – LePage avoided any bombastic language, saying that “Maine faces several challenges and we must work toward building a better future based on individual liberty, fiscal responsibility, and an economy which empowers everyone including our rural communities.”

And at a fundraiser this summer for a conservative group, LePage ​​acknowledged that “I’ve been a bit controversial in the past.”

“Hope to clean up my act this time,” he added.

Brent Littlefield, LePage’s longtime political consultant, is spotlighting what seems to be a kinder and gentler LePage.

“LePage does have a history of working across the aisle,” Littlefield told Fox News, noting LePage’s two elected terms as mayor of Waterville, Maine, a Democratic city. “He’s looking forward to working with Republicans, Independents and Democrats willing to work together to accomplish his goals and his mission.”

LePage’s own background is quite unique, by gubernatorial standards. He grew up speaking French in an impoverished family in Waterville. The victim of child abuse, he ran away from home, spending two years homeless, living on the streets.

“To overcome that, to speak English as a second language, is highly unusual. And then to go on to become a great business success and then to become a mayor and governor is quite a testament to the American dream,” Littlefield highlighted.

LePage, who was known for touting that he was Donald Trump “before Donald Trump became popular,” was a supporter of the former president’s 2016 election and 2020 reelection bid. 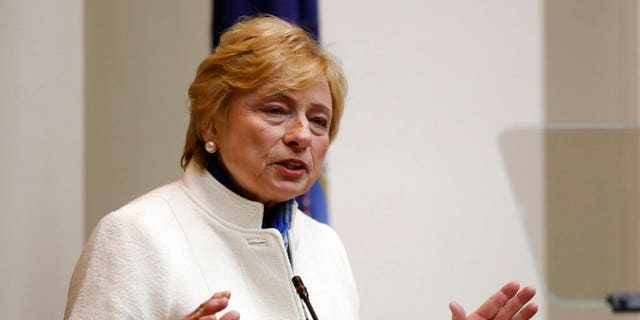 In this Feb. 11, 2019, file photo, Maine Gov. Janet Mills delivers her State of the Budget address to the Legislature at the State House in Augusta, Maine.  (AP Photo/Robert F. Bukaty, File)

LePage has never lost an election, but in Mills he likely has the toughest opponent of his political career. And since his last victory – seven years ago – Maine has turned a slightly darker shade of blue. A state that Hillary Clinton carried by three points in her 2015 presidential election defeat to Trump was carried by now-President Biden by nine points over Trump last November.

LePage won his first gubernatorial election in 2010, and his reelection four years later, thanks in part to third-party candidates splitting the Democratic vote. But as of now, there’s little indication that such a scenario will happen in next year’s election.

The Democratic Governors Association (DGA), ahead of LePage’s campaign kickoff, charged that if elected again, the former governor “would drag Maine backwards and Maine’s economy and working families down with him.”

Capitol police pull man out of suspicious SUV parked in front of Supreme Court: 'Everyone is safe'