Televangelist Pat Robertson agreed that abortion and same-sex marriage are partly to blame for the novel coronavirus that has caused massive social and economic upheaval in the U.S.

“You confess your sins and forsake them. Then he heals the land. It’s not before,” he said on an episode of his show, “The 700 Club,” earlier this week.

Robertson’s comments came during a segment in which he fields questions from viewers. On Monday, a viewer asked him about how a popular Bible verse, 2 Chronicles 7:14, applies to COVID-19, the illness caused by the novel coronavirus. The verse reads, “If my people, who are called by my name, will humble themselves and pray and seek my face and turn from their wicked ways, then I will hear from heaven, and I will forgive their sin and will heal their land.”

The viewer asked: “How can God heal our land and forgive the sins when abortion and same-sex marriage are laws and many people are anti-Israel. Doesn’t this prevent his healing and forgiveness?”

Robertson told the viewer, “You are right.”

“I think you put your finger on something very important. You know the Bible says ― they turn from their wicked ways,” he said. “We are not turning when we have done terrible things.”

In his response, Robertson explicitly cited abortion and abuse of the poor as some of the reasons why “God would hold us guilty.”

CBN did not return HuffPost’s request for elaboration about Robertson’s statements.

Most Christian traditions would agree that abusing the poor is a serious sin. But Christian denominations in the U.S. have adopted a wide range of positions on issues such as same-sex marriage, abortion and the Israeli-Palestinian conflict.

Within American evangelicalism, whether Robertson’s views are mainstream or fringe is a matter of debate between scholars. What isn’t up for debate, however, is his network’s reach and influence.

“The 700 Club” is the flagship program of CBN, the conservative network Robertson founded in 1960. The show has considerable reach ― about 650,000 U.S. households watch Robertson’s “700 Club” program every day, according to CBN. The network also maintains close ties to President Donald Trump’s administration and regularly features high-ranking White House officials as guests on its shows.

Robertson’s roots are in the Southern Baptist Convention, America’s largest Protestant denomination. But over the years, he has become more closely identified with charismatic Christianity, which emphasizes spiritual gifts such as speaking in tongues and prophecy.

The televangelist has long drawn criticism for taking inflammatory positions on Islam, LGBTQ issues and feminism. He’s received backlash for appearing to blame national tragedies on culture war issues, such as LGBTQ rights and abortion.

Immediately after the Sept. 11 attacks, Robertson and fellow televangelist Jerry Falwell, Sr. speculated on the “700 Club” that God had allowed the terrorists to succeed because the U.S. had become a nation of abortion, feminism, homosexuality, and secularism. Faced with withering disapproval from then-President George W. Bush and fellow evangelicals, both men later insisted their comments were taken out of context. 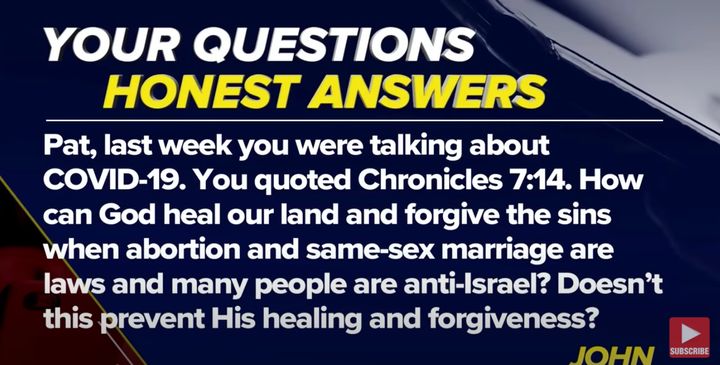 Most evangelical Christians consider abortion and same-sex marriage to be sinful, but many would be hesitant to interpret COVID-19 or similar events as God’s judgment on America, according to Thomas Kidd, a historian at Baylor University who studies evangelicalism.

“Few evangelical leaders or pastors are willing to get as specific as Robertson about the connection between our sins and God’s temporal judgments,” Kidd said. “In this sense he is an outlier.”

Some evangelical leaders would also question Robertson’s interpretation of 2 Chronicles 7:14, Kidd said, doubting if this verse should be applied to God’s relationship with the U.S. today.

“Some evangelicals would also note that the verse calls on God’s ‘people,’ not Americans or all people in general, to pray and repent of their sins,” Kidd said.

Jason Bivins, a scholar of religion and politics at North Carolina State University, argued that Robertson’s belief that God withholds blessings from nations because of certain sins is “very common” within American evangelicalism, particularly among middle-aged and older white evangelicals.

The Christian Right’s belief in God’s covenantal relationship with the U.S., and  in end-times prophecies about Israel, has helped shape U.S. foreign policy for decades, Bivins said.

“Not only is Robertson not an outlier, but this sensibility is very much present at the highest levels of the U.S. government, even if the rhetoric doesn’t always get wielded as bluntly as it does by Robertson,” Bivins said.

Who is Sheryl Sandberg?

Ingraham: Why America must boycott the 2022 Winter Olympics in China