A spokesperson for Pennsylvania Gov. Tom Wolf Sunday slammed an elections bill proposed by Republican state lawmakers, calling it “an extremist proposal” that will “silence the voices of Pennsylvanians.”

Wolf, a Democrat, broadly panned GOP efforts on election laws last week, vowing to “veto any legislative efforts to roll back the freedoms Pennsylvanians right now have.” But the weekend statement was new reaction from Wolf’s office after the substance of the Republicans’ bill became public.

“Make no mistake, this proposal is not about protecting voter rights or increasing access. It is an extremist proposal to try and undermine confidence in our election system which led to the assault on the U.S. Capitol,” Wolf press secretary Lyndsay Kensinger said. “They don’t like the outcome of the November election and now they are retaliating against the voters by pushing a proposal disguised as ‘election integrity.’ They want to create new barriers to voting and silence the voices of Pennsylvanians.”

Kensinger added: “It is appalling to try to pass laws to take away the freedom to vote for your own political gain. The governor will always defend our democracy and the right to vote for every Pennsylvanian regardless of your political party.” 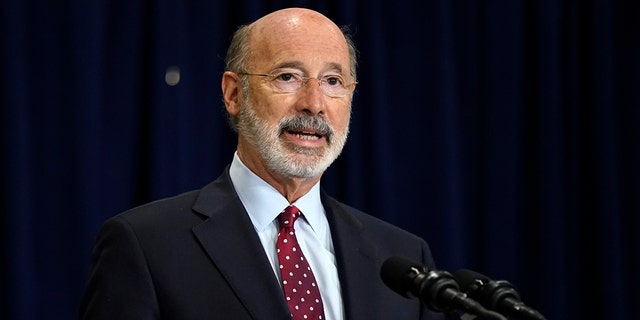 In this Nov. 4, 2020, file photo, Pennsylvania Gov. Tom Wolf speaks during a news conference in Harrisburg, Pa., regarding the counting of ballots in the 2020 general election. (AP Photo/Julio Cortez, File)
(AP)

Jason Gottesman, a spokesman for state House Republicans, said the administration’s statement about the bill is “misinformed.”

“House Republicans have made a good faith effort to reach out to the Wolf administration to engage in negotiations on the Pennsylvania Voting Rights Protection Act, but they have once again refused to come to the table and work in a substantive way to fix Pennsylvania’s Election Code,” Gottesman said.

The bill would allow voters to return mail ballots via mail, in person to county boards of elections, or to drop boxes that are required to be monitored by election officials. It will also ban permanent mail-in voting lists, requiring voters to request a mail ballot for each election they wish to vote that way.

The bill would also establish a “Bureau of Election Audits” to “conduct result-confirming audits of each election in the Commonwealth, completed by the third Friday following the election.”

But likely to be the most contentious element of the bill is its new requirement that voters present identification every time they vote rather than just the first time they vote at a certain polling place. All current forms of voter ID would be accepted if the law is passed, as well as signed affidavits if voters do not have ID with them.

The bill would also expand what counts as valid voter ID with a new free voter ID card.

“This responsible bill includes all aspects of issues brought before the committee and will propel Pennsylvania’s election into the 21st century, all while fixing fatal flaws and election security issues,” said state Rep. Seth Grove, a Republican who is the chief sponsor of the bill.

The nearly 150-page bill also includes many other provisions, including a voter’s bill of rights. Among those rights are the right to replacement ballots in case of mistake and the right to voting assistance.

Republicans hold significant majorities in both the Pennsylvania state House and Senate. But those majorities are not veto-proof, so the Republicans’ bill is nearly certain to fail.

The Wall of Moms Got Your Attention, but Mothers Have Always Been Fighting for Change