Bankruptcy Judge Robert Drain said that with small changes he would approve the plan, which overcame opposition to garner support from nearly all states, local governments, tribes, hospitals and other creditors that voted on the restructuring. They became creditors in the bankruptcy by virtue of suing Purdue and Sackler family members over their alleged contributions to the nationwide opioid epidemic. 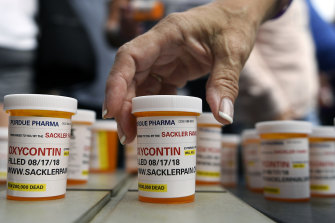 Bankruptcy judge Robert Drain said it was clear the wrongful marketing of the company’s opioid products contributed to the addiction crisis in the US,Credit:AP

Drain said it was clear the wrongful marketing of the company’s opioid products contributed to the country’s addiction crisis, which touched every corner of the country. “That makes the bankruptcy case before me highly unusual and complex,” said Drain, who spent more than six hours reading his ruling from the bench.

The plan, which Purdue values at more than $US10 billion ($13.6 billion), dissolves the drugmaker and shifts assets to a new company not controlled by Sackler family members. The new company will be owned by a trust run to combat the opioid epidemic in US communities that alleged the company and its owners aggressively marketed the painkiller OxyContin while playing down its abuse and overdose risks.

The Sacklers have denied allegations, raised in lawsuits and elsewhere, that they bear responsibility for the opioid epidemic. They have said they acted ethically and lawfully while serving on Purdue’s board.

The Purdue bankruptcy plan includes a $US4.5 billion contribution from Sackler family members. The contribution is in the form of cash that will be paid over roughly a decade and also includes $US175 million in value from relinquishing control of charitable institutions.

Drain noted that he had expected a larger contribution from the Sacklers and said the evidence showed more might have been secured through litigation, although that was hard to predict.

“This is a bitter result,” he said. He also said he would not jeopardise what the plan did achieve by rejecting it and asked for small changes to secure his final approval.

Still, the evidence showed the plan was negotiated by the creditors who all viewed the Sacklers as “the other side, the opposition, the potential defendants,” Drain said. “This is not the Sacklers’ plan.“

The drugmaker pleaded guilty to criminal charges in November stemming from its handling of opioids. At the outset of its bankruptcy case, Purdue said there were a number of legal defences it could mount in response to lawsuits alleging improper conduct.

“This order is insulting to victims of the opioid epidemic who had no voice in these proceedings,” said Washington Attorney General Bob Ferguson, who said his office would appeal.

A lawyer for the Office of the US Trustee, a bankruptcy watchdog and part of the Department of Justice, said his office would file a motion for a stay of the order confirming the plan during the appeal. 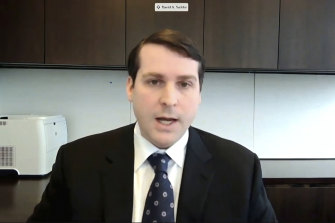 David Sackler, one of Purdue’s owners, testified that he and other relatives had a “moral responsibility” to help combat the opioid crisis in light of OxyContin’s role.Credit:AP

More than 95 per cent of creditors voting approved Purdue’s restructuring, far above the legal threshold required for a bankruptcy judge’s blessing.

Sackler family members behind Purdue were prolific philanthropists, with their names on museum wings and other cultural institutions. They have also agreed to a prohibition on associating their name with charitable contributions until litigation settlement funds are fully paid and they have exited all businesses worldwide that manufacture or sell opioids, according to court records.

Much of the plan’s value is contingent on future donations of overdose reversal and addiction treatment medications that Purdue has under development.

Sackler family owners testifying during bankruptcy proceedings before the plan’s approval were at once apologetic and defiant. David Sackler testified that he and other relatives had a “moral responsibility” to help combat the opioid crisis in light of OxyContin’s role.

Both he and Mortimer D.A. Sackler, another Purdue owner, described the painkiller’s contribution to the epidemic as unintentional. Mortimer said he was “sorry.”

David, though, made clear that he and other relatives would not contribute billions of dollars of their wealth toward resolving opioid lawsuits and combating the crisis without the broad legal releases shielding them from future liability.

When his father, former Purdue president Richard Sackler, was asked by a lawyer for Washington state opposing the bankruptcy plan whether the family or the company bear any responsibility for the opioid crisis, he responded with a firm “no.”

Purdue’s owners are descendants of the late Raymond and Mortimer Sackler. Another Sackler, Arthur, died in 1987 and his shares in a predecessor company were sold before OxyContin’s introduction.

Purdue filed for bankruptcy in September 2019 amid an onslaught of litigation against the company and its owners. Roughly 3,000 lawsuits nationwide sought to pin blame on Purdue and Sackler family members for contributing to a public health crisis that has claimed the lives of about 500,000 people since 1999, according to the US Centres for Disease Control and Prevention.

Drain, the judge overseeing the case in a White Plains, New York, bankruptcy court, agreed early in the case to halt litigation against Purdue and Sackler family members who had not filed for bankruptcy themselves.

Overall, the company resolved US Justice Department criminal and civil investigations that carried penalties and other claims exceeding $US8 billion. Much of that money, though, went unpaid due to factors in Purdue’s bankruptcy case.