After giving notice last month of its intention to fast-track the retirement of its 2880-megawatt Eraring power station in New South Wales from 2032 to as early as 2025, Origin on Wednesday outlined new goals for “multi-gigawatt” growth in renewable energy by the end of the decade. 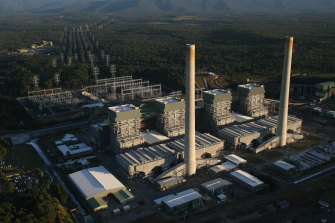 The Eraring power station was originally intended to close in 2032, but will now shut in 2025.Credit:Dean Sewell

Mr Calabria told investors the accelerating transition of Australia’s fossil fuel-dominated power grid towards cleaner sources of energy presented a “lot of growth opportunities for an organisation like Origin” to generate and source the energy it sells to customers from low-cost and low-carbon assets.

“We have a belief in decarbonisation that’s good for business and our shareholders, and good for the environment and customers,” he said. “We’ve made some meaningful decisions to move our portfolio in that direction.”

It is also aiming to give the financial go-ahead to the first 460-megawatt phase of a massive 700-megawatt big battery at the site of Eraring by the end of this year.

“The customer experience will change, our capabilities, the use of technology, the scale of our customer base, the products we offer,” Mr Calabria said. “As Eraring comes out, we have a great opportunity to grow both renewable storage and other ability to manage energy supply, and have the backdrop of a strong set of cash-generating businesses.”

Macquarie analyst Ian Myles said Origin’s strategy was logical and unsurprising for a company aiming to become the lowest-cost provider and push deeper into more consumer-engaged products. He described Origin’s goal of having 5000 electric vehicles “under management” by 2026 as an “interesting development”, and said the figure may even prove conservative amid forecasts that Australia’s initially slow growth in electric-car adoption could sharply increase.

Despite the commitment to bring forward Eraring’s closure and replace its capacity with renewables and storage, shareholder activists on Wednesday criticised the company’s climate credentials, saying it could not claim to be aligned with the Paris Agreement’s targets of limiting the planet’s heating to 1.5 degrees while its Australian natural gas business continued exploratory drilling in new fossil fuel basins.

“Origin has made huge strides forward in its electricity business, but it will remain a climate laggard while it continues to pursue gas expansion plans,” said Dan Gocher of the Australasian Centre for Corporate Responsibility.

While clean-energy advocates have welcomed Origin’s plans for an earlier shutdown of Eraring, the shock announcement last month sparked fresh debate about the east-coast power grid’s ability to handle the pace of change. The Morrison government has ramped up warnings that withdrawing such a large amount of reliable coal power capacity from the market raised the risk of price volatility or even power disruptions during times of the day when wind or solar generation are unavailable.

Origin is confident that building more on-demand energy assets like gas plants and big batteries as well as new transmission lines to improve the flow of power would “more than compensate” for Eraring’s exit without negatively affecting consumers. But Mr Calabria has also vowed that Origin would continue evaluating market conditions and the delivery timeline for the incoming projects before making a final call on the closure date to ensure the grid was well-equipped.

'By joining, you agree to being recorded': PS5 players can record online voice chats and report the audio to Sony to catch bullies and cheats

MyPillow's CEO is standing by Trump after the deadly Capitol riots, and offering customers a discount with the code 'FightForTrump'