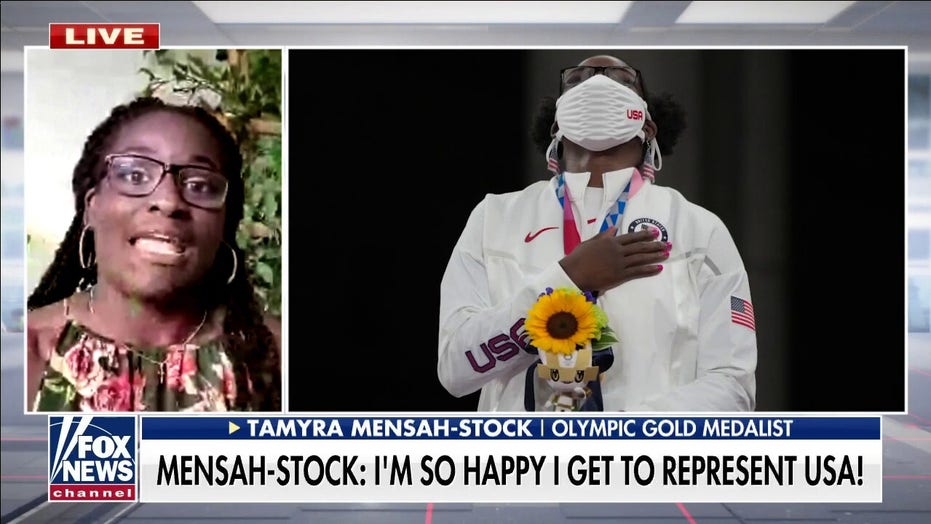 Gold medal winning Olympian: I wouldn’t want to live anywhere else than America

Olympic gold medalist Tamrya Mensah-Stock went viral last week for her post-victory response when asked  “How does it feel to represent your country like this?”

“I love representing the U.S. I freaking love living there,” Stock said before pumping her fist, smiling as she pulled an American flag draped on her shoulders tighter to her body.

The Olympian joined “America’s Newsroom” Wednesday, days following the end of the Olympic games. When anchor Dana Perino asked about the now-viral interview, Mensah-Stock reflected on her emotional responses.

“That specific moment when he asked me that I felt like, I went into a trance and God just spoke through me, and I was like, ‘All right, look directly at the camera and just go,’’ she said. “I know there’s a lot of negativity going on, and I just want to enlighten people of my feelings to spread positivity, and it happened.”

Mensah-Stock’s display of patriotism was a direct contrast to many Olympians that used the Olympics as a platform to air their grievances over the United States. She is grateful to have grown up in the U.S.

“I was born here,” Mensah-Stock said. “My dad is an immigrant from Ghana where he met my mom. I grew up in Texas. It’s the only place I know, and I have traveled all over the world and I definitely wouldn’t want to live anywhere else. I prefer here. Japan was beautiful, here is better.”

The Olympic gold medalist plans to use her winnings from the games to buy a food truck for her mother, fulfilling a lifelong dream.