The sudden crash in global oil prices has prompted Australian oil and gas producer Oil Search to cancel sale talks and slash spending by up to $675 million by shelving projects around the world.

In the first of an expected wave of cutbacks among Australia's energy companies after the price of oil plunged to multi-year lows, Oil Search immediately suspended all its discretionary spending in a bid to preserve the value of the business.

"These unprecedented times require us to take immediate and decisive steps to position us for a potentially extended period of lower oil prices and business uncertainty," Oil Search's managing director Keiran Wulff said on Wednesday. 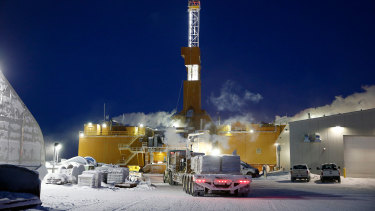 Oil Search has halted talks to sell a stake in its Alaskan assets amid crashing oil prices.

The deep cuts – reducing the company's expected investment spending this year by about 40 per cent to a range of $US440 million to $US530 million – come after a market share battle between oil-producing nations Saudi Arabia and Russia unleashed greater supply and lower prices on a market already suffering from falling demand due to the coronavirus pandemic.

Suffering the sharpest price falls since the Gulf War in 1991, the benchmark Brent crude and West Texas Intermediate have dipped below $US30 a barrel, triggering a sell-off from oil and gas stocks and warnings of project delays and cost-cutting across the industry as companies seek to weather the storm.

Among Oil Search's cutbacks for 2020, the company said it had suspended all non-essential projects and activities in Papua New Guinea and deferred exploration work it had planned. In Alaska, works to begin early oil production at its Pikka project have been put on hold, and no further exploration will be carried out. Oil Search said it had also decided to suspend the formal process to sell off a 15 per cent stake in its Alaskan assets.

Of all the ASX-listed oil and gas producers, Oil Search's shares have been hit the hardest, plummeting by more than 50 per cent in the past two weeks to a 15-year low of $2.54.

Mr Wulff said it was unclear how long these events and the subsequent oil prices and sharemarket volatility would last.

Analysts noted Oil Search had the highest proportion of capital expenditure for 2020 that was considered "discretionary" among the ASX-listed oil and gas producers, and said the cutbacks were wise.

"We believe this is a prudent approach in what is a treacherous oil price environment characterised by uncertainty," Royal Bank of Canada oil and gas analyst Ben Wilson said on Wednesday.

"We do not think Oil Search will be alone in announcing capital expenditure reductions going forward."

According to Macquarie Wealth Management, a prolonged collapse in oil prices could force delays in Woodside and BHP’s highly anticipated $17 billion Scarborough LNG development in Western Australia and Santos’ $7 billion Barossa development, as well as Oil Search's projects in PNG and Alaska.

“Long-term growth projects are under pressure,” Macquarie analysts said, pointing out that some would fail to generate an acceptable return under a spot price scenario and faced the risk of delay unless the oil price recovered.

Woodside, which is continuing to work with partner BHP towards a final investment decision on Scarborough in 2020, said last week that it was prudent to "take stock on emerging uncertainty".

"We will be stress-testing Woodside’s financial position for a range of scenarios and will make financially prudent decisions," a spokeswoman said.

"We think our projects are resilient to low oil price outcomes."

Sara Carter warns of Big Tech’s growing dominance: ‘This is a movement toward fascism’

Cold Weather Payments TRIGGERED: All postcodes where Britons could get £25 payout

Vocal critics of the US pandemic response are emerging: central bankers