A Democratic New York City councilwoman is under fire for remarks she made following the fatal shooting of two NYPD officers, in which she offered condolences to the slain officers and their alleged killer in the same line.

Richardson Jordan wrote Tuesday on Twitter: “My deepest condolences to the families of Officer Rivera, Officer Mora and Lashawn McNeil. Lives lost due to broken public safety & mental health systems that spare nobody. Harlem stands with the families of the fallen and we will not stop fighting for a safer world for all.”

McNeil, allegedly a career criminal with ties to New York, Baltimore, and Allentown, Pa., died reportedly from injuries sustained after being shot by a third officer while trying to escape the scene. 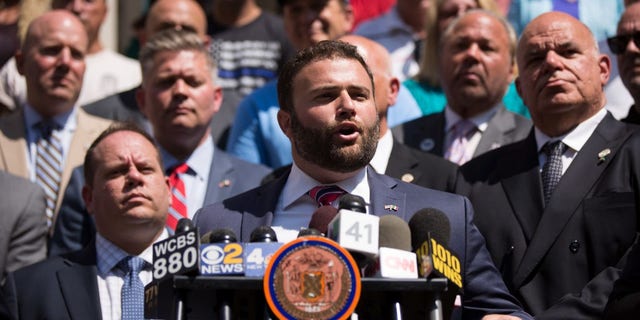 “She’s a complete disgrace, and kudos to some of my Democratic colleagues who’ve chimed in on her as well,” he said, after Richardson Jordan was met with somewhat bipartisan criticism in the 46-5 Democratic-majority chamber.

“To mention his name … in the same sentence, almost equivocating it with the man who killed him is a new low for some people that I thought couldn’t possibly go lower,” he added. “And yet, here we are.”

“People like this have no place in office. I’m happy to disagree with people all the time, and there are some decent people I disagree with. [Richardson Jordan] is not one of them.”

“He’s the one who’s telling us he’s not going to charge people with gun crimes and fully prosecute them, according to the law. So it’s just lip service from people like him. And unfortunately, that has real-world consequences,” Borelli said.

“Every single police action, whether it’s a domestic violence response like this or a traffic stop, has the potential of going south. And if police officers are not going to be protected by the law, if the prosecutors are going to go after the people, then we have to reconsider whether it’s even worth the risk of sending cops in the first place.”

“And it’s unfortunate that we’re having this conversation in the wake of the death of two of our finest people.”

Trump says of Capitol rioters who sought to overturn Biden's win: 'What I wanted is what they wanted'