Crown Sydney's opening on Monday was as low key as the casino operator's embattled management would have hoped for, with neither James Packer nor the company's chief executive Ken Barton in sight.

The opening of the hotel is a small piece of good news for Crown, which has spent most of this year battening down the hatches and apologising for the barrage of governance deficiencies exposed at the inquiry into its suitability to hold a licence to operate Sydney's second casino. 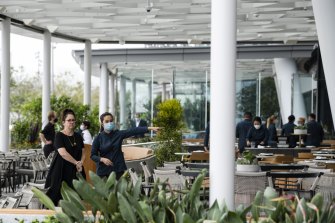 The fate of the casino operation, which underpins the economics of the $2.2 billion project in Barangaroo, remains uncertain. And even if Crown ends up winning a licence, it could come with strings attached, including the need for Mr Packer to relinquish his hold on Crown.

The inquiry, launched in August last year in response to a series of reports into Crown's dealings by The Age, The Sydney Morning Herald and 60 Minutes, has already been costly for Mr Packer, with the value of his Crown stake dropping by more than $500 million this year.

But on Monday the focus was on the non-gambling operations that Crown was allowed to open. "Happy opening day," a Crown employee joked to other staff members who were the only customers at Il Caffe at 7am.

It was a similar situation inside the surprisingly compact main lobby and closed-off retail strip. The hotel was open for business but not a single guest could be spotted among the bustling staff. 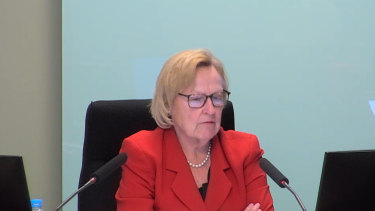 The phrasing echoed lines used in 2012 by Mr Packer as part of his brutal but effective campaign to ensure his family's dynastic ambitions to build a casino were fulfilled after missing out on a 1994 casino licence which was awarded to what is now The Star.

In November, The NSW Independent Liquor and Gaming Authority (ILGA) forced Crown to delay the opening of the casino portion of the resort until the inquiry into Crown's suitability as a licence holder reports back to the regulator early next year.

The probe uncovered evidence of money laundering at Crown Melbourne and in associated bank accounts. The inquiry also examined the company's partnerships with "junket" tour operators linked to organised crime and exposed the risks it took in doing business in China before 19 staff were arrested there in 2016.

Commissioner Patricia Bergin is due to deliver her recommendations on whether Crown is fit to keep its gaming licence by February 1. However, Crown has already suffered contagion from the NSW inquiry, with the Victorian regulator bringing forward its five-year review of Crown Melbourne’s casino licence in light of the evidence presented to the Bergin inquiry.

But for now, Crown's management and Mr Packer will take solace from the fact that its operations in Barangaroo are finally open. It's a start, albeit a modest one, and something for Crown to hang on to as Mr Packer's last major gamble as a casino operator plays out in the new year.

Softbank funds tech giants. But they're not all successes

Ex-Goldman Sachs CEO: ‘I Might Find It Harder To Vote For Bernie Than For Trump’