Media giant Nine Entertainment Co could pay up to $600 million over five years to the NRL under a deal that would return the value of the broadcast rights for the popular rugby league competition to pre-COVID-19 levels.

The television, publishing and digital media company and the NRL have been in discussions for months about an extension of their longstanding broadcast agreement, and while a formal deal has not been agreed or signed, multiple sources on both sides of the talks said they are now at an advanced stage and could be completed in the next fortnight.

The sources, who spoke anonymously because the discussions are confidential, said Nine had last week proposed to pay the NRL more than $115 million annually for its free-to-air rights for five years. If Nine’s proposal is accepted it would be the most lucrative free-to-air network agreement in the NRL’s history and provide the league with more than enough funding to accommodate its 17th team. 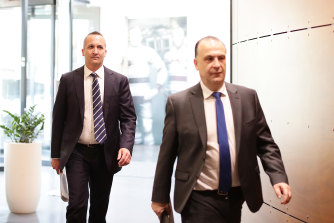 Nine and the NRL both declined to comment. Nine is the owner of The Sydney Morning Herald and The Age.

Nine has been locked in crucial negotiations for the free-to-air rights to NRL matches for months, and presented its plan for the competition to Australian Rugby League Commission chairman Peter V’landys and NRL boss Andrew Abdo two weeks ago. Mr V’landys told NRL’s 16 clubs the meeting was positive.

The NRL made it clear when negotiations started that it wanted a minimum of $115 million annually for a five-year deal, which would align its free-to-air rights with its pay TV deal with Foxtel which expires in 2027.

Nine has a long-standing relationship with the NRL, but the relationship was on rocky ground in August when Mr V’landys told Nine’s executives he was disappointed with promotion of the sport by the company, which in addition to its free-to-air network and publishing assets, owns radio stations such as 2GB in Sydney and streaming service Stan.

The NRL broadcast rights are the most lucrative sporting property to be sold this year. While sports are typically loss-making events for a television broadcaster, they can be used to promote other key programs for a channel and boost audiences and advertising revenue.

The rugby league rights are also an important test for Nine chief executive Mike Sneesby, who commenced his role in March. While Nine has been considered a strong favourite to renew its NRL deal, rival network Seven also expressed interest in the rights (Seven has a close relationship with Mr V’landys through its broadcast deal with Racing NSW, which he leads as CEO).

Pay TV company Foxtel secured a five-year extension of its deal with the NRL last year. The News Corp controlled company also recently agreed to inject more money into the league to fund a 17th team (last week confirmed as the Redcliffe Dolphins) in exchange for more exclusive games involving the Brisbane Broncos. News Corp also owns a majority stake in the Broncos.

The agreement shocked Nine because the Broncos are currently the only team in Australia’s third biggest city and are considered a major ratings draw.

Mr V’landys, in his role as head of Racing NSW, hosted Mr Sneesby, Mr Abdo and other key executives and politicians at The Everest horse race in Sydney over the weekend. News Corp executive chairman Michael Miller, Foxtel boss Patrick Delany, Seven West Media CEO James Warburton and editors from The Daily Telegraph, The Australian and this masthead all attended, where Mr Sneesby was seated next to Mr Abdo.

When Nine last signed a broadcast deal with the NRL in 2015, former chief executive David Gyngell secured rights for all matches in a move that infuriated News Corp and ultimately sealed the departure of former NRL boss Dave Smith.

Foxtel then had to buy five games a week from Nine to show on its dedicated rugby league channel on Foxtel. The deal with Foxtel reduced the cost of Nine’s free-to-air deal to $115 million a season over five years and about $10 million a season in ‘contra’, or free advertising.

However, that deal was discounted last year due to the impact of the COVID-19 pandemic on the competition. The terms of the renegotiated deal were not disclosed, but Nine flagged projected savings of $27.5 million for 2021, and the same amount for 2022.