King Street is defying the odds with an emergence of new tenants that includes a swathe of new vegan-based eateries.

Amid many retail closures across suburban shopping areas, particularly with apparel shops, the growth of inner-city living has seen a resurgence in demand for food and cafe life.

It is a trend that is spreading, albeit slowly, across many neighbourhood shopping strips that became ghost towns after a number of retailers shut down. It reflects more higher-density living where residents don't have cars so prefer to shop and play locally. 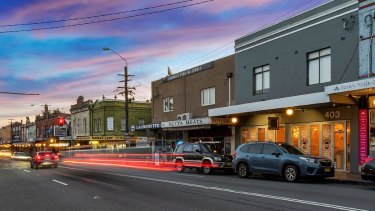 King Street, Newtown, is bucking a trend by catering to locals who don’t own cars.

And with the advent of these new tenants has come a shift in lifestyle, leading to small bars, breweries and restaurants opening up and boosting occupancy rates of once-empty shops.

In Newtown, whose residents years ago banded together to get a McDonalds eatery to close, the northern side is more commercial, with banks and traditional retailers and popular pubs.

The so-called vegan strip is between Goddard Street and Holt Street on King Street and consists of six vegan food offerings next to each other.

Kieran Bourke, associate director at Burgess Rawson, said the best retail strips in Sydney had evolved to accommodate food and beverage offerings that brought people to the precinct day and night.

"This section of King Street has done exactly that with not only local clientele, but also from wider afield, and it is progressively developing an international reputation for those desiring top-quality yet affordable vegan cuisine," Mr Bourke said.

"The prospects for further rental and capital growth in the precinct are exciting and we are still in the early stages of what will be a continuing upward trajectory for this section of King Street."

Rocco Tripodi of Belle Property, who is selling the retail site at 403-405 King Street, said over the past decade, "we have witnessed Newtown grow and thrive on the city fringe".

"Through the gentrification of the suburb and its neighbours, a new wave of residents have made the area home, who have been followed by a mix of national and in some cases multi-national retailers.

"Such demand has seen the southern end of King Street change, as vacancies along the more central part of the strip are at record lows."

In a separate deal, a single residential land holding in Newtown with approval for four terraces and a basement carpark is for sale, with price expectations of around $4 million. It is within walking distance to the King Street dining precinct.

Trent Gallagher of Colliers International and Matthew Fenn of CBRE are handling the sale of 20-28 Munni Street in Newtown, on behalf of a private entity.

Mortgage rates jump for first time in weeks, but still near historic lows: 3 tips to get the best rate