Welcome to Quick Q – Monday’s Media weekly Q&A series dedicated to finding out more about the personalities that matter most in the Australian media landscape.

Every week The Sydney Morning Herald and The Age asks key figures across corporate media, business, sport, federal politics, radio, television and culture to answer a series of questions about their life, careers, hobbies and news habits.

This week’s conversation is with Marina Go, the current chair of Netball Australia, outgoing chair of The Walkley Foundation and Ovarian Cancer Australia. She is the former chair of the Wests Tigers, former editor of Dolly magazine and former general manager of Bauer Media. 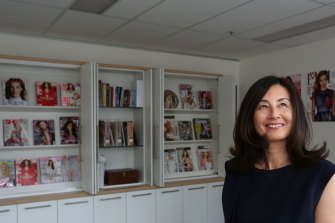 Marina Go is the current chair of Netball Australia and is former chair of the Wests Tigers. Credit:Kirk Gilmour

How did you get your big break?
My big break was landing my then dream job of Editor of Dolly magazine at the age of 23. Jobs like that were never advertised, so I was fortunate that I had a female boss at The Daily Mirror, Features Editor Jennifer Gilbert, who heard about the opportunity through her networks and then recommended me for the job. It was an early demonstration of the impact that a sponsor could have on the career of someone with potential but no networks. I had spent months telling her about my dream of editing magazines ‘some day’, and she was listening.

What are daily news media habits?
I scan Twitter and the Google alerts that I have set for each of the companies that I serve as a director before I get out of bed. Then while having breakfast I scan the news websites that I subscribe to: The AFR, The SMH, The Australian and Crikey, diving into articles that grab my attention. As a co-founder of tonicmag.com.au, I read and share the story of the day. Throughout the remainder of the day I will often read a long form article from The Atlantic, The New York Times or The Guardian.

Which living person do you most admire?
There are many. Wendy McCarthy sits right up there at the top due to her persistent advocacy for better outcomes for women for the majority of her life. She has inspired the work that I do to elevate women and generously launched my women’s leadership book six years ago. Wendy is someone that I can count on for support. She will always have mine.

Your guilty streaming pleasure?
There are so many. I am currently enjoying Only Murders In The Building on Disney+, Ted Lasso on Apple+, Hacks on Stan and The Chair on Netflix. I am looking forward to the third series of Afterlife.

Which phrase do you overuse?
Can’t we do this faster.

What did you want to do when you grew up?
I only recall ever wanting to be the Editor of Dolly magazine, a dream that formed between the ages of 13 and 16.

What was your first job?
My first real job was securities markets trainee at the Reserve Bank of Australia, straight out of school while studying for a business degree at night. But my first casual job was at a local café making donuts when I was 15. It was messy work, but I felt very grown-up earning my own money.

Recommend a podcast…
Ladies Who League podcast – the brainchild of the fabulous Mary Konstantopoulos. As a proud mother I always listen to, and can highly recommend, my son’s NRL podcast They Talk A Good Game. The Catch and Kill podcast was also fascinating.

What’s one vice you wish you could give up?
Ice cream.

The song that’s always on high rotation?
I have been watching the Paul McCartney documentary series 3,2,1 on Disney+ so I have been listening to one of my McCartney favourites Maybe I’m Amazed.

What are you reading?
Ten Thousand Aftershocks by Michelle Tom.

Favourite movie of the past decade?
The Descendants.

Top of your sporting bucket list?
Watching the Diamonds in the Grand Final at The Olympic Games, Brisbane 2032.

What’s the best piece of advice you’ve ever received?
Back yourself.

What are the three things you couldn’t live without?
My two sons and rocky road.