After turning out to vote in record numbers in 2020 despite the COVID-19 pandemic, Native Americans are now one of the biggest targets of Republican-backed voter suppression efforts in states where their votes mattered the most.

Republicans in states with significant Native populations like Arizona, Kansas, Montana and more have enacted new laws that limit voter access in ways that disproportionately impact Native voters. Imposing strict time limits on correcting a mail-in ballot, prohibiting third-party ballot collection, implementing strict voter identification requirements and making it harder to pay for election resources all negatively impact Native Americans in these states, largely due to specific circumstances on reservations where many of them live.

“The laws the state legislatures are passing are lethal to every Native American living in those states,” said OJ Semans, the founder of the Native voting rights group Four Directions and an enrolled member of the Rosebud Sioux Tribe in South Dakota. Such legislation, he said, “is going to knock us back 10 years” after “what we’ve been working through for the last 18 to 20 years to get more and more Native Americans to participate in elections.”

The current GOP-backed voter suppression push comes after Native voters emerged as the key voting bloc in states across the country in determining the outcome of elections for president, Senate and the House. The new wave of laws seeks to take advantage of the existing barriers Native voters face by making them even higher than before.

Native Americans have historically faced significant obstacles to the vote. The U.S. government interpreted the 14th Amendment, passed after the Civil War to grant Black Americans full citizenship rights, to exclude Native peoples from citizenship. Native women were not granted the right to vote in 1920, because Native citizenship was not formally recognized until Congress passed the Indian Citizenship Act in 1924. Even then, voting rights still remained elusive in some areas.

But barriers remain. In 2020, the Native American Rights Fund commissioned a study of obstacles to the Native vote through a series of field hearings and interviews with Native Americans across the country. The report found that they “continue to face a wide array of first generation barriers to voting – actual barriers to voting – that are in fact preventing them from exercising their rights to vote and stripping them of their political power.”

These barriers stem from a host of problems, including lack of adequate translation, underfunded county election departments or even hostile local election officials, unconventional mailing addresses and mail processes, and perhaps most importantly, distance from government resources and high rates of poverty that make travel challenging.

Many of the new voting laws are damaging to Native voters even if they don’t, on the surface, seem to single them out.

“It’s not just policies and laws that specifically target Native voters, of which there are plenty, but some laws and policies that seem neutral have an adverse effect on Native communities,” said Jonathan Diaz, counsel for the Campaign Legal Center, a nonprofit involved in voting rights lawsuits on behalf of Native communities. 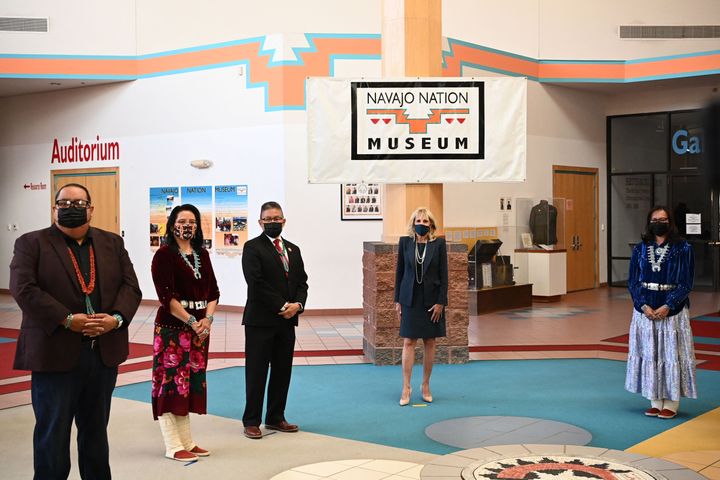 Burdens To Casting A Ballot In Arizona

In Arizona, Republicans’ push to impose new restrictions on the Native vote came after Native communities emerged as the critical voting bloc enabling major Democratic Party victories in the state in 2018 and 2020.

Some Native reservations saw up to 13% increases in turnout in 2020. President Joe Biden’s margin of 11,851 in Apache County, which mostly covers land in the Navajo Nation and Fort Apache Indian Reservation, exceeded his statewide margin of 10,457.

Narrow victories by Democratic Sens. Kyrsten Sinema, in 2018, and Mark Kelly, in 2020, were similarly aided by strong turnout and support in counties with large Native populations. In the House, Democratic Rep. Tom O’Halleran, who represents Arizona’s 1st Congressional District, won Apache County by 12,495 votes, exceeding his district-wide margin of 11,760.

Since then, Arizona has passed restrictive election laws that disproportionately hit Native voters.

One law (S.B. 1003) stipulates that voters who mail or drop off their ballots must correct any unsigned ballots by 7 p.m. on election night. This was a major curtailment of a 2019 settlement agreement between the Navajo Nation and Secretary of State Katie Hobbs, a Democrat, who was represented by Attorney General Mark Brnovich, a Republican, that had allowed corrections to unsigned ballots up to five days after Election Day.

The Republican-controlled state legislature refused to hear public comment on the law prior to its passage. Yet the Navajo Nation sent a letter opposing it, stating that “none of the Arizona counties seats are located on the Navajo Nation, a Navajo voter may have to travel hundreds of miles to add their missing signature to a mail-in ballot.”

Due to high rates of poverty on reservations, unpaved roads and limited access to transportation associated with rural living, and historic underinvestment in election services for Native communities, S.B. 1003 imposes a disproportionate burden on Native voters.

In 2020, the Center for Tech and Civic Life, a nonprofit funded by companies like Google and Facebook and tech-linked funds, provided grants to state and local election departments to help pay for COVID-related expenses and expand voting opportunities. As a result, Coconino County, Arizona, among other counties with large Native populations, was able to expand early in-person voting in Navajo Nation and provide drive-through voting centers.

The ban “could impact the ability [for Native communities] to have early in-person voting or other improvements in the election system to provide just adequate access, because we don’t have equal access,” said Patty Ferguson Bonhee, director of the Indian Legal Clinic at Arizona State University Law School. 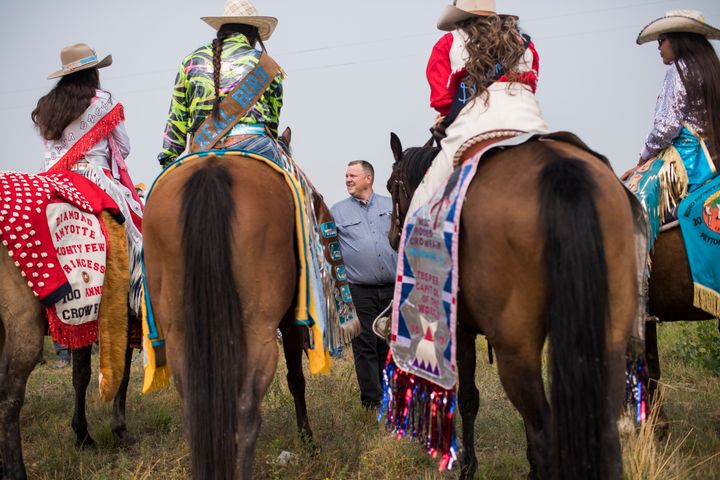 What is happening in Arizona is also happening in Montana, at an even more accelerated pace. Montana Republicans won full control of the state government for the first time in almost 20 years in the 2020 elections. They immediately went about making it harder for Native Montanans to vote.

All of these provisions raise the existing barriers to Native voting even higher.

Native voters in Montana often rely on alternative or satellite polling locations on their reservations. Limiting the registration period and requiring them to travel up to hundreds of miles to an election administrator’s office if they live on a reservation significantly hampers their ability to register to vote and cast a ballot.

The ban on third-party paid ballot collection also disproportionately impacts Native communities. The rural and often-isolated nature of some reservation locations causes slower mail delivery times, which are further delayed by the sometimes untraditional nature of mailing addresses in these areas. People often do not have a street address and instead use P.O. boxes at a central location, or many people on the reservation use the same general mailing address.

Ballot collection makes it much easier for more isolated voters, including those on reservations, to overcome these obstacles and get their ballots delivered on time. It’s often get-out-the-vote groups that do this work, but they are now banned from collecting ballots.

The reason Republicans aim to restrict Native voters in Montana is the same as in Arizona. They have been the key voting bloc in all three of Sen. Jon Tester’s (D-Mont.) election campaigns. For example, in Tester’s first win in 2006, he won the Native vote by 3,481 votes, just a hair short of his total statewide 3,562-vote margin of victory.

“The Native vote in 2020 was a deciding factor in a lot of states and those states are the ones enacting these new laws,” Semans said.

The Supreme Court Is Letting It Happen

As Native communities fight back against these new efforts to suppress their votes, they have found themselves stripped of some long-standing protections.

The Supreme Court’s July ruling in Brnovich v. DNC gutted Section 2 protections of the Voting Rights Act of 1965 by allowing states to enact voting laws that disproportionately impact a racial minority group in a negative manner so long as the impact is, according to the court’s conservative majority, small enough.

“A policy that appears to work for 98% or more of voters to whom it applies ― minority and non-minority alike ― is unlikely to render a system unequally open,” Justice Samuel Alito wrote.

This overrode the intent of the 1982 reauthorization of the VRA that required courts to look at the “totality of the circumstances” in voting rights cases to determine if racial minorities are provided “less opportunity” to vote than whites.

The case was explicitly about Native voting rights since the Democratic National Committee had challenged Arizona Republicans’ restriction on third-party ballot collection similar to the new one enacted in Montana. Thanks to the court’s Brnovich decision that upheld Arizona’s ballot collection restriction, Montana Republicans’ new provision has a greater chance of being upheld as it faces legal challenges from Native voting rights advocates. 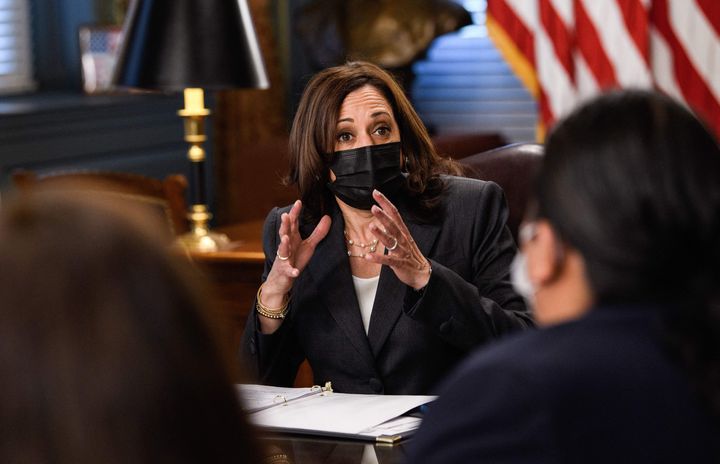 “[Reservations are] very rural and there are many remote communities,” said Allie Young, founder of Protect the Sacred, a Navajo voter mobilization group, and an enrolled member of the Navajo Nation. “Organizers would be able to help if they could go into those communities and take ballots down to the dropbox for them. Now that’s impossible.”

“This is one of the most lethal rulings against Indian country since they made determinations on our treaties,” Semans said.

The ruling, in effect, severely limits, if not cuts off, any hope for legal success in overcoming the new onslaught of voter suppression bills targeting Native communities. That leaves federal legislative action as a sole remedy.

Congress is currently considering two bills that would help overcome the new wave of voter suppression: the For The People Act, which, among many other things, set a national standard for voter access, and the John Lewis Voting Rights Advancement Act, which would reinstate the sections of the Voting Rights Act of 1965 that have been gutted by Supreme Court conservatives. Additionally, a Native American Voting Rights Act has been introduced in both chambers.

But Republicans in Congress, who seek to gain by suppressing Native votes, are universally opposed to the For The People Act, and only one of them, Sen. Lisa Murkowski (R-Alaska), supports the John Lewis voting law. This means these bills can only become law if the Senate changes its filibuster rules that currently require 60 votes for any bill to be debated, let alone passed.

Senate Majority Leader Chuck Schumer (D-N.Y.) promised that voting rights will be the top priority of the Senate when it returns from recess in September.

That will require support from lawmakers who owe their elections to the Native vote, like Sinema, who opposes changing the filibuster rules; Tester, who has been working to craft a For The People Act compromise proposal; and Murkowski, who won reelection in 2010 as a write-in candidate thanks to the Alaska Native vote.

Their votes are now needed to change the rules in order to protect the communities that put them in Congress.