The National Archives and Records Administration confirmed Wednesday that it is working to make publicly available tweets from former President Trump that Twitter has taken down and pledged not to allow back on its platform.

NARA and Twitter have worked closely together for years to keep records of government content posted to the social media giant – but the banning of Trumps’ personal account complicated matters.

“NARA intends to provide public access to all captured and preserved Presidential Record social media, including any blocked or deleted Tweets that have been transferred to us,” a National Archives spokesperson said in a statement Wednesday.

President Donald Trump walks on the South Lawn of the White House in Washington, Sunday, Nov. 29, 2020, after stepping off Marine One. Trump is returning from Camp David. (AP Photo/Patrick Semansky)

Still, Twitter and NARA say their archives are separate and distinct from each other’s, and only the National Archive will be sharing the tweets.

“Twitter is solely responsible for the decision of what content is available on their platform,” the statement continued. “NARA works closely with Twitter and other social media platforms to maintain archived social accounts from each presidential administration, but ultimately the platform owners can decline to host these accounts. NARA preserves platform independent copies of social media records and is working to make that content available to the public.”

A Twitter spokesperson said that while the company would preserve records “in accordance with appropriate laws,” it had no intention of reactivating tweets from the @realDonaldTrump account following his controversial ban in January.

“I can confirm that our teams have been working with NARA on the preservation of Tweets from @realDonaldTrump, as is standard with any administration transition and as we’ve done previously,” the spokesperson said. 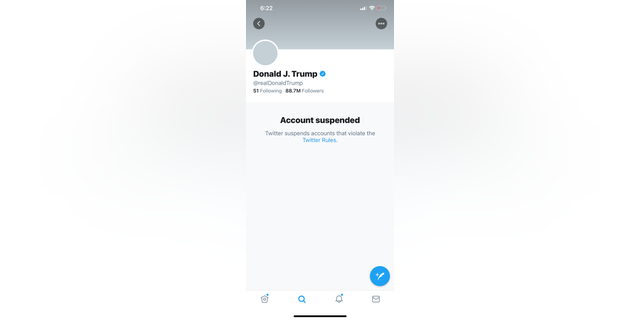 A screengrab of President Trump’s Twitter page in January

Twitter announced it was permanently suspending the former president’s account on Jan. 8, two days after a deadly riot at the Capitol in Washington, D.C. that interrupted the congressional approval process of President Biden’s election.

In a message posted to its site at the time, Twitter identified two tweets Trump made after the riot as allegedly violating its “Glorification of Violence” policy.

“Our determination is that the two Tweets above are likely to inspire others to replicate the violent acts that took place on January 6, 2021, and that there are multiple indicators that they are being received and understood as encouragement to do so,” the missive concluded.

But the move has drawn fierce criticism from free speech advocates on both sides of the aisle, ranging from Trump 2020 campaign adviser Jason Miller to the far-left Vermont Sen. Bernie Sanders.

“Look, you have a racist, sexist, xenophobe, pathological liar, an authoritarian … a bad news guy,” Sanders told New York Times columnist Ezra Klein in March. “But if you’re asking me do I feel particularly comfortable that the then president of the United States could not express his views on Twitter? I don’t feel comfortable about that.”

“Big Tech wants to cancel all 75M @realDonaldTrump supporters,” Miller tweeted back in January. “If you don’t think they’re coming for you next, you’re wrong.”

For years, Trump used Twitter to communicate directly to the American people – bypassing the media and other gatekeepers of information. But some of his more fiery tweets have drawn criticism, sometimes from his own party, but far more often from the left.

Trump’s personal Twitter account had nearly 90 million followers when it was closed. Amid the 2020 presidential election, Twitter began attaching “fact-checking” warnings to some of Trump’s tweets. Messages containing unsubstantiated claims of voter fraud garnered warning tags that read, “This claim about election fraud is disputed.”

Trump’s presidential Twitter account has been archived under the handle @POTUS45 and remains visible on the social media site.

MBA programs are in high demand, but insiders say the job market is tougher than ever. Here's how students have landed roles, and what the landscape might look like post-pandemic.