At a statutory level it was ugly and even if the costs associated with the ongoing remaking of Myer were stripped out it was ordinary. In the context of the difficult retail conditions last year, however, the department store’s first-half performance was respectable.

The retail conditions that prevailed last year and Myer’s trading in the six months to January 25 are now, of course, almost irrelevant. The coronavirus and its impact on retailers and their store traffic is likely to dominate their performances this year and perhaps even beyond, and not in a positive way.

There’s already been supply chain disruption for retailers who source directly. Myer says its container deliveries are four to six weeks behind schedule, although it also says all its suppliers in China will be back in business this week. 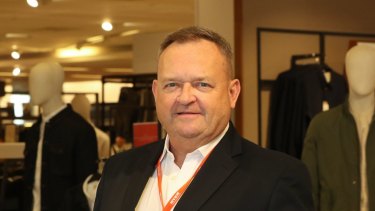 Indeed, Myer chief executive John King sees some short-term cash flow benefits from the virus-inflicted hiatus in supply, allowing him to delay some payments while running down existing inventory.

The longer-term effects of the epidemic on supply and on store traffic as it continues to spread, with chilling effects on travel, consumer sentiment and the broader economy are quite uncertain. All King and his peers can do is focus on the basics of their businesses.

As it happens, Myer is in a period of deep introspection anyway as it continues the five-year turnaround program King initiated after joining the embattled group nearly two years ago. That has meant a heavy focus on costs and, like most retailers, space.

Progress continues to be made even if the 36.5 per cent dive in its statutory profit to $24.4 million tends to disguise that. There is obviously a limit to how far a retailer can shrink to achieve a model that has growing sales and profitability. Costs and space, however, are the two big levers within their control.

Myer’s sales base is still shrinking – it was down 3.8 per cent in the half to $1.6 billion – but the vast majority of that was due to David Jones withdrawing its Country Road brands and the exit of Apple from Myer's stores.

What Myer described as a disappointing performance from its core womenswear offering didn’t help and the continuing reduction in floor space and the closure of its controversial clearance floors would also have had an impact.

The impact on gross profit, however, was modest. It fell only 2.3 per cent while the group’s gross margin improved by 62 basis points to 39.14 per cent.

With its cost of doing business falling 2.6 per cent and depreciation 2.5 per cent, earnings before interest and tax were 1.2 per cent higher at $64.5 million and, as a percentage of sales, rose from 3.8 to 4 per cent.

King has had an intense focus on costs, particularly "above-store" costs, with the cuts to Myer’s administrative functions almost halving the space occupied by its "support office" since he was appointed.

He’s also been shrinking the number of stores and, more particularly the amount of space within them.

With store closures and the abolition of the clearance floors – the major factor in the $13.4 million of "individually significant items" that were taken below the line as Myer dumped in eight weeks stock that would normally have taken 18 months to clear – the group has either reduced its foot print or is in negotiations to reduce it by about 73,000 square metres. 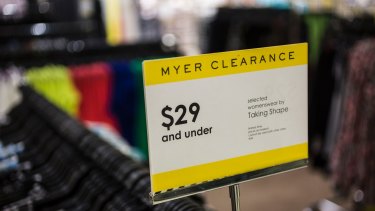 The end of Myer’s controversial clearance floors, store closures and negotiations with landlords to shrink stores will see its total space reduced by 100,000 square metres.Credit:Dominic Lorrimer

King believes that it will get to 100,000 square metres – which he says will achieve the re-basing of Myer’s physical platform – and that the overall 10 per cent reduction in floorspace will provide annual savings of $15 million to $20 million directly with other benefits from reduced staffing, maintenance, utility and cleaning costs.

With the obvious caveat of the external conditions, there is upside in Myer and it’s not only from the continuing reduction in its cost base.

It, obviously, has to improve its womenswear offer but its other departments seem to have performed quite solidly in the conditions. There is a sharper focus on stocking more of the brands that sell best and on adding new and exclusive brands. There is fewer promotional activity.

There’s also upside in Myer’s online business. Despite an ordinary website with limited inventory and, compared to the best-in-class online retailers, crude functionality, Myer’s online sales were up 25.2 per cent to $168.2 million. They now represent 10.2 per cent of its total sales.

King acknowledges the online offer is less than it should be and plans to improve the range, delivery experience, fulfilment processes and infrastructure that sit behind the site and Myer’s stores.

It has been notable that, since King arrived, Myer’s biggest shareholder, Solomon Lew, has largely stopped baiting and critiquing the group even though its share price is languishing around 35 cents.

That probably signals that Lew thinks King is generally doing the things a good retailer should do to improve the basics of the Myer business.

Myer remains a work-in-progress and at some point will need to deliver growth off its diminished sales base if King’s tenure is to be regarded as successful and Myer is finally to be stabilised.

Less than half-way through his turnaround program, however, he still has some time and more to do on the rebasing of Myer’s costs and in-store and online offers before that becomes a more pressing issue.

Beto's back? O'Rourke jumps into spotlight in wake of Texas storm as he eyes another political campaign