A rise in mushroom and berry prices has helped fruit and vegetable giant Costa Group recover from a tough 2019 when it was hit by drought, profit downgrades and a damaging hailstorm.

The company has been buoyed by mushroom prices up by as much as 17 per cent on last year and berry prices up about 15 per cent. 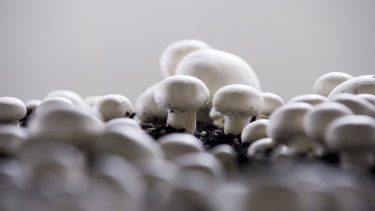 Fruit and vegetable giant Costa has been buoyed by stronger prices and demand for mushrooms.Credit:Rohan Thomson

Mushrooms and berries are key crops for the ASX-listed fresh produce company, and it has invested millions of dollars to expand their production.

Costa reported a 5.8 per cent rise in revenue to $1.05 billion for 2019, but it swung to a full year statutory loss of $35.4 million, compared to a profit of $45 million for 2018. A $61.9 million write-down relating to ageing mushroom facilities that were closed pushed it to a statutory loss.

Total revenue was ahead of Bloomberg consensus, while the company’s $28.4 million underlying net profit before the agricultural accounting standard SGARA and leasing was in line with its guidance and just eclipsed market expectations of a $27.3 million result.

Last year the company endured a series of challenges including lower prices for produce, drought, a number of profit downgrades and it went into a trading halt in October followed by a $176 million capital raising.

But chief executive Harry Debney said he was "very encouraged" by the position the company was in today, citing better prices for produce, full dams after heavy rainfall, strong interest among international buyers for its citrus crops and strong demand from retailers.

"The market pricing, particularly in mushrooms and berries is quite encouraging. It's firmed up quite considerably on last year," he said.

"We were very challenged like a lot of other people late last year and early in the season (with water), but January/February, all of the sites we had problems with… we've now got full dams everywhere. And we've also pre-purchased enough water to get us right through the calendar year to December in citrus. So water security is very good for us," he told The Age and The Sydney Morning Herald.

In a bid to boost water security Costa is expected to soon seek approval from NSW authorities to construct a second dam at its Guyra tomato glasshouse facility. Costa last year paused the planned expansion of its Guyra glasshouses, citing concerns over water security.

In a note to clients UBS analyst Ben Gilbert said Costa had delivered an "in-line 2019 result", reiterated its guidance and had a positive start to the 2020 financial year.

The market welcomed the Costa result, pushing its shares up 4.9 per cent to close at $3. It will pay a fully franked final dividend of two cents per share on April 8.

Costa said its 2020 net profit before SGARA and leasing would be in line with its 2018 result, of $56.6 million. But Costa said it was too early to assess the impact on its performance from coronavirus, and that early estimates suggested a lighter citrus crop would be produced although rainfall over coming months might improve the crop.