MSNBC host Chris Hayes said that this year’s Conservative Political Action Conference showed that the current Republican Party appeared to be more fixated on perceived injustices rather than actual policy.

Speaking with New York Times reporter Elaina Plott on Friday, Hayes said that this was apparent from the theme of the conference — “America Uncanceled.”

“So much of what they are railing about was about things that aren’t even political …or have to do with governing,” Hayes said, describing the conference’s first day. “They’re mad that there’s a disclaimer on ﻿the Muppets … or Mr. Potato Head. Or whatever cultural grievance. But nothing that you could write a bill to deal with. That seems to me the thrust of much of what this sort of grievance and anger has been throughout the first day.”

Donald Trump Jr. was the CPAC speaker who railed on about 18 episodes of “The Muppet Show” receiving a disclaimer for “negative depictions and/or mistreatment of people or cultures” on Disney+, arguing that liberals had “banned the Muppets.” 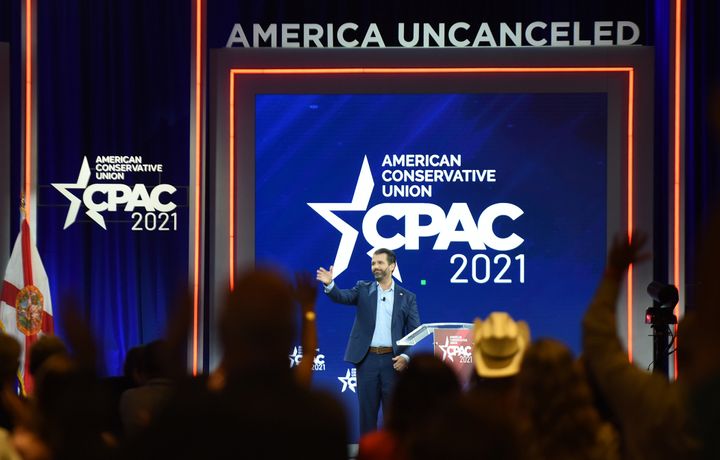 Meanwhile, Florida Rep. Matt Gaetz echoed similar concerns about Hasbro’s impending release of a gender-neutral Potato Head toy, arguing that it represented “cancel culture” — while at the same time attempting to crack a joke that Mr. Potato Head was “America’s first transgender doll” due to his movable parts.

Plott agreed with Hayes’ assessment of the conference, pointing out that “it was large-scale cultural grievances that animated President Trump.”

“CPAC has only affirmed that this will only continue to define the future of the party,” Plott said.

Legitimate criticism of President Joe Biden’s COVID-19 stimulus package could have been a noteworthy topic of discussion on CPAC’s first day, Plott added, but conference speakers and attendees appeared to be more interested in talking about a rigged election, a belief which “has become canon with the Republican party’s base.”

“The extent to which the pandemic or the coronavirus was mentioned at all, it was usually framed as a way of making fun of pandemic-related restrictions,” Plott said, pointing out how Sen. Ted Cruz (R-Texas) had mocked mask-wearing during his speech and how a host of CPAC attendees booed when they were told they needed to wear masks within the conference’s Orlando venue.

Watch Hayes’ discussion with Plott below, courtesy of Mediaite.

Pension warning: The unauthorised payments that can trigger a 55% charge