It's the type of corporate mystery that has become all too common for ASX-listed tech stocks — why is there so much hype around a company when its financial performance is so meagre.

Take Brainchip. The company that is proming to produce computer chips that mimic the workings of the human brain reported in August a $6.86 million loss on revenue of just $13,397 for the half year ending June 30 — an 80 per cent drop on revenue generated in the prior first half.

The report also outlined circumstances which would cast uncertainty on its ability to continue as a going concern.

Two weeks later the market valued the group at more than $1.5 billion.

The stake held by BrainChip's Perth-based founder and chief technology officer, Peter van der Made, had soared from $8.8 million to more than $170 million in a matter of months.

Even by the standards of the current market frenzy it was an astounding run and BrainChip chief executive Louis DiNardo did not hide his bemusement. 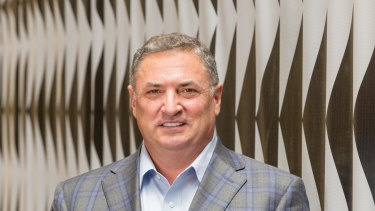 Louis DiNardo, the Brainchip CEO, says the company expects to have the first commercial contracts for its neural network processor by early next year.Credit:Rick Stevens

"Yes I would say I was taken aback to watch the price go from single digits to teens, 15-16c, it peaked in intra day trade at 97c a couple of weeks ago," he says.

The shares have since fallen back to 42c.

But the tech industry veteran is not baulking at the current market valuation of around $700 million based on what is ahead for BrainChip, particularly its promise as a pioneer in the field of neuromorphic computing which mimics the neuron spiking functions of the human brain.

"I do believe it’s based on deliverables that we committed to, delivered on time, and show a clear line of sight to having a commercially successful product,” he says.

BrainChip says it is close to commercialising this new computer chip architecture in a world where the internet-of-everything is taking shape before our very eyes.

Neuromorphic chips can process data much faster and more efficiently than traditional computer processors. This is why giants like Intel and IBM are investing in the sector which is expected to grow to a $US65 billion ($92 billion) market by 2025.

Its faster processing and energy efficiency advantages make it a clear winner in a world where everyone from electric car manufacturers to drone and surveillance companies need to make sense of vast amounts of information at the edge of networks rather than sending back to a central area to process.

One example given is a neuromorphic chip sitting by the high definition cameras on an e-vehicle. The processor crunches the information on-the-spot to work out whether an object it has detected is a child, or a ball, and sends a message to the car's computer to work out: 'Should I stop' .

"What we find the large business opportunity to be is that transcends multiple markets, you can look at consumer goods, smart home applications, … automobiles, drones, medical instrumentation, medical diagnostics," says DiNardo.

And there is plenty of room for a player like BrainChip he says.

"You don’t need a lot of market share to build a big company, so we’re being somewhat selective about our target markets and applications. And fortunately for us, after a lot of hard work, we now have chips in hand. It’s not just about PowerPoint presentations .. we’ve actually got chips," he emphasises. 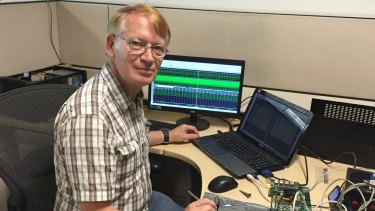 Founder and chief technology officer of BrainChip, Peter Van Der Made, has spent more than a decade investigating how the brain works and working out how to synthesise it digitally.

Shaw and Partners analyst Danny Younis says the promise of commercialisation is driving the recent attention.

"The market is getting very excited by the increasing validation of Brainchips’s key product, the super-fast, ultra-low power and low latency spiking neural network processor, AKIDA, driven by a stream of very positive news that is driving AKIDA closer to commercialisation," he says.

This includes recently announced collaborations with companies like US-based Vorago Technologies for a Phase 1 NASA project it is working on, as well as two auto manufacturers – Valeo in Europe and an unnamed partner in the US automotive heartland of Detroit.

DiNardo says the company expects to be in a position to announce contracts to license its intellectual property to customers in the first half of next year.

"Those licenses are probably more near term than large volume chip sales which will take time," he says.

"As we get into the later part of 2021 we should start to hit our stride with chip sales, that’s six-to-nine months away."

Pitt Street Research managing director Marc Kennis says this is where the market will be able to provide a proper valuation of the stock.

TMT valued BrainChip at 45c last year when its share price was just 4.1c, but this was based on what larger rivals like Intel were paying for companies with a similar profile to BrainChip.

He says the fact that a semiconductor-based company like BrainChip is a rarity on the ASX makes the job of convincing people it is not just a pump-and-dump stock that much harder.

"I think that's totally unfair for a company like BrainChip," says Kennis who thinks it is fairly valued at the current 41c share price.

But the real moment of truth is at hand if commercial contracts are announced as planned.

"What is needed, to get to the to the next level, are commercial deals … it will give some idea of what the revenue model looks like," he says.

"We can do the math around these contracts."

BrainChip's focus is also on the revenue it is looking to finally generate.

"The shareholder base is more interested in seeing top line revenue growth," says DiNardo. Investors include US investment group, LDA Capital, which agreed to a put option which will provide BrainChip with up to $29 million of funding as needed in return for stock.

Trump says coronavirus treatment could be ready before true vaccine