LAS VEGAS ― Former New York City Mayor Mike Bloomberg emerged from behind the protective shield of a $300 million-plus advertising blitz on Wednesday night, stepping into the limelight of a nationally televised debate alongside five rivals spoiling for a fight.

The result wasn’t pretty. The media and financial services mogul got pummeled in the presidential debate over his record of allegedly sexist comments and behavior, his racist policing practices, his failure to release his tax returns, his support for Republicans, and his efforts to buy his way into the Democratic primary.

“I’d like to talk about who we’re running against, a billionaire who calls women fat broads and horse-faced lesbians. And no, I’m not talking about Donald Trump. I’m talking about Mayor Bloomberg,” Warren said, prompting audible gasps from the audience at the Paris Theater.

Bloomberg’s alleged treatment of women went on to become the richest source of material for his adversaries.

Moderator Hallie Jackson initiated the biggest fireworks of the night when she asked Bloomberg to explain his comments defending allegations from former female employees who say he created a hostile work environment. Bloomberg, she noted, reportedly defended some of his sexist comments by saying, “That’s the way I grew up,” and allegedly told one former female employee, “I would do you in a second.”

Bloomberg was visibly flustered, asking for his full minute and a quarter to respond. But he did not address the specific claims, instead falling back on figures demonstrating the success of women in his corporate empire.

“I am very proud of the fact that about two weeks ago, we were voted the best place to work ― the second-best place in America,” he said. “If that doesn’t say something about our employees and how happy they are, I don’t know what does.”

Jackson turned to Warren, noting that the senator had been especially critical of Bloomberg.

“I hope you heard what his defense was: ‘I’ve been nice to some women,’” she said, prompting loud applause and cheers from the crowd. 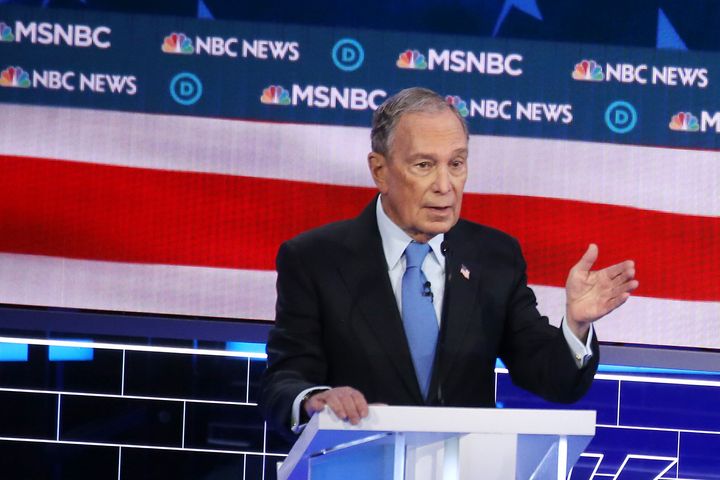 Warren went on to ask Bloomberg whether he would commit to releasing former female employees from the nondisclosure agreements he had required them to sign.

Bloomberg did not, but struggled to give a reason. “That’s up to them,” he said. (It’s not.)

“We are not going to beat Donald Trump with a man who has who knows how many nondisclosure agreements and the drip, drip, drip of stories of women saying they have been harassed and discriminated against,” Warren said.

Former Vice President Joe Biden joined Warren in calling on Bloomberg to release the women from their NDAs.

“Let’s get something straight here,” Biden said. “It’s easy: All the mayor has to do is say, ‘You are released from the nondisclosure agreements.’”

When it came to Bloomberg’s tax returns, which the candidate has yet to release, his explanations were similarly sheepish. “It just takes us a long time,” he said, eliciting gasps from the audience. “I can’t go to TurboTax.”

Bloomberg promised to release the tax returns as soon as were are ready, saying they would be made public in the coming weeks.

Sen. Bernie Sanders (I-Vt.) made sure to remind the audience that Bloomberg supported then-President George W. Bush’s reelection, as well as Republican control of the Senate, in 2004.

Later, when Sanders asked to explain why he opposes the mere existence of billionaires, the senator pointed to Bloomberg. The former mayor is reported to be worth an estimated $60 billion.

Bloomberg, who opposes the wealth tax that Sanders and Warren hope to levy but insists he does want to see the rich contribute more, defended his earnings.

“Yes,” he replied enthusiastically when asked whether he deserved his wealth. “I worked very hard for it. And I’m giving it away.”

For former South Bend, Indiana, Mayor Pete Buttigieg, Bloomberg occupied a place previously reserved for Biden: He was the foil for Buttigieg’s image as the happy medium between the party’s left and right ideological poles.

Buttigieg pleaded with the public not to winnow down the field to two candidates whom he said were uniquely polarizing and not rooted in the Democratic Party. Sanders remains an independent who caucuses with Democrats, and Bloomberg was a Republican before becoming an independent and then a Democrat in 2018.

The debate, which was by far the most contentious meeting of the primary, contained its fair share of other skirmishes. Buttigieg and Minnesota Sen. Amy Klobuchar exchanged blows over their respective qualifications for higher office, as well as some of Klobuchar’s controversial votes. And, of course, the field of candidates slugged it out over “Medicare for All” for the umpteenth time, with the moderates pointing to Warren’s and Sanders’ support for single-payer health care as bad policy and politics.

But the overwhelming theme of the night was who would be most electable against Trump. And whatever their differences, with their relentless attacks on Bloomberg and his less-than-stellar responses, Bloomberg’s rivals united to make the case that it was not him.