Like Princess Diana alone on the bench at the Taj Mahal, the enduring image from Prince Philip, The Duke of Edinburgh’s funeral, is dignified Queen Elizabeth alone in St. George’s Chapel; at times, far bent over in prayer in her pew, her large black hat pitched forward like a shield.

At 94, the Queen now stands alone. Those who shared her life experience, father, mother, sister and now husband, all gone. No one left to call her by her first name. Her hand written note on the flowers to her husband appears to be signed, “Lilibet.” 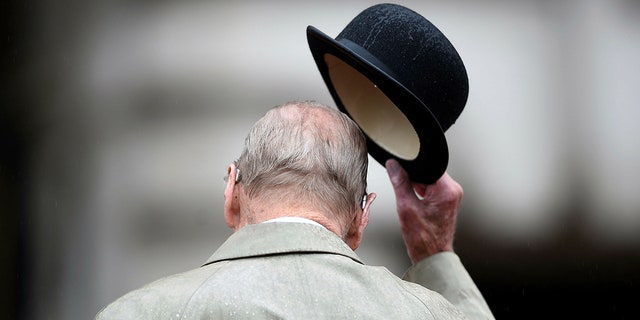 Becoming husband to a woman who was not expected to be Queen, but suddenly was, Philip did what men of his era did. His duty. It was not without struggle against the gravity that pulled him away from the sea and his freedom. His early intransigence, and perhaps transgressions, in the end, deepened his character. The Queen called him, “her strength and her stay.” The young man who craved an adventurous naval career, matured and so did their marriage, their steadfastness, tolerance and love, for 73 years.

It is the “sacrifice” that has become so rare and unheralded in our time of serial emoting and sharing ‘our truth.’ Especially unacknowledged sacrifice. He once was asked if it was very difficult to leave his career behind, and said “Not very difficult really, but disappointing.’ That was major sharing for the Duke. Even to his final ceremony, his funeral, he eschewed fuss. There was no fawning, no eulogy, no sermon, just Ecclesiasticus acknowledging that God is in charge, not us. This passage chosen by Philip.

“By the power of His thought He tamed the deep and planted it with islands. Those who sail the sea tell stories of its dangers, which astonish all who hear them, in it are strange and wonderful creatures, all kinds of living things and huge sea monsters. By his own action he achieves his end, and by His word all things are held together.”

In the end, it is our lives, our actions that do the talking for us. That’s what the ‘greatest generation’ of which Philip, a WWII hero, was a part, believe. That’s the measure the next generation was held to today in the still, grand, bannered ancient chapel.

PHILIP, ELIZABETH’S MARRIAGE WAS BASED ON MUTUAL RESPECT

Even his pandemic-marked funeral, had a feeling of war-time Britain. A near empty St. George’s with a distant, sparse, acapella (sp?) choir. The camera, a window to a small family funeral. Where some, including Prince Harry, sat alone with their thoughts. Having left all this behind, now he was back home, as the Archbishop of Canterbury who married he and his wife a few short years ago, praised the Duke’s “faith and loyalty…his life of service to the Nation.”

But this loyal Prince Philip was also known for his salty, off-color and even offensive banter. Philip by all accounts didn’t care too much what anyone thought of him, and so he spoke his mind. Prince Harry said everyone hung on his words, often because ‘you never knew what he might say next.” He called his grandfather “cheeky until the end.”

Prince William praised the Duke’s other side, writing: “My grandfather was an extraordinary man and part of an extraordinary generation. Catherine and I will continue to do what he would have wanted and will support The Queen in the years ahead. I will miss my Grandpa, but I know he would want us to get on with the job.”

The two prince brothers who 24 years ago, etched their sadness in the hearts of millions, walked apart today behind their grandfather’s hearse. But after the tribute to his life, they found each other and walked for a time together. As Philip said to them years ago, encouraging them to pay tribute to their mother by taking that hard path behind her body, “If you walk, I’ll walk.”

(With apologies to the Bard) Goodnight, sweet and salty Prince Philip.