Louisiana authorities are cracking down on an evangelical pastor who drew hundreds to his worship services this week, openly flouting the governor’s ban on large public gatherings.

Rev. Tony Spell, pastor of Life Tabernacle Church in the small city of Central, faces six misdemeanor counts for refusing to abide by Gov. John Bel Edwards’ orders during the coronavirus pandemic, the Central Police Department said Tuesday in a statement on its Facebook page.

Prosecutors said Spell, a Pentecostal preacher, has held at least six gatherings that exceeded the 10-person limit set by the Democratic governor, WAFB reports. Each count carries a maximum penalty of six months in jail and a $500 fine, per the Associated Press.

Life Tabernacle Church, which is located in a suburb of Baton Rouge, has used its fleet of buses to bring hundreds of congregants from around the region to attend services throughout the week, according to the Los Angeles Times. Over 1,200 people allegedly attended morning services this past Sunday.

Central police chief Roger Corcoran said in his Tuesday statement that he worked with state authorities and Family Research Council President Tony Perkins, an evangelical ally of President Donald Trump, over the past two weeks to try to “address this matter outside of legal action.” But Spell has made it clear that he intends to continue to violate the law, Corcoran said.

“Mr. Spell will have his day in court where he will be held responsible for his reckless and irresponsible decisions that endangered the health of his congregation and our community,” the chief said. “This is not an issue over religious liberty, and it’s not about politics. We are facing a public health crisis and expect our community’s leaders to set a positive example and follow the law.”

For his part, Spell claims that he is being persecuted for his faith. 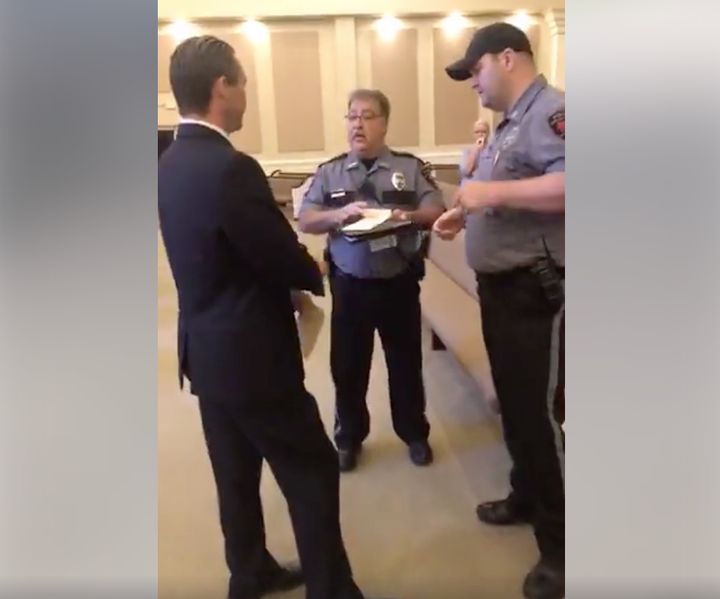 On Tuesday, the pastor shared a video recording made by his father, Rev. Timothy Spell, on Facebook. The video shows Corcoran and another officer walking down the church’s nave to issue the misdemeanor summons. Standing near the altar in a suit, Tony Spell prays for the officers, the governor and the country.

“I pray that the spirit of God will reveal to [the governor] that I’m exercising my First Amendment rights and my freedom of worship and my freedom of religion rights,” Spell prays as the officers bow their heads. “God help our nation today. Let them know that I’m exercising my mandate commanded to me by Jesus Christ to preach the gospel and to assemble as a people of God in this congregation.”

After the officers leave, Spell speaks into the camera to insist that he will continue to hold church services in defiance of the governor’s orders and the charges.

“I’ve heard from God and I will continue to do what I’m doing,” Spell says in the video.

Close to 240 people in the state have died from COVID-19, the illness caused by the coronavirus, according to Louisiana’s Department of Health. The governor issued an order on March 22 directing all residents to leave their homes only for essential needs. Houses of worship are not on the state’s list of essential infrastructure.

Most houses of worship in the U.S. have shut down in-person events and moved services online, but a minority have refused to heed state and local restrictions and federal guidelines on public gatherings.

Some of those outliers are now facing pushback from authorities in other states as well. In Florida, a megachurch pastor was arrested on Monday for holding worship services that defied state orders to limit gatherings.

The First Amendment’s free exercise clause protects Americans’ right to practice their religion. Congress and several states have passed religious freedom laws that build on that concept, ensuring that any attempt to override a person’s religious freedom must serve a compelling governmental interest that can’t be achieved in another way.

But these religious freedom laws may not protect pastors like Spell who want to ignore emergency orders to limit gatherings during the COVID-19 epidemic, legal experts told HuffPost.

Even though banning church members from congregating is a substantial burden on religious people, the pandemic has created emergency circumstances, explained Caroline Mala Corbin, an expert on the First Amendment’s speech and religion clauses at the University of Miami’s School of Law.