Parents in Virginia’s Loudoun County are hammering the county’s school board and the Department of Justice (DOJ) Thursday as controversies cascade in the school district that’s become a national political hotbed.

For months, parents in the school district just outside the nation’s capital have protested and pressured school administrators over critical race theory (CRT) teachings and mask mandates, including in testy school board meetings. Debate in Loudoun County and others around the country recently led to a controversial DOJ memo instructing the FBI to look into alleged threats against school board members – something many activist parents see as an attempt to label them domestic terrorists.

Meanwhile, a Loudoun County parent is alleging that Loudoun County Public Schools’ (LCPS) transgender bathroom policy resulted in his daughter being sexually assaulted by a skirt-wearing male student in a girls’ bathroom. The father of the girl alleged to Fox News that the school board tried to cover up the alleged assault, which was first reported by The Daily Wire.

LCPS said in a statement Wednesday that it reported the allegations to the Loudoun County Sherriff when the alleged incident happened and is not involving itself in the process “until law enforcement advises LCPS that it has completed the criminal investigation.”

The Loudoun County sheriff’s office previously told Fox News, “We can confirm a May 28, 2021 case that involved a thorough 2-month-long investigation that was conducted to determine the facts of the case prior to arrest. This case is still pending court proceedings. The Loudoun County Sheriff’s Office is not able to provide any documents that pertain to a pending case.” The sheriff’s office also confirmed that the case involved sexual assault.

Ian Prior, executive director of Fightforschools.com, a former senior official in the Trump DOJ and a LCPS parent, held a press conference Thursday afternoon to address the “failure” of LCPS to properly address a series of various incidents, including the alleged sexual assault, over the last several months. 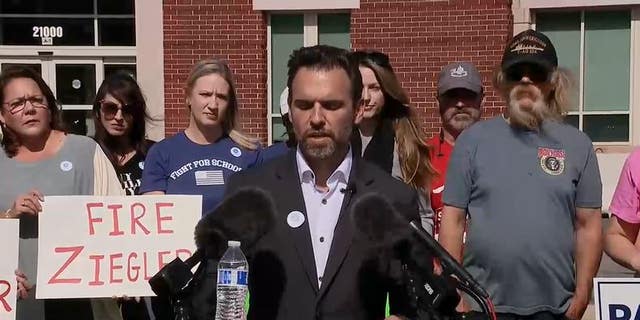 Ian Prior speaks outside of the Loudoun County Public School Administration building in Ashburn, Virginia.

Prior was joined by close to 30 Loudoun County parents during the press conference during which he called for the firing of the superintendent, Dr. Scott Ziegler, and for an independent investigation into Loudoun’s system failures. In addition, Prior called for Attorney General Merrick Garland to investigate LCPS for possible Title IX violations.

A handful of parents held up signs in support of “Parents for Youngkin,” the Republican candidate for governor in Virginia. Another parent wore a red shirt saying “Stand Up For Virginia” and one woman was wearing a black shirt that said “My Child My Choice.”

“Fire Ziegler” signs were also prominently displayed behind the podium.

LCPS did not immediately respond to Fox News’ request for comment on the allegations made by Prior during the press conference.

One woman who claimed to be affiliated with the Loudoun County Democratic Committee got into a heated exchange with a few conservative parents after the event concluded. She also loudly disagreed with many of the statements made by Prior throughout the press event.

She stated that she did not attend the event to defend the actions of the accused assailant, but that they deserve an investigation and it shouldn’t be a witch hunt. The woman later clarified to Fox News after the event that while she is a member of the LCDC, she was at the event in her personal capacity.

“For far too long Fight For Schools has been using our children as political props, campaigning with Republican insurrectionists like Dave LaRock and seeking to defund our public schools. It is disgraceful that they would seek to weaponize an event before we, as a community, have a comprehensive view of the facts. It is clear that rather than respect the victims and the legal process, they are intent on creating fear and division for their own political gain.”

Amazon tells employees to delete TikTok immediately—then takes it back

Britons reveal how they radically slashed their everyday living costs