Lendlease boss Steve McCann will retire after 12 years in the top job at the listed property developer and be replaced by the group’s Asia head Tony Lombardo.

Mr McCann will leave the company at the end of May after working at the developer for 16 years.

During his tenure, Lendlease’s global development pipeline has grown to more than $110 billion and the company has shifted focus away from large engineering projects to deliver 22 major urbanisation projects in 10 cities around the globe. 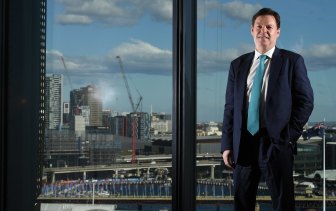 Lendlease CEO Steve McCann will leave the company at the end of May.Credit:Peter Rae

“The onset of COVID-19 delayed Steve’s planned retirement as he led the group’s response to the pandemic,” Lendlease chairman Michael Ullmer said.

The shakeup at the top of the $8.24 billion company follows the departure of Lendlease’s former chief financial officer, Tarun Gupta, who will take over as chief executive in June from Mark Steinert at rival property developer Stockland.

Mr Lombardo will start in the top job when Mr McCann departs. Trained as an accountant, he spent almost 10 years at GE Capital before joining Lendlease in 2007 and going on to spearhead its Asia growth strategy based in Singapore.

The company’s operations were hard hit by the pandemic last year when it reported a slump in profits to $96 million, sharply down from the $497 million it booked the previous period.

The business was also hit with a significant loss on the sale of its trouble engineering arm to Acciona and has been grappling with scope and cost overruns at its Cross Yarra Partnership consortium that is building the Melbourne Metro Tunnel Project. 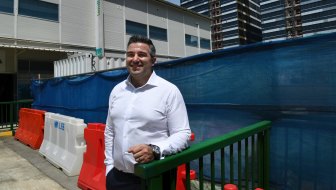 Tony Lombardo joined Lendlease in 2007 and has gone on to spearhead its Asia growth strategy based in Singapore.Credit:Kate Geraghty

Macquarie Bank analysts said the recent resolution of the Melbourne Metro negotiations with the Victorian government may have been a “catalyst for the timing of Mr McCann’s retirement.”

A key focus for the new chief executive will be simplifying the business. “As part of this, the group would look to recycle about $1 billion of capital from the sale of telecommunications, solar farms, services, and retirement.”

“We believe continued simplification to allow focus on the group’s core offering would be beneficial,” analysts Stuart McLean and Caleb Wheatley said.

Brexit Enters Its Endgame With a Defining Call for Boris Johnson