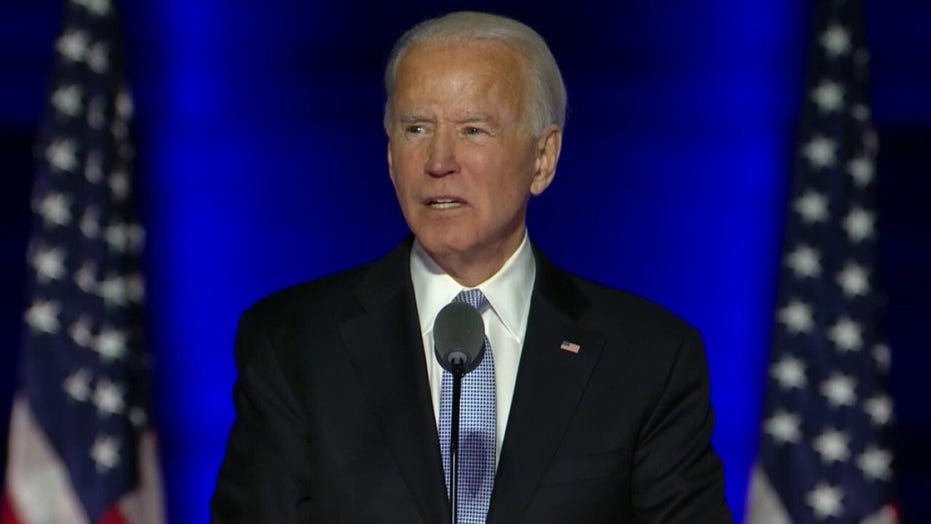 If Biden really wants to bring the nation together, he could start by proving to the satisfaction of all voters that his election was free and fair.

He should encourage a recount in those states, like Georgia, which remain too close to call, and join the Trump campaign in investigating possible chicanery in Pennsylvania and computer “glitches” that reportedly boosted Biden’s winning tally in Michigan.

Almost certainly a review of ongoing election controversies will not change the outcome; the former vice president will likely remain the president-elect.

Still, demanding transparency would be a good beginning for Biden. Taking an office that millions of Americans believe you “stole” will only deepen our country’s divide.

But imagine the blowback he’d get from Washington Post columnist Jennifer Rubin, who tweeted:  "Any R now promoting rejection of an election …  should never serve in office, join a corporate board, find a faculty position or be accepted into 'polite' society. We have a list."

Joe sure doesn’t want to be on Rubin’s “list.”

Biden could also help heal our nation by denouncing Democrat Alexandria Ocasio-Cortes’ threat to archive tweets challenging the election outcome from “Trump sycophants,” presumably to face punishment in the future, along with similar comments by failed presidential candidate and never-Trumper Evan McMullin.

Biden should remind these folks that 71 million Americans voted for President Trump; that’s a long list of “enemies.”

Most likely, Biden will do none of these things. He’s terrified of the progressive wing of his party, and rightly so. By not sitting out the election in a pout, the Bernie Sanders brigade helped carry Biden over the finish line. He owes them; they will demand payback.

If, down the line, there is a movement to eject a failing Joe Biden from office and replace him with uber-liberal Kamala Harris, it will not be led by the GOP; it will be led by progressives like AOC.

Biden will not bring our country together. He will struggle mightily to bring his own party together. Instead, he will remain effectively silent, as indeed he has been for months.

Yes, he will make obligatory speeches, as he did on Saturday night, celebrating his win. But he won’t say anything of substance; rather, he will cleave to the cliches that got him elected.

Our new Platitude President will proclaim there are no red states or blue states but only the United States, an assertion that will crumble when he tries to dismantle our oil industry.

He will promise to vanquish the coronavirus, which will resonate until his new task force, to be announced shortly, advocates much the same program already underway.

It will only be as the president-elect begins to assemble his cabinet that the country will finally get a sense of who and what is running the Biden show.

Is it the Obama holdovers who are putting Susan Rice up for secretary of state? Is it the Sanders crowd, which is pushing Elizabeth Warren for Treasury secretary?

Trouble is already brewing in the Democrat camp, as moderates in the House blame far-left rhetoric and extreme progressive policies for losing at least a half-dozen seats.

What we do know is that with every pick, Biden will alienate some Republicans, to be sure, but he will infuriate some Democrats as well.

Trouble is already brewing in the Democrat camp, as moderates in the House blame far-left rhetoric and extreme progressive policies for losing at least a half-dozen seats, leaving Speaker Nancy Pelosi, D-Calif., with the slimmest majority in 18 years.

In a recent three-hour phone call among House representatives reported by the Washington Post, members of the Blue Dog Coalition accused the Justice Democrat-backed progressives for the loss of House seats won in 2018. They say running on “defund the police” or the Green New Deal undermined the party.

Members of “the Squad” like Pramila Jayapal, D-Wash., co-chairman of the Congressional Progressive Caucus, pushed back, arguing that the far left helped built the turnout in urban areas that carried Biden across the finish line.

This fight is just beginning. Coupled with likely ongoing GOP control of the Senate, Biden will have his hands full.

The president-elect will struggle to push through his proposed $4 trillion tax increase, without which many of his progressive promises will disappear. Making college free, forgiving student loans, implementing parts of the Green New Deal – all will likely die on the doorstep of a Republican Senate.

Progressives will become impatient and will attempt to eject more middle-of-the-road Democrats from office. The 2022 elections could see an all-out war in the Democrat Party.

Meanwhile, the liberal media, which proved Biden’s most munificent benefactor during this election, will drop their obsequious and dishonest coverage of the president-elect, because fawning coverage will not sell newspapers or TV ads.

Finally, Donald Trump is not going away. The country may indeed be ready to tone down the rhetoric, but Trump supporters will not quickly forget the insults and charges of racism, sexism and all the other “isms” that they and their president endured.

Moreover, Trump’s impact on the country and the Republican Party has been profound and poses an ongoing challenge to Democrats.

Trump spoke common sense on issues ranging from pressing NATO to kick in more for their own defense to bringing Israel and Arab states together to fend off Iranian aggression.

If Biden tries to backtrack on such policies, he will look foolish. Biden will also run into opposition if he tries to soften Trump’s tough line against China’s unfair trade practices and theft of American know-how.

Also, Trump spotlighted the dishonesty of the liberal media and social media’s outsized and dangerous role in censoring our nation’s discourse. Distrust of both mediums could prove consequential in the next election as voters ignore polls and predictions.

We hope, as everyone should, that Joe Biden is able to bring us together. But uniting a country requires leadership and strength. We have yet to see either from Joe Biden.

Trump fires back at Cuomo after coronavirus criticism in DNC speech