LHC Capital, the only significant external investor in iSignthis, told investors its December quarter performance plunged into negative territory after it halved the carrying value of its $90 million investment in the controversial tech stock after an independent valuation.

In an update to investors last month, LHC principals Stephen Aboud and Marcus Hughes, said the $400 million LHC Australia High Conviction Fund (LHCAHC) cashed in some of its iSignthis shares ahead of the controversial stocks ten-fold gain in September last year.

The fund said the share sale took "much of our initial risk capital off the table," but maintained an "oversized position … commensurate with our view of the large long-term potential value of the business." 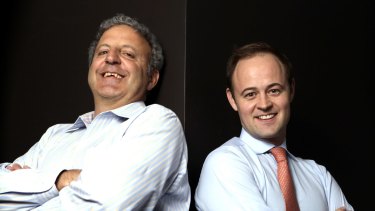 The fund made a negative 11.2 per cent return for the December quarter due to the write-down.

"As shares in iSignthis have not traded for three months, and iSignthis have stated that the suspension has had an impact on its growth trajectory, LHC determined it appropriate for an independent expert to value the LHCHCF's current holding in iSignthis," said LHC's annual letter to investors.

"The valuation was struck at a price that was greater than 50 per cent below the last traded price, and the trustee has adopted this valuation for unitholders."

LHC maintained its support for the stock which at one stage may have accounted for as much as 22 per cent of the fund's investment.

"iSignthis is a business we are happy to own over the long term. Management are continuing to run the business irrespective of the suspension," said LHC which topped the hedge fund returns tables in 2018-19.

An investor in the LHC fund, Auckland-based King Tide Asset Management, is offering cautious support for LHC despite the iSignthis “outlier” contributing significantly to its negative return for the December quarter.

“In speaking with Stephen [Aboud], he is holding his supportive view of the business, however other managers we have talked to have very different opinions. Only time will tell,” said King Tide in its latest investor update.

King Tide reported that the write-down of LHC’s investment reflected a "suspension discount" rather than a change in the underlying business.

iSignthis was forced into an indefinite trading halt in October by the ASX and the Australian Securities and Investments Commission (ASIC) amid ongoing inquiries into the company. The ASX queries appear to focus on the June 30, 2018 half year when company insiders were awarded hundreds of millions of shares.

The response to one ASX query revealed that iSignthis had misclassified most of its revenue for the contentious half-year period ending on June 30, 2018.

The mistake could have significant consequences for iSignthis, which was warned by the market operator that such errors could be a criminal offence under the Corporations Act.

LHC did not respond to requests for comment about quarterly redemptions from its flagship fund. Links to previous reports of the fund's performance have been removed.

The founder of popular vitamin brand Ritual was denied funding by a prominent VC for being pregnant — and went on to raise over $40 million. She shares how she found investors who believed in her company.

McConnell announces opposition to bill that would create Jan. 6 commission