A MYSTERIOUS message carved into a rock face in France in the 18th century has finally been deciphered.

The inscription in a cove near the village of Plougastel-Daoulas describes the tragic death of a sailor called Serge more than 230 years ago.

Residents at the village held a competition to crack the cryptic writings after they were discovered in a hidden cove a few years ago.

They feature 20 lines of capitalised and upside down letters, as well as Scandinavian-style Ø letters and carvings of a boat and a heart with a cross on it.

Now the text, which is also marked with the dates 1786 and 1787, has been deciphered thanks to the contest.

Entrants from around the world submitted 61 possible translations for the message, The Jerusalem Post reported.

What does the inscription say?

Both identified that the message was dedicated to a man named Serge who died near the cove a few years before the French Revolution.

The two winning teams have split the £1,684 prize money for partially deciphering the code.

One, headed up by Frenchman and English teacher Noël René Toudic, believes Serge was a soldier who died after he was forced to row out to sea on a stormy day.

His interpretation of the text reads: "Serge died when with no skill at rowing, his boat was tipped over by the wind".

The carvings were left at the cove by someone after Serge had died, according to Noël.

A second team, made up of historian Roger Faligot and artist Alain Robet, had a slightly different take.

Their translation reads: "He was the incarnation of courage and joie de vivre [zest for life]. Somewhere on the island he was struck and he is dead." 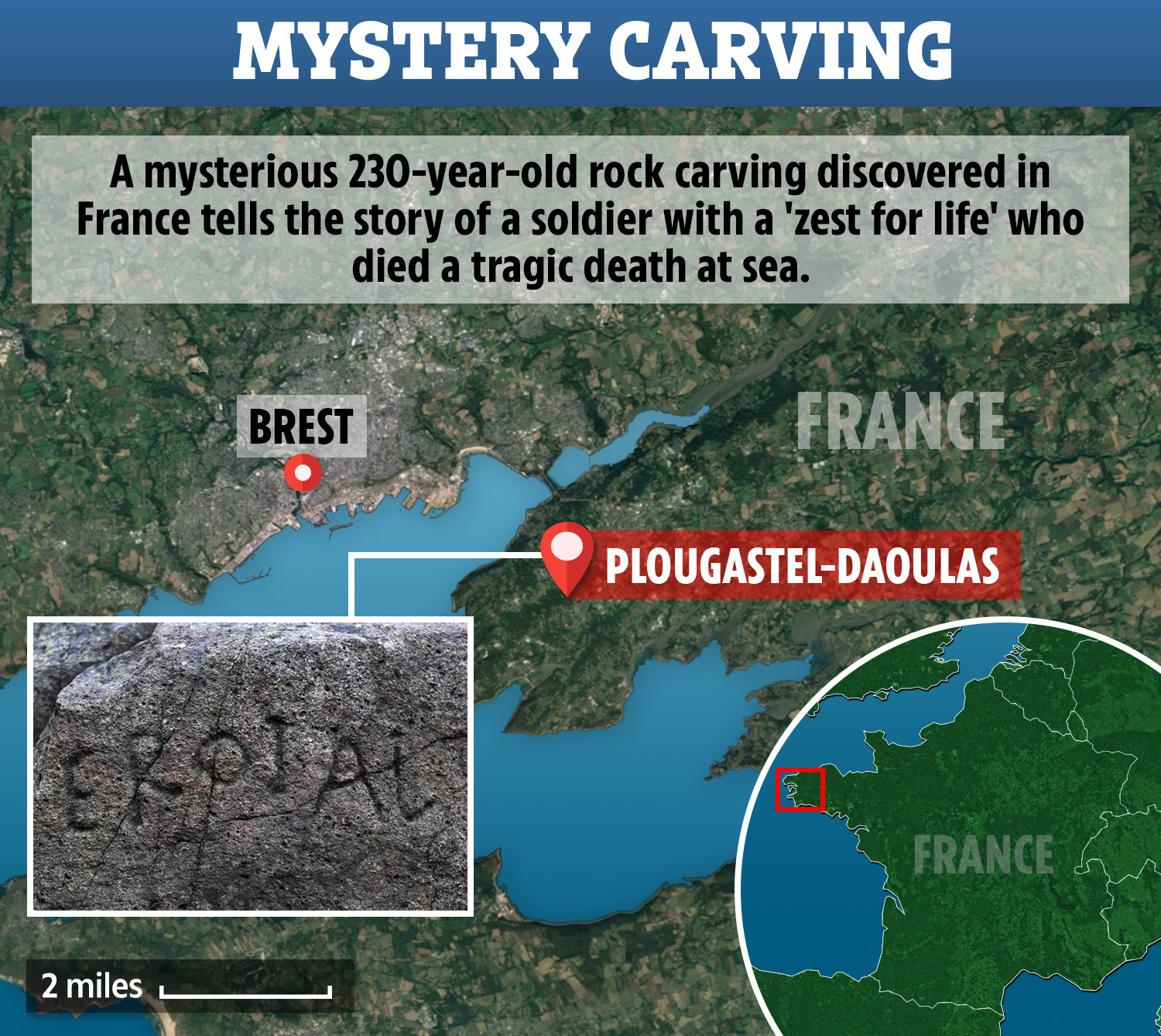 The writings are in a cove that you can only get to at low tide at a remote beach near the village of Plougastel.

They were discovered five years ago and their mix of languages, capitalisation and symbols baffled experts.

What's more, some of the letters were written upside down or reversed, suggesting the writer was only semi-literate.

One phrase has always stuck out to language experts. It resembles 18th-century Breton — the Celtic language spoken in western France since the Middle Ages.

It reads: "Through these words you will see the truth," according to Breton language specialist François-Pol Castel.

Even local experts were perplexed by the inscription, forcing them to open up the competition last year.

"We've asked historians and archaeologists from around here, but no-one has been able to work out the story behind the rock," said Plougastel mayor Dominique Cap in May.

"So we thought maybe out there in the world there are people who've got the kind of expert knowledge that we need.

"Rather than stay in ignorance, we said: let's launch a competition."

In other news, more than 140 new Nazca lines were recently discovered in a Peruvian desert.

A mysterious ancient stone in London is said to have protected the city from destruction for the past 2,000 years.

From a Mummy that "sank the Titanic" to a trumpet that "caused WW2" – here are the world's most "cursed" ancient artefacts.

What do you think of the strange inscription? Let us know in the comments!

Facebook says it is assisting ‘Fortnite’ developer with anti-Apple lawsuit

CNN speaks to family of Canadian detained by Beijing