After two rounds of negotiations Tuesday, House and Senate leaders are near a deal on a big COVID-19 relief bill that would include another round of stimulus checks and an extra $300 per week in unemployment benefits.

The possible deal is a huge breakthrough in Washington, after what has been half a year of stalemate between lawmakers and President Donald Trump’s administration over how to give Americans financial relief during the pandemic.

The outline includes direct payments to Americans, but likely less than the $1,200 checks sent out over the summer, according to two sources familiar with the talks. The compromise also omits the “liability shield,” a ban on personal injury lawsuits related to coronavirus exposure that had been sought by Republicans, and cuts the pot of money to help state and local governments make up projected tax revenue shortfalls caused by the pandemic recession, which Democrats had insisted on until now.

“We made major headway toward hammering out a targeted pandemic relief package that would be able to pass both chambers with bipartisan majorities,” McConnell said on the Senate Floor Wednesday, adding that lawmakers wouldn’t leave Washington until they pass the legislation.

Negotiations over coronavirus aid were reinvigorated early this month when a bipartisan group of lawmakers, led by Sens. Joe Manchin (D-W.V.) and Susan Collins (R-Maine), among others, unveiled a proposal that allocated $908 billion toward the relief effort, but notably did not include another round of the extremely popular $1,200 direct payment checks. 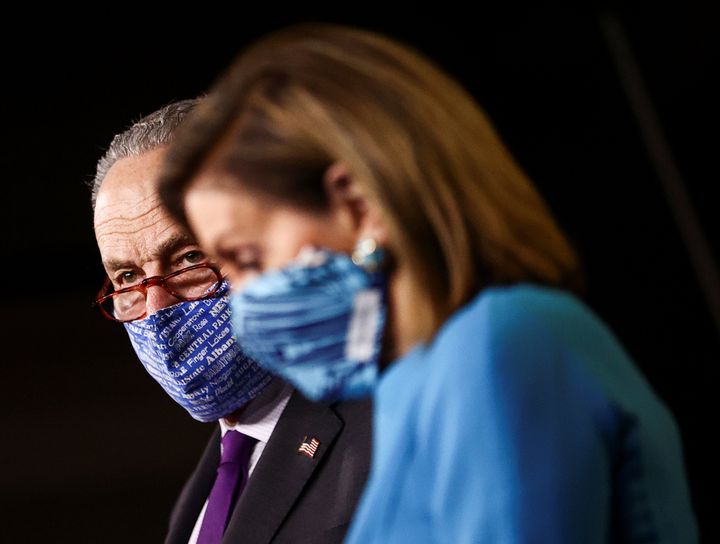 It’s not clear if this newly negotiated deal between congressional leaders includes exactly the same unemployment proposal that the original bipartisan group of lawmakers had hammered out, but a third source with knowledge of the agreement said it would include the extra $300 per week in unemployment benefits that the group had negotiated, but would last only for three months — one month less than the original compromise proposal had it at. That figure is far less than the extra $600 that had been added in the springtime, but still more than the federal government has ever added to benefits before 2020.

The previous deal would have reauthorized federal programs for gig workers and the long-term jobless for four months, and it would also have provided an additional 16 weeks of eligibility for people who use up their state and federal benefits, as 4 million workers already have.

The addition of another round of stimulus checks is a significant step forward after intense lobbying from progressive lawmakers, and one Republican, Sen. Josh Hawley (R-Mo.). Hawley partnered with Sen. Bernie Sanders (I-Vt.) to propose adding direct payments to the original $908 billion compromise proposal.

“You can’t tell me you can’t find $300 billion for working families. You just can’t tell me that isn’t possible,” Hawley told reporters last week. The first round of $1,200 stimulus checks cost the government roughly $280 billion.

The Trump administration did support adding in $600 in stimulus checks last week, but Democrats rejected the offer because of the administration’s failure to include any additional federal unemployment benefits.

The decision to add another round of stimulus checks came with a price, however; congressional leaders have cut a month off the federal unemployment benefits and also done away with nearly $200 billion in funding for state and municipal aid from the original compromise package. Conservative lawmakers have long decried the funding as a “bail out” for blue states.

“It’s irresponsible and reckless that Schumer wants to take money from American taxpayers and use it to save liberal politicians like Governor Cuomo from the consequences of their poor budget choices,” Sen. Rick Scott (R-Fla.) said in a statement over the summer.

State and local governments are already voicing their concerns about Congress’ decision to leave out that aid.

“Survival payments are incredible, and wouldn’t have been possible without progressives, But basic services in cities across the country can’t survive without local aid.” said Bill Neidhardt, New York City Mayor Bill DeBlasio’s spokesperson. ”A stimulus that ignores cities and states is a stimulus that ignores the pain of the working class who depend, more than ever, on the services we provide.”