Budget-conscious buyers trying to get a housing toehold in the nation’s new suburbs are more sensitive than most to interest rate rises and other financial pressures. 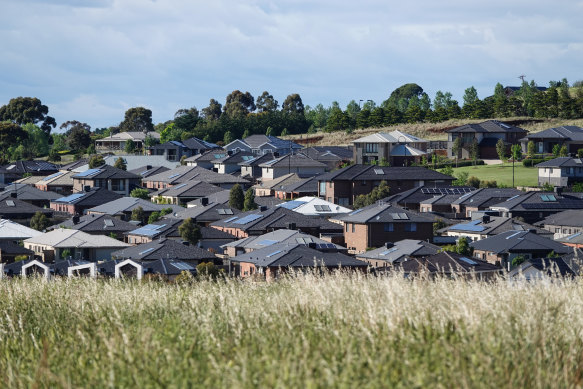 Lot sales in Melbourne and Geelong’s growth corridors are down 41 per cent from the previous quarter.Credit:Paul Rovere

Their reticence to take the plunge has resulted in sales plummeting 67 per cent over the past year causing house-and-land markets on the outskirts of Perth, Melbourne, Sydney, Adelaide, Canberra and south-east Queensland to follow the downward trajectory of established city housing markets.

In 2020 land sales in greenfield estates were at a three-year low as buyers and property developers grappled with the effects of the pandemic. A year later they came roaring back, spurred by historic low interest rates, HomeBuilder handouts and other government economic stimulus measures.

That created a “mad rush” to get into the market, said Colin Keane, whose consultancy Research4 tracks lot sales nationwide.

RPM Group’s latest Greenfield Market Report shows lot sales in Melbourne and Geelong’s growth corridors are down 41 per cent from the previous June quarter and have fallen 66 per cent year-on-year.

But at those levels they are still considerably higher than the previous cyclical low when only 1865 lots were sold in the June quarter of 2019.

By contrast, Research4 data shows Sydney lot sales fell from 800 to 250 a month from June through to September this year, a 70 per cent decline.

Keane said the price of land is staying elevated compared to established housing values which are still falling. The median lot price in greater Sydney (taking in Hunter and Illawarra), which is usually about 45 per cent of Sydney’s median house price, is now about 62 per cent.

“The land market starts to think this is not looking like a good deal,” he said.

RPM’s project marketing director Luke Kelly said the median lot price in Melbourne is also holding up, falling only slightly to $376,000, despite the slump in sales.

But the median size of the blocks being purchased by new home owners has shrunk to a record low of 350 square metres, reflecting the trend towards developers offering smaller lot sizes to make them more affordable.

Kelly said buyers are showing a high degree of cautiousness.

“Days on market has increased to more than 54 days, which is double the previous quarter, while 90 per cent of our clients have visited our sales centres more than once,” he said.

“Buyers are facing a host of challenges, from increasing construction costs through to the rising cost of living, reduced borrowing power and higher mortgage repayments, which is causing them to delay making decisions.”

The challenges facing buyers and developers in housing estates are also hurting Australia’s seventh-largest home builder, Simonds Group. On Monday, it said it was looking for extra capital to help it trade through “extremely challenging” conditions.

A further reduction in demand for new homes over the next six to 12 months meant the company must shore up its financial position. “The board considers it prudent to investigate options to strengthen the company’s balance sheet to withstand a more prolonged adverse trading period,” Simonds said.