The chief executive of hearing implant maker Cochlear has warned children born with hearing difficulties could suffer life-long issues if their surgery is delayed for too long as a result of the elective surgery restrictions around the world.

Cochlear boss Dig Howitt expressed serious concern about what he said was a "huge" human impact, particularly for children born with hearing issues, flowing from the closure of elective surgeries in Australia and in other parts of the world, including in Europe and in the United States. 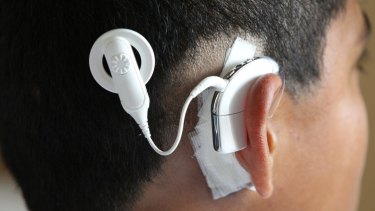 Cochlear is one of Australia's biggest companies and has global operations servicing patients in Europe, the US, China as well as in Australia.

The company, which raised $930 million in emergency funds from its shareholders this week given the restrictions on elective surgery, services 600,000 patients around the world with existing implants with yearly check-ups.

It sold 18,894 cochlear implants worldwide in the six months to December, and although the number of exact patients is unknown, a large number of implants were purchased in bulk by governments for their public health systems. According to the Royal Institute for Deaf and Blind Children, one in every 1000 children are born with hearing difficulties and more than 12,000 children in Australia have a significant hearing impairment. There is also a growing number of older people, both in Australia and globally, who benefit from the implant.

"The evidence is clear on that (the benefits of hearing implants), so we would like to see children getting access to surgery," he said.

In China, where there is a much higher number of children born with hearing issues, pediatric surgery has already resumed, though usually in areas outside of the hardest-hit areas of Hubei province which entered a severe lockdown in January.

"I think the China example is instructive. It’s pleasing to see that for children in China the delays look like it will be only be a few months," Mr Howitt said.

It is expected likely the impact on the healthcare sector could be longer than on other parts of the economy given the appropriate steps by governments to 'flattening the curve' to slow the spread of COVID-19, Mr Howitt said.

"There’s enormous uncertainty and one of the core parts of that uncertainty is how long the restrictions will last.

"If the curve is flattened, what are the implications through the health care system for all of the procedures that get delayed and deferred?" he asked.