Kansas Gov. Laura Kelly (D) is gearing up for a showdown with her state’s Republican leaders over whether she has the right to restrict religious gatherings during the coronavirus pandemic.

Kelly filed a lawsuit against a GOP-controlled legislative council on Thursday after it overturned her recent executive order limiting religious meetings and funerals to 10 people.

The council’s decision to revoke the executive order was “purely political” and unconstitutional, Kelly told The Washington Post.

“The last thing I want right now is a legal battle,” Kelly said at a news conference Thursday afternoon. “But … Kansas lives are on the line, and I took an oath to uphold and defend the Constitution.”

Four clusters of coronavirus cases in Kansas have been linked to “church settings,” Kelly told CNN on Thursday. Most religious communities in Kansas have decided to forgo in-person services, Kelly said, so her executive order was meant for the minority that are still meeting.

“This was not any attack on religion or anything else,” Kelly said. “It was just really put in place to make it clear that we want all Kansans, no matter what your religion, to be safe.” 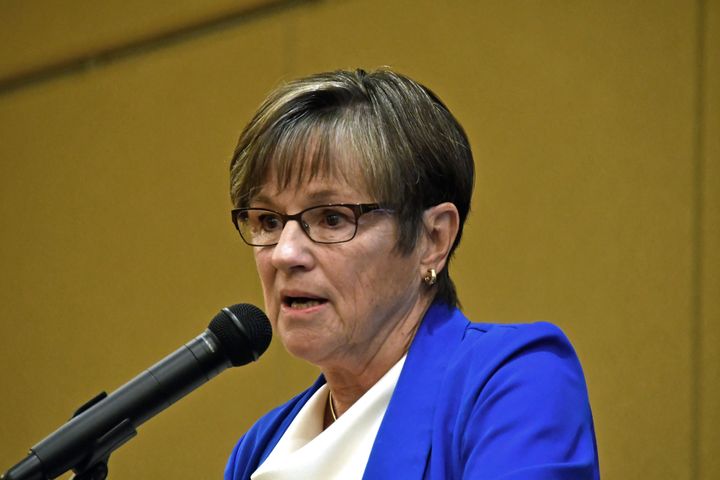 Kelly proclaimed a state of emergency in Kansas on March 12. She temporarily prohibited gatherings of 10 or more people on March 24 but included an exemption for religious gatherings.

On Tuesday, Kelly lifted that religious exemption with another executive order. The move drew the ire of the state’s top Republicans, who claimed it was a violation of Kansans’ religious freedom. State Attorney General Derek Schmidt issued a memo encouraging police officers not to enforce it.

Kansas’ GOP-controlled Legislature hasn’t met since mid-March because of the coronavirus pandemic. Before they left, the Legislature passed a resolution allowing a committee of their top leaders to overturn Kelly’s directives in some circumstances. Five of the seven members of the Legislative Coordinating Council are Republicans.

In a joint statement, Kansas House Republicans said they agreed that Kansans should stay home during Easter and Passover, and that faith leaders should seek alternative ways to worship online. But they believed Kelly’s order made church attendance a crime.

“Kansans should not be arrested for practicing their faith,” the leaders said in a statement obtained by KNSS Radio.

Most people want to limit the spread of COVID-19, but “don’t tell us we can’t practice our religious freedoms,” she said.

Lee Norman, secretary of the state’s health department, encouraged Kansans in a tweet to ignore the council and stay at home.

Kelly’s lawsuit argues that the Legislative Coordinating Council doesn’t have the authority to check her powers in this case. The complaint points to Kansas law that gives governors the power to “promote and secure the safety and protection of the civilian population” during a state of disaster emergency. Her authority in these scenarios can only be checked by the full Legislature ― not by the Legislative Coordinating Council, she says.

The political wrangling in Kansas mirrors some of the conversations happening nationwide about whether authorities’ executive orders limiting religious gatherings are constitutional. States have tackled the issue in a variety of ways ― some have explicitly prohibited religious groups from worshipping in person while others have offered religious exemptions to statewide stay-at-home orders.

Kelly’s lawsuit asks her state’s Supreme Court to make an expedited decision to resolve the dispute before Easter, the most important date on the Christian calendar.

“Religion is really not about the building. It’s about the faith, it’s about how it feels on the inside. The need to congregate is important but not during a pandemic,” Kelly said on CNN.