Are you one of the millions of Americans who’ve lost their job during this unprecedented public health and economic crisis?

Maybe you’re one of the 5.4 million people who no longer has health insurance because you lost employer-provided health care.

Perhaps you’re getting by on expanded unemployment insurance benefits, but stressed because the payments are scheduled to end this month ― and Congress shows little appetite to re-up. Or maybe you’re weighing the health risks of returning to work. Or you’re worried that when the eviction moratorium runs out this month, you might be homeless.

Maybe you’re one of the millions of families struggling to afford food for yourself and for your children?

Well: Have you considered becoming a wind turbine technician?

This is one of several career suggestions from the White House, along with aerospace engineering and operations technician, broadcast and sound engineering technician, computer support specialist, and contact tracer. At a moment of unprecedented economic crisis, with an unemployment rate of 11.1% because of a once-in-a-century pandemic, their latest idea is: Learn a new skill.

On Tuesday, Ivanka Trump ― the 38-year-old daughter of a wealthy man who has never once had to worry about finding the money to pay a bill ― proudly announced an ad campaign called “Find Something New,” which encourages people to get new jobs by learning new skills.

If you visit FindSomethingNew.org, the website created for this effort, you will find a very short list of jobs that are actually growing right now, according to the Labor Department.

One such job is contact tracer, to deal with the worsening spread of the virus that has basically set our economy on fire. Other jobs, like registered nurse, require a serious investment in education ― hard to pull off in a pandemic when schools are shuttered and you might not have the resources to pay tuition. Or when you need work to keep your health insurance and can’t simply go back to school.

Trump cooked up this plan through her role as co-chair of the White House’s American Workforce Policy Advisory Board, created by President Donald Trump in 2018. The board’s other co-chair is Commerce Secretary Wilbur Ross, a multimillionaire who had his own “let them eat cake” moment during the federal shutdown last year, when he expressed confusion over why workers who weren’t getting paid would need to use food pantries.

A bunch of CEOs are on the advisory board, including Tim Cook of Apple and Doug McMillon of Walmart.

Even for this White House, this is a new level of chutzpah. Certainly it’s further evidence that Ivanka Trump profoundly does not understand women’s economic issues ― despite her Lady Boss rhetoric.

It’s also maybe the most extreme example of a certain conservative line of economic thinking, which views all economic crises as problems to be solved at the individual level, rather than through policy. Just pull up those bootstraps, folks!

That’s never really worked out before. These people were arguing about “re-skilling” during the slow recovery from the Great Recession, too, said Heidi Shierholz, director of policy at the progressive Economic Policy Institute and a former chief economist for the U.S. Department of Labor.

In the end, she said, the unemployment rate fell to a historic low without a big “learn to code” revolution. (Some Democrats also go to the well on upskilling, though their rhetoric is usually paired with social programs.)

“Those claims were wrong back then,” Shierholz said. “It’s more blatantly wrong now.”

The argument is even more absurd in this moment because we are not seeing record unemployment due to a skills crisis. We’re in a public health emergency.

Put simply, the reason people don’t have jobs is that businesses shut their doors to help stop the spread of a virus. Then some reopened. Then, the virus got worse and businesses shuttered again. Other businesses are firing people because they’re not selling enough stuff, since it’s a pandemic and Americans are wary of doing a lot of things outside the home.

Other people are out of work ― particularly women ― because their children are home all the time and they need to care for them. They can’t train to work in elevator installation and repair right now (one of the jobs on Ivanka’s list), because they can’t send their kids to day care or summer camp, and soon enough they’ll be home-schooling them.

Millions of others are sick, and cannot work.

What’s most disheartening is that the campaign is coming from the White House, which actually has the power to help unemployed people on a widespread scale.

“This is just terrible economics. It’s absolutely offensive,” Shierholz said. “You have actual power to influence policy that could really make a difference in working people’s lives. To come up with this, which will not, is just a slap in the face.”

“It just shows such a lack of understanding about running a government,” she added.

The advisory board that Ivanka Trump sits on was created in 2018, when unemployment was low and a push to help people learn new skills made some sense. The Find Something New campaign was created by the Ad Council, a nonprofit that works on marketing campaigns for social issues.

Here’s the core problem with trying to solve a huge macroeconomic problem on a person-by-person basis: At an individual level, it makes sense to try and learn a new skill to get work. For example, a reporter who loses their job at a newspaper could find work in, say, digital content production. Others could go back to school and become lawyers or nurses. Someone who lost their job at a bar or restaurant can get work at an Amazon warehouse or grocery store, sure.

But on a national scale, the strategy is flawed because it doesn’t do anything about the actual number of jobs available. If everyone goes out and learns new skills at the urging of Ross and Trump, you’ll simply have a bunch of unemployed workers with new skills.

All the new openings at Instacart and Uber Eats won’t employ all the out-of-work service workers in the U.S.

And though the jobs on the list are growing, there certainly won’t be enough growth to absorb all the displaced workers out there. Take wind turbine technicians. That occupation is expected to see 57% growth, according to data from the U.S. Bureau of Labor Statistics. But that only means an additional 3,800 new jobs between 2018 and 2028. 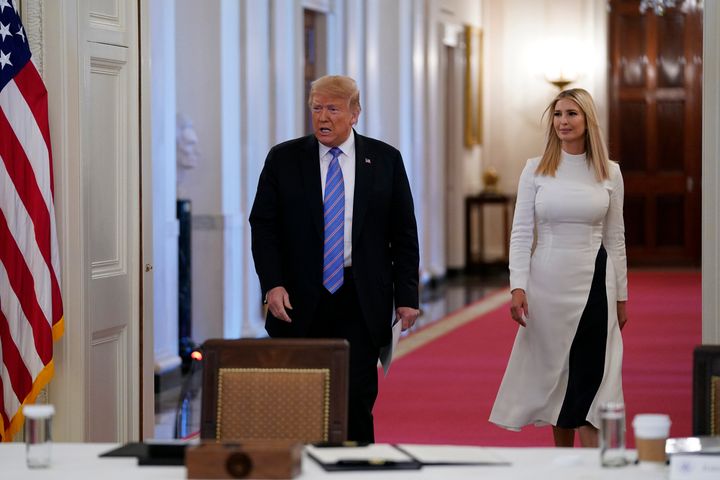 There aren’t enough jobs for the people who need them. Period. Re-skilling is sort of like playing musical chairs: People are racing to grab a job and sit down, and not everyone will get a seat.

What the government should be doing is encouraging demand ― making sure people have money, so they can spend it on stuff. The more stuff they buy, the more businesses will benefit, and thus jobs are created.

Right now, the government can encourage demand by making sure people keep getting unemployment insurance ― and by giving financial help to badly ailing state and local governments, which need the money because there is a huge public health emergency and they need to do things like safely reopen schools.

There is a kernel of reality somewhere in this Find Something New effort, however. If the pandemic goes on much longer, without any kind of real treatment or vaccine, it’s quite possible the U.S. economy will be very different for the long term.

The jobs in this new COVID economy might be different than before. Workers will need to adapt. There simply won’t be as many openings for bartenders, service workers, or retail workers who work in places most at risk for spreading the disease.

Instead, we would need an army of contact tracers, and a huge influx of child care workers and teachers to handle a greatly revamped education system, retooled for a pandemic.

But the way to create those jobs is not going to come from the private sector, Shierholz points out. You could imagine a huge federal push to hire for this kind of work.

Latest Posts
7,000 tonnes onion already imported, 25,000 tonnes likely to arrive before Diwali, says Goyal
These Are the Cities With the Most IHOPs
​4 reasons mortgage rates could drop further this year
Kik Interactive Reaches $5 Mln Settlement With SEC For Running Unregistered ICO
Ford Sees Hands-Free Driving Feature Selling 100,000 First Year
Recent Posts
This website uses cookies to improve your user experience and to provide you with advertisements that are relevant to your interests. By continuing to browse the site you are agreeing to our use of cookies.Ok