Former Attorney General Jeff Sessions and his then-top deputy, Rod Rosenstein, pushed a “zero tolerance” policy that led to immigrant family separations in spite of concerns raised by top federal prosecutors on the border, who were caught off guard by the decision, according to a new Justice Department watchdog report.

Sessions knew at the time of their decision that it would lead to families being separated, but he and his top officials made massive assumptions about how long that process would take, according to the report. Those assumptions were inconsistent with the realities on the ground.

Sessions and Rosenstein refused to adjust their views, even when they were more informed about how the process would play out and knew it would mean ripping young children away from their families.

After some U.S. Attorneys on the border expressed their concerns, they were ordered to move forward with prosecutions.

This had enormous implications. The family separation policy split at least 5,400 immigrant children from their parents, according to American Civil Liberties Union, although advocates believe the number may be higher. Those kids included infants who were still breastfeeding, toddlers and other small children. All of them went through immense trauma, often adding to pain and fear they’d experienced in their native countries, which many were fleeing to seek asylum, and on the journey to the U.S.

In some cases, the government failed to keep records on where the children went. Some of these families were never reunited.

Sessions and Justice Department leadership, the report said, were operating under the belief that separation, prosecution, sentencing and reunification could take place within the span of an afternoon. Justice Department leadership did not consult the U.S. Marshals Service, federal defenders or federal courts before they made the decision. There is no evidence that Rosenstein was aware of some of the early discussion around the policy, but he supported and enforced Sessions’ decision.

Rosenstein, who spent his Justice Department career in the greater Washington, D.C., region, appeared gravely naive about the realities on the ground involved in prosecuting so many low-level cases.

“My thought was maybe we just release [the defendant] back to DHS and they can just hold the kid for a few hours while the parent was in court, and then they would be back together that night,” he said.

Gene Hamilton, the counselor to the attorney general, also believed they would be able to reunited families in a few hours, according to the report.

“It was our understanding that prosecution would happen in an afternoon or in days, [that a child would remain] in DHS custody and then there would be reunification with the children,” Hamilton said. “We didn’t ever imagine DHS would lose track of the kids and their location. Like sending children off to a shelter in New Jersey. That was not our understanding at all.”

After reviewing a draft of the report, Rosenstein had second thoughts. 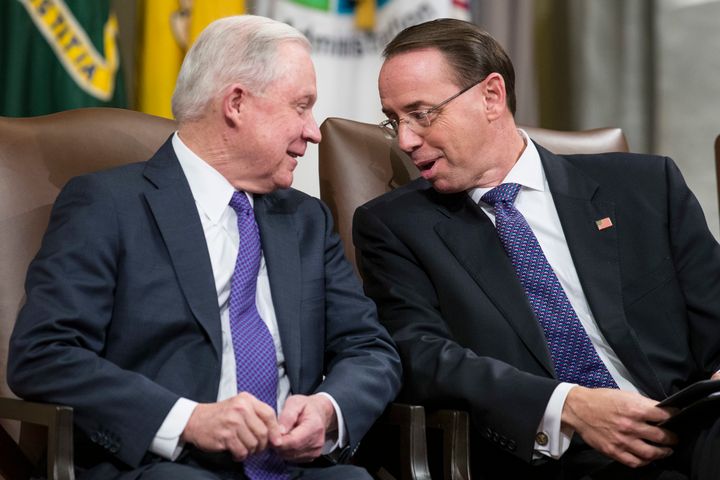 Officials in President Donald Trump’s administration either cheered on the policy as a way to deter unauthorized immigration or looked the other way.

The Justice Department began to split up families in 2017, but announced its “zero tolerance” policy more broadly in April 2018. In May, at the urging of White House senior adviser Stephen Miller, officials decided to move ahead with the policy in a show-of-hands vote, NBC News reported.

DOJ began to dramatically ramp up prosecution for illegal entry among parents who crossed the border with children. Under past administrations, such as that of President Barack Obama, families that crossed the border illegally had not typically been charged with a crime, but rather put in immigration proceedings.

Sessions and other officials claimed it wasn’t about separating families. Instead, they insisted it was no different than splitting parents from their children when they went to jail for another reason.

But the policy wasn’t just about prosecuting crime; it was about taking away kids as a way to prevent parents from coming to the U.S. The administration began considering it a means of deterring families from coming to the border as early as March 2017. The same month, then-Homeland Security Secretary John Kelly confirmed publicly that such a plan was under consideration, also noting the need for deterrence.

Sessions was heavily involved, as the inspector general’s office found. When the five U.S. attorneys along the U.S.-Mexico border raised concerns about children’s welfare, Sessions dismissed them, The New York Times reported in October based on a draft of the report.

“We need to take away children,” Sessions told the prosecutors, according to participants’ notes, the Times reported.

After intense public outrage, Trump signed an executive order in June 2018 to end the practice, and then took credit for doing so — even though his administration started it in the first place.

Neither Sessions nor Rosenstein is still serving in the Trump administration. Sessions was eventually forced out after the 2018 election because Trump didn’t like his handling of the special counsel investigation into Russian interference in the 2016 election. Rosenstein stepped down in May 2019, after the release of the the special counsel’s report.