The US National Transportation Safety Board on Tuesday (local time) will convene its second hearing on a fatal crash involving Tesla's automated driver-assist technology even though the pioneering automaker hasn't filed formal responses to recommendations stemming from the first one more than two years ago. 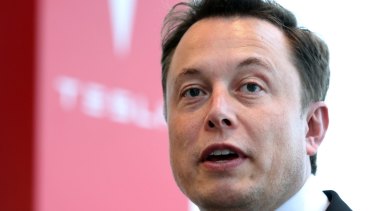 Elon Musk and the National Transportation Safety Board have had a colourful past.Credit:Bloomberg

The NTSB in 2017 recommended that automakers including Tesla make their driver-assist systems more resilient to misuse by inattentive drivers, and limit the operation of those systems to only the driving for which they were designed.

Automakers – including Volkswagen, Nissan and BMW – have told NTSB how their systems ensured driver engagement, which the agency deemed acceptable responses. Tesla has had no formal correspondence with NTSB officials responsible for monitoring how safety recommendations are implemented, NTSB spokesman Chris O'Neil said.

"It's not the norm," O'Neil said. "Most recommendation recipients respond in the prescribed 90-day window."

Tesla didn't respond to a request for comment but has said it updated Autopilot in part to issue more frequent warnings to inattentive drivers.

The role of Tesla's automated driver-assist features known as Autopilot along with other factors including driver distraction and highway infrastructure will be examined at an NTSB meeting on Tuesday examining a March 2018 crash in California, that killed 38-year-old Apple engineer Walter Huang after his Tesla SUV slammed into a highway barrier while using Autopilot. 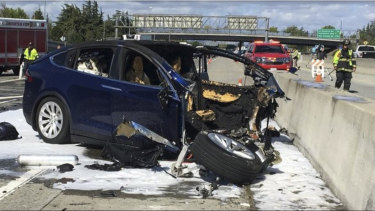 In 2018, 38-year-old Apple employee Walter Huang died after his Tesla crashed into a concrete barrier. Credit:AP

Huang had complained that Autopilot had repeatedly veered his vehicle toward the same spot during earlier trips on that same stretch of highway, according to the agency. Data taken from his Tesla's computer confirmed that the situation had occurred at the same location four days before the fatal crash and once more several weeks earlier, records released by the NTSB show.

The tip of the concrete lane divider struck by Huang's Tesla was supposed to have been protected by a crash attenuator, a device attached to highway infrastructure to absorb impact forces like a car's crumple zone. It was damaged 11 days earlier and hadn't been repaired by the California Department of Transportation before Huang's crash.

Records reviewed by NTSB found Huang was playing a game on his Apple-provided mobile device before the collision, the agency said, citing data transmission records. However, the data couldn't show how engaged he was with the game or whether he was holding the device with both hands at the time of the crash, the NTSB said.

Mayorkas says not all 1.2M illegal immigrants with final removal orders should be deported