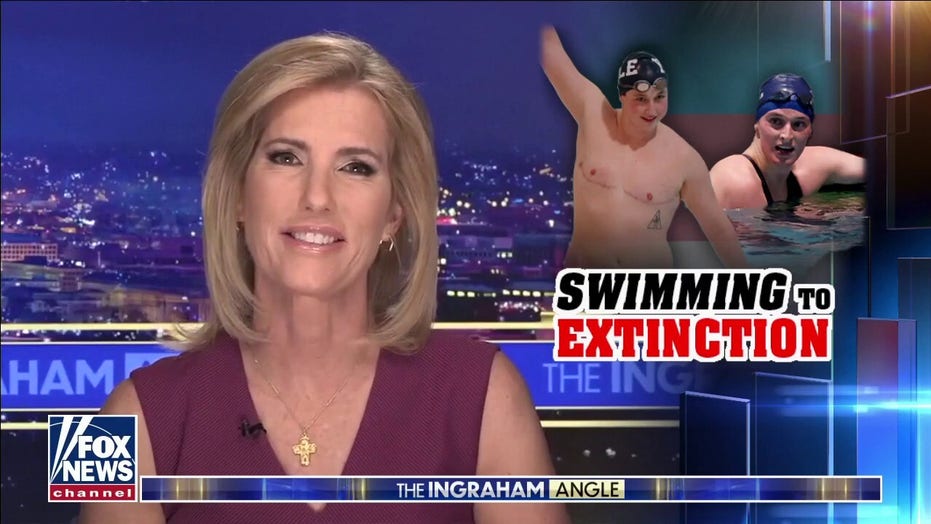 Laura Ingraham said that transgender athletics “deserves the same passion” from “concerned citizens” that they have shown on COVID measures in Friday’s opening monologue of “The Ingraham Angle.”

“As we’ve seen from Virginia though, to California and everywhere in between: When concerned citizens get together, unafraid, and push back with logic and common sense, basic biology – parents and neighbors say ‘this just isn’t what we want for our future, our kids’ futures’ – you could all make a difference,” she said.

“The issue of what’s going on in the pools, track and field, girls’ sports, women’s sports, college athletics – deserves the same passion.”

A transgender male swimmer from Yale, Isaac Henning, established a pool record in the women’s 50-yard freestyle. Henning has not begun hormone therapy.

“So what’s wrong here?,” Ingraham asked. “Are we as a civilization, as Americans, really OK with what we’re witnessing? Is everyone afraid to speak out?”

The Fox News host shared a December report from OutKick in which Thomas’ teammates were described as “upset and crying.” One anonymous teammate said, “They feel so discouraged because no matter how much work they put in it, they’re going to lose.”

“I hate to say this, but she’s right,” Ingraham replied.

“These fellow swimmers know this entire exercise is a charade,” she continued. “So why won’t they stand up and refuse to participate? Well, I’ll tell you why: They’re intimidated because the entirety of society is weighing against them. The coaches are cowards.”

Ingraham added that the media “cheerleads the perversion of sex roles” and “the most powerful liberals in America … encourage [transgender athletics].”

“But what about the rights of the girls, the young women who’ve trained for years, sometimes decades in pursuit of their greatness – pursuit of pool records?” she said. “Too bad, according to the White House and pretty much all of the culture. Just like everything else in the past two years, it’s left to GOP governors to stand for principles.”