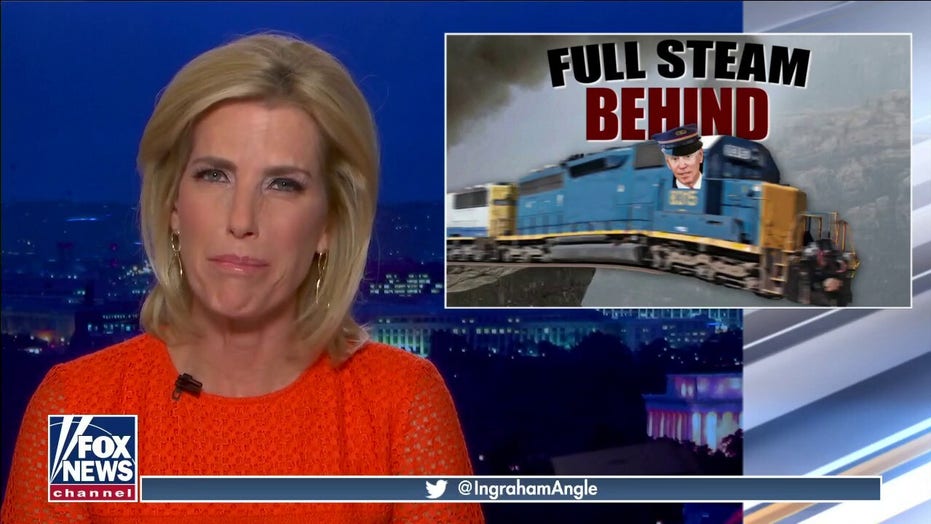 Full Steam Behind: Biden and Pelosi are outmaneuvered by the radicals in their party

Laura Ingraham comments on Biden’s struggles to unite the Democratic Party to fulfill his agenda.

Laura Ingraham said on her Thursday show that House Speaker Nancy Pelosi, despite pleading with her party to come to a consensus on the infrastructure bill, was overpowered by the socialist wing of her party, also known as “The Squad.”

“The grand madam of vote whipping (Nancy Pelosi) was whipped by The Squad,” Ingraham said. Despite the fact that the Democrats have Joe Biden in the White House, a majority in the House and Senate, they remain unable to unify and bring the president’s agenda into fruition. Squad members are generally considered comprised of Reps. Alexandria Ocasio-Cortez, Rashida Tlaib, Cori Bush, Ilhan Omar, and Ayanna Pressley.

The Democrats have downsized the bill’s spending from $3.5 trillion to nearly $2 trillion, but that wasn’t enough for the moderates and it was too moderate for the squadron left.

“The fact is, even at a reduced price of $1.75 trillion, it’s still way more than we can afford. We are literally sticking our grandchildren with these bills – it’s immoral,” Ingraham said.

Biden insisted that the bill would not cost by saying it was “paid for.” At the same time, he urged those who make more than $400,000 a year to “pay” their “fair share” in taxes.

“Don’t think for a second these punitive new taxes will actually pay for the left’s spending plans – they never do. It’s all part of an accounting game to win over gullible, squishy Republicans and moderate Dems,” Ingraham said.

Ingraham added that the priorities in the bill don’t add up to what really matters to the bottom line of the average American.

“American blue-collar workers get shafted once again,” she said. “Biden’s big climate push has nothing to do with helping the American people and everything to do with appeasing the globalists at the U.N. climate summit in Glasgow a couple of days from now.”

She added that while most Americans wouldn’t benefit from Biden’s agenda, China would.

The standard of living that Americans are accustomed to is waning under Biden’s progressive agenda, Ingraham said.

Meanwhile, our economy … continue[s] to stagnate … and Americans will see their savings and income drowned by the rising tide of inflation. Our debt and deficit will explode and we’ll be even worse off than we are now.

That’s why Democrats pinning their re-election hopes on this bill are in for a big surprise. When Americans go to the polls in a year, do they really believe voters will pull the lever for them if their standard of living is lower than a year earlier? I don’t think so.”

Many Candidates Change Positions Over Time. Mike Bloomberg Did It Almost Overnight.