Washington: Donald Trump’s upstart social network is probably months away from being fully operational, potentially limiting his ability to influence the midterm elections, according to people familiar with the fledgling operation.

The pace of development for Truth Social has at times frustrated the former US president, who has discussed but ultimately turned down opportunities to work with other platforms in the fast-growing universe of right-wing social media sites, said three people familiar with the discussions. They, like others in this article, spoke on the condition of anonymity to discuss sensitive matters. Trump is holding out for his own venture, which he believes will be more lucrative and give him more control, advisers say. 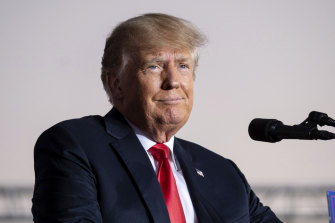 Former US president Donald Trump speaks during a Save America rally in Perry, Georgia on September 25, 2021.Credit:AP

Before he was kicked off mainstream social platforms a year ago, Trump had amassed one of the largest (more than 75 million followers on each network) and most engaged online audiences of any public figure. Some political experts see his ability to motivate people and to garner tens of millions in micro-donations online as critical for the Republican Party’s efforts to regain a majority in Congress this year.

Several Trump advisers said he was aware that his news releases weren’t getting nearly as much attention and that he wanted to get back on social media, though a spokesman for Trump denied he was concerned that his influence has waned.

“The demand for president Trump, his leadership, and his America First solutions continue to grow despite Big Tech’s attack on his freedom of speech,” spokesman Taylor Budowich said. “His influence is not limited to any one verified account. To cancel Trump, Twitter, Facebook and other platforms would have to cancel a majority of their most engaged users. The fact is you can’t cancel MAGA, because MAGA is America.”

Trump was permanently suspended from Twitter following comments he made praising and appearing to encourage the January 6, 2021 assault on the Capitol. Facebook also suspended his Facebook and Instagram accounts indefinitely, but revised that punishment to two years after its Oversight Board said an indeterminant suspension was a violation of the company’s policies. In announcing the two-year suspension, Facebook also said it would extend it if “we determine that there is still a serious risk to public safety”. 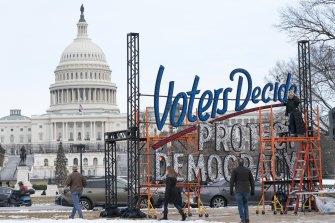 A year after the attack on the US Capitol, people walk past a sign as it is finalised to say, “Voters Decide Protect Democracy last week.Credit:AP

Trump advisers had long speculated he would be kicked off social media platforms when he left the presidency, and Trump himself had floated the idea of creating a social media company even before January 6, the people said. While Trump cared more about his eviction from Twitter, many of his advisers were more concerned about the loss of Facebook because it drove small dollar fundraising, the people said.

But Trump has to-date declined offers to join new right-leaning social media companies that formed in the wake of Twitter’s and Facebook’s crackdowns on far-right groups following violence in Charlottesville, Virginia; the rise of the QAnon extreme movement; election disinformation; and misinformation about coronavirus vaccinations. Those companies seek to capitalise on the highly engaged right-wing audience that arose during the Trump presidency.

Over the northern summer, he turned down a multimillion-dollar offer to become the marquee name associated with Gettr, a social media platform led by former aide Jason Miller. He has also refused offers from Parler, the people said. Gettr has continued to save his handle (or profile name), in the hopes he might join, and the company says it now has 4 million users – creating an uphill climb for his potential new site.

Ultimately, the people familiar with his plans said he believed a Trump-branded company would be a better option.

But the effort so far has been plagued with problems and delays. Dozens of engineers, cyber security specialists and other technical experts are needed to build a social media platform, and though Trump Media has said some hiring has taken place, it will be slow until it completes a planned merger with a publicly traded company.

That merger is under investigation by the Securities and Exchange Commission. Digital World Acquisition, which has raised $US1.2 billion ($1.6 billion) to acquire Trump Media, said last month that the SEC was examining its communications with Trump Media for potential violations of securities rules. One Trump adviser said regulators had caused the lawyers involved with Trump’s new media ventures to be particularly cautious.

Trump Media CEO Devin Nunes, the former California Republican congressman who resigned last week to assume the post, has been calling others seeking advice about how to build the company, but has not conducted a noticeable hiring campaign in Silicon Valley, according to two venture capitalists with ties to conservative politics. 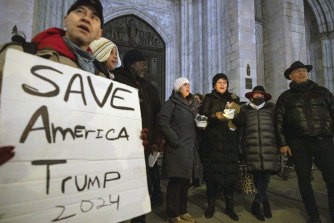 Nunes, who has described himself as a dairy farmer, has no prior experience as a technology executive but is popular among Trump supporters, partially for his work as chair of the House Intelligence Committee and his regular jeremiads against tech firms over censorship.

In October, Trump announced Truth Social as the first project of the newly formed Trump Media and Technology Group. He linked to an early version of the Truth Social website, TruthSocial.com, and said a more formal beta launch would take place in November.

But the early version of the site was quickly taken down after pranksters posted a photo of a defecating pig under the username “donaldjtrump”. Days later, the creators of the open-source social media software the site used, Mastodon, sent Trump Media a letter saying the site had violated the terms under which the software could be used.

The November beta launch appeared not to take place, and a post on Mastodon’s website, updated last month, said knowing if Truth Social was in compliance with Mastodon’s terms “will only be possible once their platform publicly launches”.

A pre-order page for Truth Social in Apple’s App Store lists an “expected” launch date of Febuary 21, but people familiar with the effort said it could be months before it was fully operational. Trump Media did not respond to emails and phone calls seeking comment.

Trump Media’s regulatory filings provide little hard information about how it plans to make money or who is working for it. One slide presentation indicated the company expects to generate billions of dollars in revenue by competing in a number of different industries – social media, streaming, podcasting – but provided no details about how it will generate sales. The presentation included the first names and last initials of 30 possible staffers, who the document implied had been hired from well-known Silicon Valley companies. But there was no further way to identify them.

Trump Media also announced a technology and cloud services partnership with the video-hosting start-up Rumble in December. Rumble, which aims to be a right-wing alternative to YouTube, has received funding from Republican Senate candidate and venture capitalist J.D. Vance, venture capitalist Peter Thiel and Colt Ventures, which describes itself as the family office of Darren Blanton, a Dallas-based investor and prominent Trump supporter.

In announcing the partnership, Trump Media said it had “already launched Truth Social on the Rumble Cloud for invited guests only, and the initial Beta launch has been excellent,” according to the news release.

Rumble, headquartered in Toronto and with new offices in Sarasota, Florida, also has ties to Nunes. The company’s general counsel, Michael Ellis, who was hired in December, is a longtime Republican Party operative, served as an associate general counsel in the Trump White House and was Republican counsel to the House Intelligence Committee when Nunes was chairman.

In December, Rumble also announced that it would merge with a special purpose acquisition company, or SPAC, created by the financial firm Cantor Fitzgerald. In a news release, Cantor Fitzgerald said the transaction was expected to provide $US400 million to Rumble and described the “exciting” start-up as a “neutral video platform”.

“Rumble is designed to be the rails and independent infrastructure that is immune to cancel culture,” the company’s CEO, Chris Pavlovski, said of the SPAC announcement in a news release.

Even with its likely launch date still months away, the prospect of a Trump Media launch has sent chills through the expanding space of right-wing-oriented sites. Any site with Trump on it has an instant edge over sites with a similar mission. And it is unclear how big the potential audience is for any one of them.

The sites are already scrambling to raise capital. Parler announced it raised $US20 million last week, according to a filing with securities regulators. The SPAC deals represent a new fundraising vehicle for the start-ups as they seek to gain advantage against competitors.

The manner with which Trump has sought to fund his site, through a SPAC, also suggests that the social network won’t be ready soon. Typically, it takes five to six months from the time the merger candidate is announced to the time the deal closes, said Michael Ohlrogge, an assistant law professor at New York University who has researched SPAC transactions. Trump Media won’t have access to any of the funds Digital World has raised until the merger closes. It’s unclear whether the company has raised capital on its own.

Based on terms in Digital World’s agreement with investors, the merger must be completed by September 2022, unless shareholders approve an extension. The midterm elections will take place on November 8.

Meanwhile, Trump continues to publicly say he doesn’t miss Twitter. Some of his advisers have said it is a blessing in disguise – because many Americans said he tweeted too frequently and was too brash on the site, turning off potential voters. They also say the censorship of his accounts and the accounts of others ultimately accrues in his favour because it has angered his base of supporters.

Trump has told advisers that he would never rejoin Twitter, but he was livid when he was booted off Facebook. But several advisers say he still wants to know what others are saying on social media and is antsy to begin posting again himself.

Get a note directly from our foreign correspondents on what’s making headlines around the world. Sign up for the weekly What in the World newsletter here.

Amazing 'Pixar' filter goes viral – get it on Instagram, Snapchat and more