The recommendations made by the parliamentary committee looking into Rio Tinto’s destruction of 46,000-year-old sacred sites could stoke further rises in the iron ore price.

It would be an ironic twist.

Sure Rio will need to pay an unspecified amount in restitution, sustain a poor governance reputation and be marked down on the balance between social licence and avarice – but there is potential profit upside.

In the short term, the recommendation of a moratorium on the development of new mines in culturally sensitive areas could be viewed as putting a brake on new iron ore supply hitting the market. 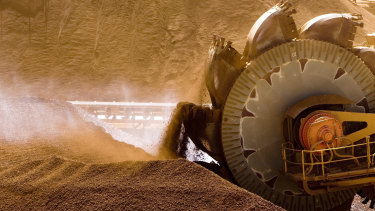 And even a small increase in the price of iron ore is big and bankable for all the major iron ore producers including Rio.

UK bank Barclays provided a note to clients that captured the potential for unintended consequences flowing from the parliamentary committee’s recommendations.

"While we do not know the number of existing Section 18 approvals that sit within Rio’s mine plans for the next two-three years which are at risk of losing consent of traditional owners, we believe it is highly likely that Rio’s production will be impacted over the coming years."

However Barclays also noted that Rio could be a net beneficiary due to the positive price effect outweighing production declines.

Even if the many new iron ore projects that are due to come on stream over the next five years are ultimately given the green light, the recommendations in the interim report have introduced some uncertainty around timing.

Any delays – even if only for a year – could upset the supply-demand dynamic for iron ore. China’s economy is ramping up and steel production is anticipated to have increased 5.5 per cent in 2020 and economists are not expecting this to slow down in the short to medium term.

China is thirsty for iron ore now and the big producers predict this to continue for at least a few years. And most of the Australian projects now in the wings will be replacing existing supply rather than adding to it.

From a shareholder perspective it's fair to say that Rio remains on probation.

What the committee report made clear is that mining companies operating on traditional owner lands will need to reassess projects and ensure that approvals are re-ticked or just wait until the legislation that protects indigenous owners is fit for purpose.

The recommendation contained in the interim report appl iesto developments that have already received what are referred to as section 18 approvals under the current legislation. While some of these are years away from starting, others are shovel ready.

During the many months of the parliamentary inquiry it became clear that there would be a tightening of laws and regulation around mining company approvals to mine development in the Pilbara region.

That outcome was already baked into the outlook for the timing of new projects. But the prospect of an immediate moratorium and even the chance that some may need to be shelved, interrupted or curtailed creates uncertainty about additional supply being brought on over the next couple of years.

And while this recommendation that companies with existing section 18 approvals hold off proceeding until the legislation is overhauled or consent is received from relevant traditional owners, it would be brave – or even foolhardy to ignore it.

The government will have a desire to fast track the Aboriginal Heritage Act – whose shortcomings were found to be a contributor to the Juukan Gorge disaster.

A failure by companies (particularly Rio Tinto) to respond to the recommendations will likely see the shareholders that held Rio’s senior management and board accountable for the Juukan disaster re-enter the fray.

From a shareholder perspective it's fair to say that Rio remains on probation.

HESTA's statement following the release of the interim report provided a thinly veiled warning to Rio and others.

“Mining companies failing to negotiate fairly and in good faith with traditional owners represents a clear systemic risk to investors. Only an industry-wide independent review will provide certainty to investors that this risk is properly managed.”

The Australian Council of Superannuation Investors is clearly putting the industry on notice. “The interim report also continues to raise questions around the cultural and operational failures at Rio Tinto and across the industry more broadly. This includes Rio Tinto prioritising commercial gain over the engagement with First Nations people critical to their social license to operate. It is important that Rio Tinto and other affected companies respond to the recommendations of this important report,” said its chief executive Louise Davidson.

Thus it remains to be seen whether shareholders have finished punishing Rio. That won’t be known until the company faces shareholders at its annual meeting next April.