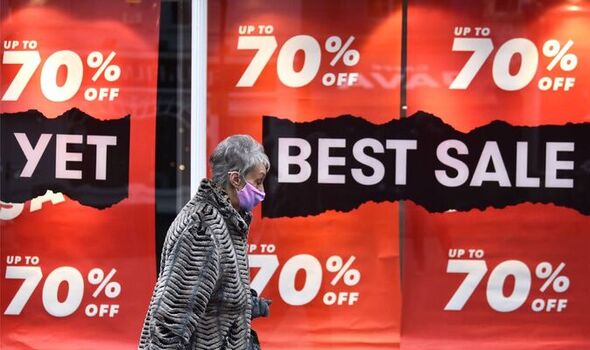 The biggest factor informing their decision-making process is quality or reliability (61 percent).

This was ahead of cost (58 percent) – suggesting consumers are thinking about saving money in the long term, rather than making an initial saving.

Despite this, the study by Trustpilot found almost half (46 percent) “have no choice” but to go for lower cost items – as they’re unable to pay more.

Carolyn Jameson, chief trust officer at the global review platform, said: “Rather than panic in the wake of the cost-of-living crisis, the study suggests consumers are taking a calm and methodical approach to spending.

“There’s no suggestion shoppers are averse to spending money – but, as consumers find their purse strings increasingly stretched, they clearly want to be able to trust that what they buy is going to fit the bill and last.”

Not only are consumers taking longer to decide whether or not to purchase goods compared to a year ago, they’re also consulting more reviews.

Over the past 12 months, those polled have looked at 16 percent more reviews than they had done previously – specifically when spending £50 or more on products.

Nearly two-thirds (62 percent) even went as far as to say they depend on reviews when making “substantial” spends.

Shopping is now about getting value for money, rather than splashing cash around

“Being able to share and see the feedback of other customers online really helps shoppers to decipher not just whether a business will provide a good service, but whether its products are genuine value for money.

“This can not just save time and stress, but potentially money too.”

Despite the apparent change in approach to shopping by consumers in the wake of the cost-of-living crisis, the study found retailers could also do more to help them.

Three-quarters of those polled (74 percent) said they have not experienced any businesses going above and beyond – whether that’s discounts or free upgrades.

These practices include lack of price transparency, and shrinkflation – items shrinking in size, quantity, or reducing quality, while their prices remain the same or even increase.

Another factor was VAT cuts not being passed on to consumers.

It also emerged 69 percent consider themselves to be “savvy shoppers” – good at finding deals and reliable products.

And this is an area 30 percent think they’ve got better at in the past 12 months – with 65 percent of those who feel this way claiming this is out of necessity due to the cost-of-living crisis.

Similarly, the study, carried out through OnePoll, found more than half (55 percent) currently feel more pressure than usual to make sure purchases are worthwhile.

Jasmine Birtles, finance expert and journalist, has partnered with Trustpilot for the research.

She said: “The findings suggest consumers are thinking much more about their spending now, which makes sense because you have less money to play with.

“You’re going to think more about how you spend it and, where possible, you will go for goods that you know are going to last.

“Shopping is now about getting value for money, rather than splashing cash around.

“We have already been hearing about retail spending going down because of the cost-of-living crisis, but these findings show that not only are people spending less, but they are also looking for reassurance from other shoppers before they spend.

“Companies need to realise that getting and keeping good reviews will be essential to the health of their businesses going forward, so they will need to make sure that their goods are as advertised and that they give the best service possible.”

The study also asked shoppers which of the top four retail categories on Trustpilot – fashion, health and beauty, homeware, and electronics – they are cutting back spending on most.

It found almost four in ten have cut back their spending on fashion, while just one in four (25 percent) are spending less on electronics.

NYC-Area States Ban Crowds ‘Amid a Lack of Federal Direction’