Home to United Airlines, its walls are filled with shops and eateries that puts other area airports to shame, with the only possible exception of the newly-constructed Terminal B at LaGuardia Airport. Complete with self-serve checkout stations that let users pay with United MileagePlus points and food-ordering tablets at nearly every table at nearly every gate, it's also arguably the most technologically advanced, as well.

Among the newest additions to the terminal's lineup are two Cibo Express Gourmet Markets. While most flyers will recognize the name, they might not recognize these new stores as unlike other Cibo Express locations, these utilize Amazon's "Just Walk Out" technology.

The same technology used in Amazon Go stores, OTG began rolling out Just Walk Out to its stores in March, just as the pandemic hit. And eight months later, it's proving to be the perfect solution for the airport retail experience as flyers return to the skies.

With a quick scan of a credit card, customers can duck in, grab what they need, and get out within minutes, if not seconds. No more cashiers, no more lines, and no more waiting.

I toured one of the newest stores during a visit to Newark, take a look inside. 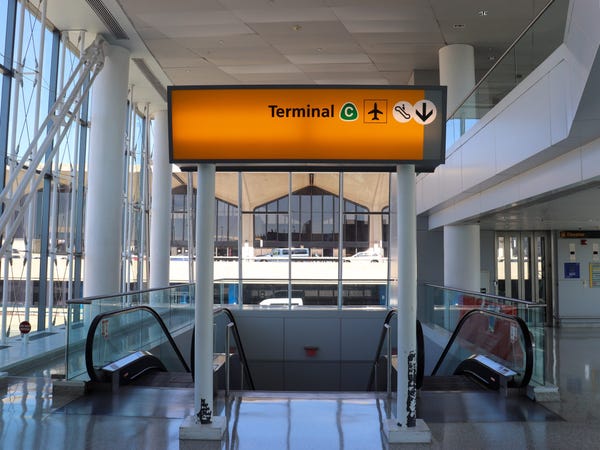 Plans for the stores were actually announced on March 11, when the World Health Organization declared COVID-19 a pandemic and hours before the air travel industry was disrupted by the US closing its borders with Europe. 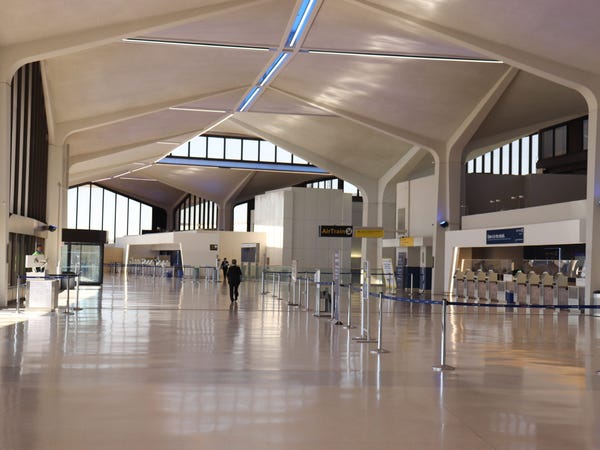 But despite a reduction in passengers, both stores were opened, and at the perfect time since the pandemic created a need for more touchless retail options. 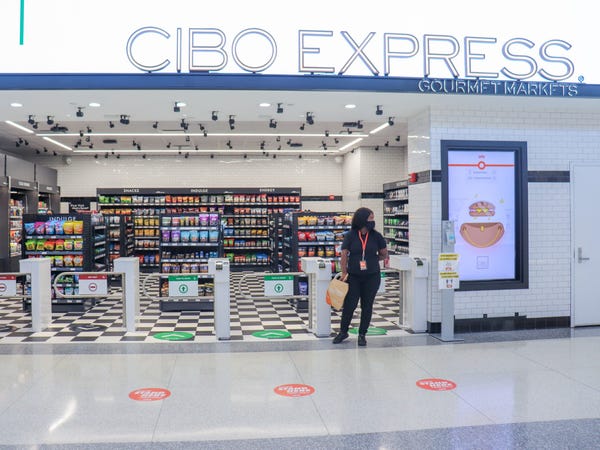 Some called OTG CEO Rick Blatstein a psychic for predicting the need for this tech in his stores but he told Business Insider that this was in the works long before the public was aware of COVID-19. 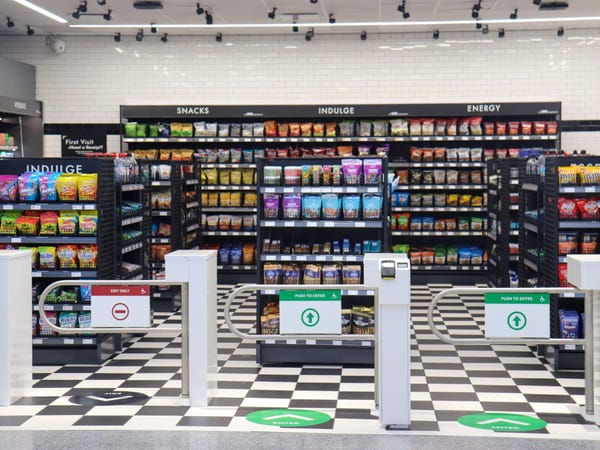 Before we could enter, we had to establish some form of payment since there'd be no cashiers to take cash. These turnstiles are the barriers through which all customers must pass to enter the store. 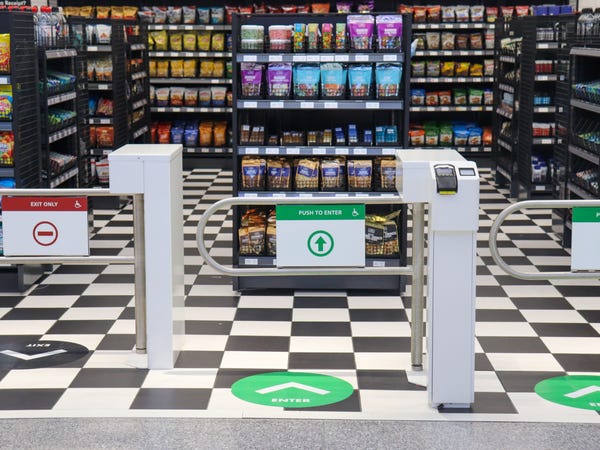 A credit card is required to enter, even if just browsing, and the card readers are contactless-capable for an expedited entry with just the tap of a card. 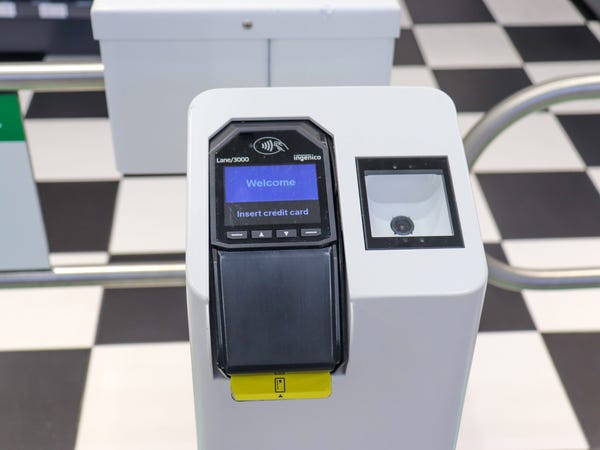 Blatstein acknowledged in an interview with Business Insider that not every traveler has a credit card and his firm is creating ways to welcome those customers, as well. But for now, the solution is as simple as directing them to other OTG stores that accept cash, of which there are many in the terminal. 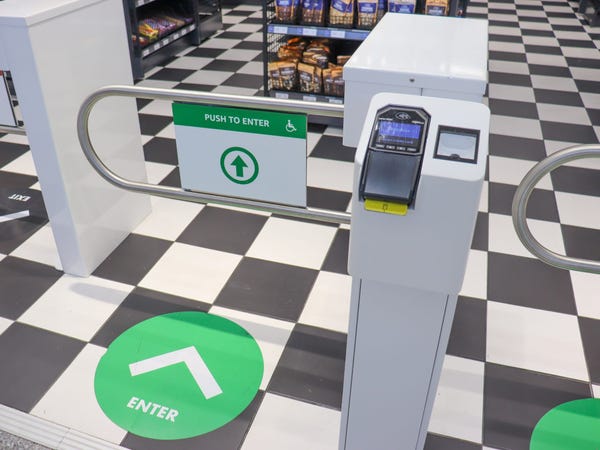 Once inside, an array of cameras and sensors will track the items with which a customer leaves and charge their credit card. No cashier required. 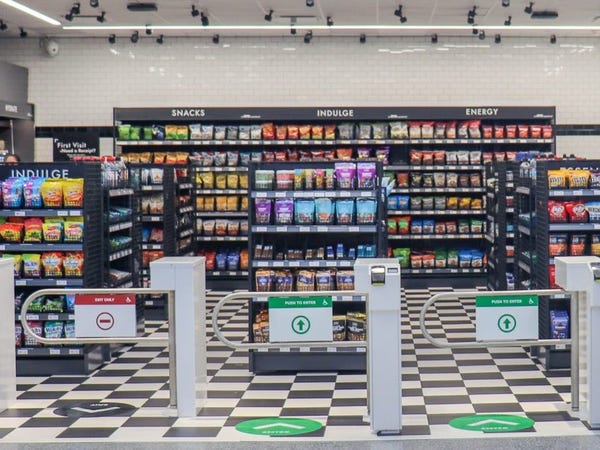 Face masks are also required in the store, as well as everywhere in the airport per Port Authority rules. 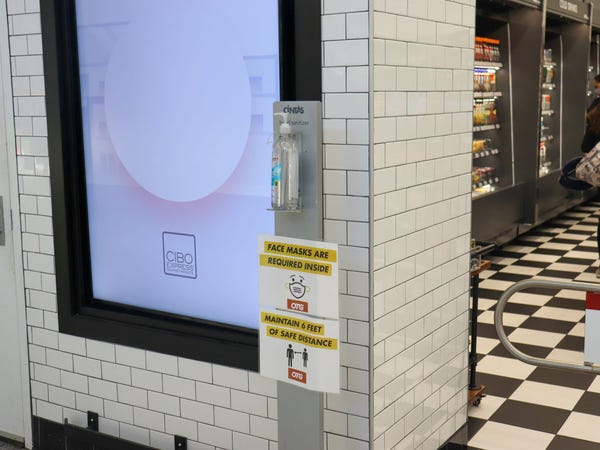 Snacks, food, and beverages are the main focus of the store, as the name "Cibo," which is Italian for "food," would suggest. 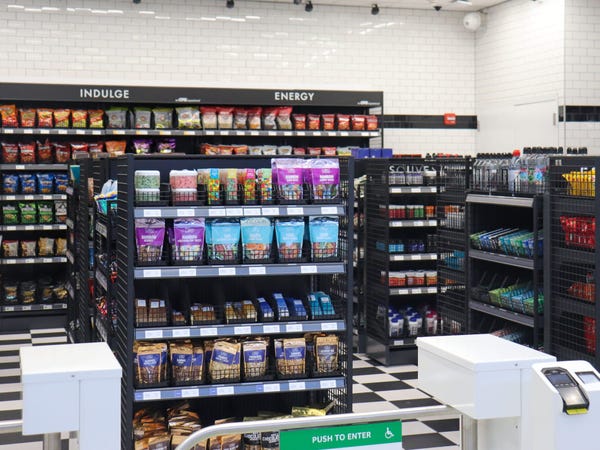 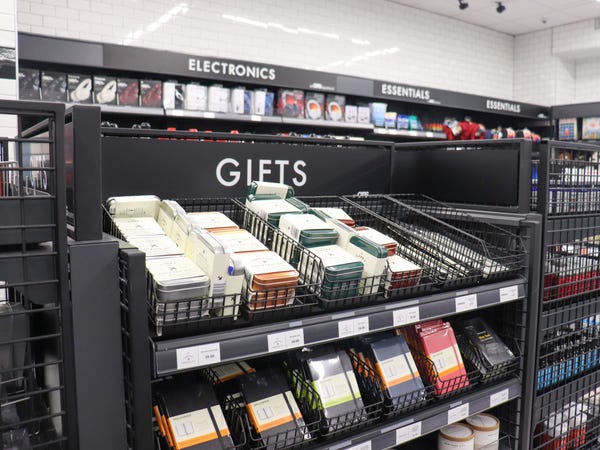 Essentials such as deodorant and face cream… 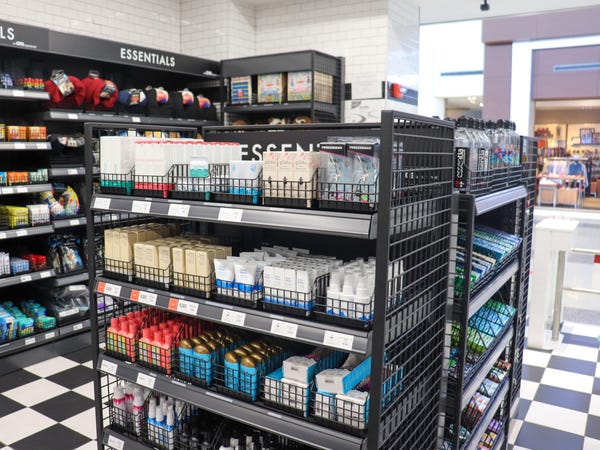 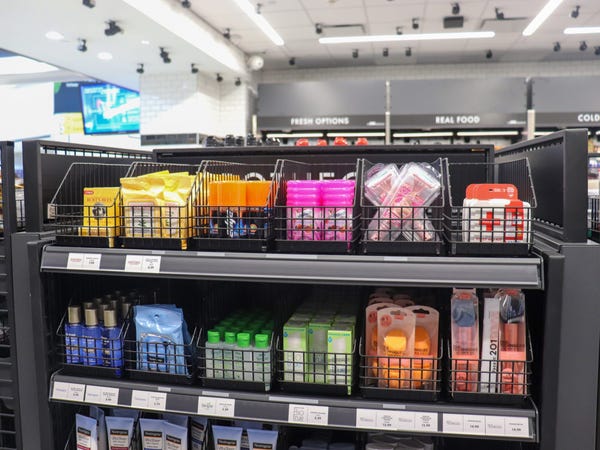 Electronics such as headphones and phone chargers… 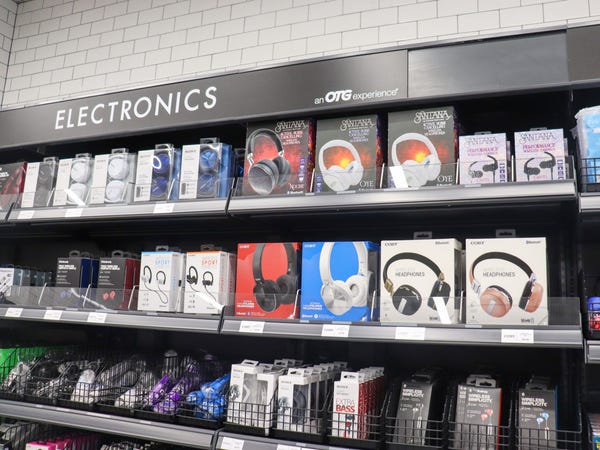 And of course, neck pillows. 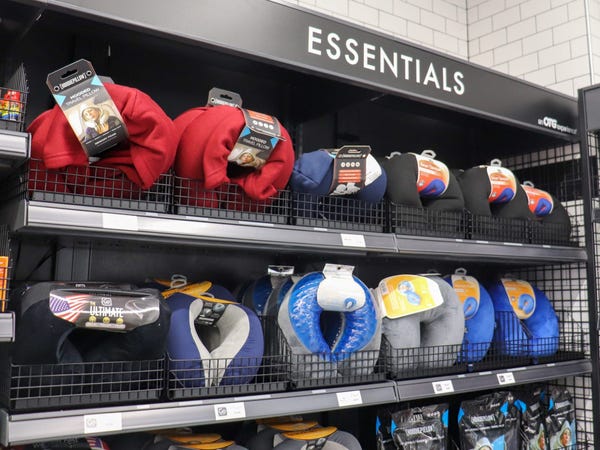 But food, snacks, and drinks are the main focus, after all. 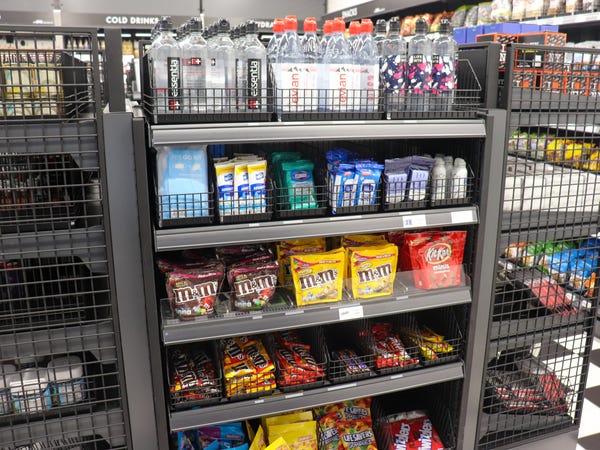 There's no shortage of classic snacks that flyers enjoy like chips, peanuts, pretzels, and more. 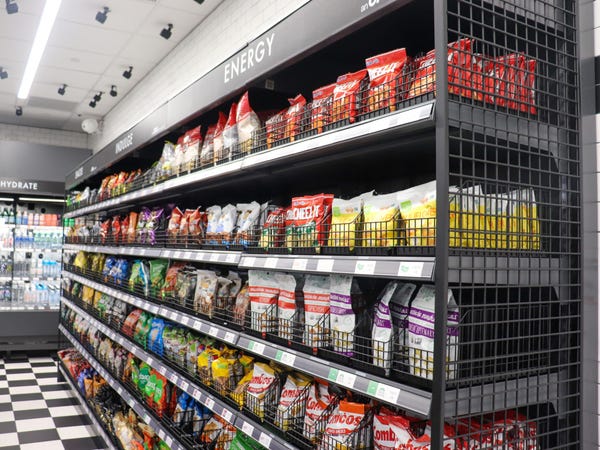 And there are also fan favorites like gummy bears and Walkers Shortbread. 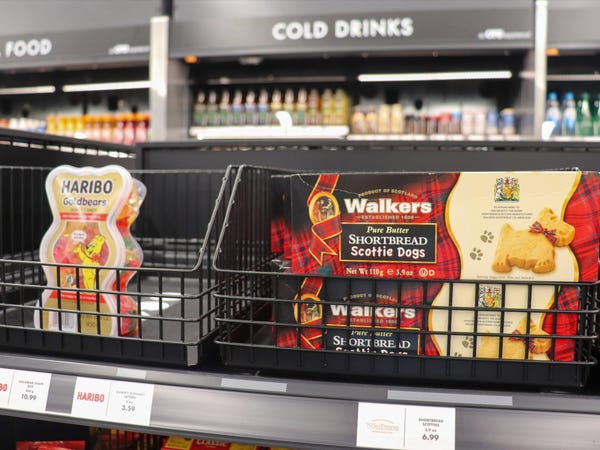 Fresh food is also sold here. It's kept in a refrigerated section that includes salads, sandwiches, wraps, and other pre-made food. 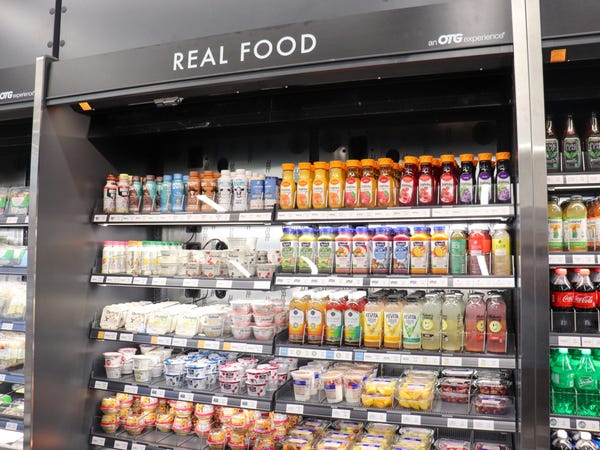 The ease of use the store offers is cutting down dwell times for customers while also driving up sales. 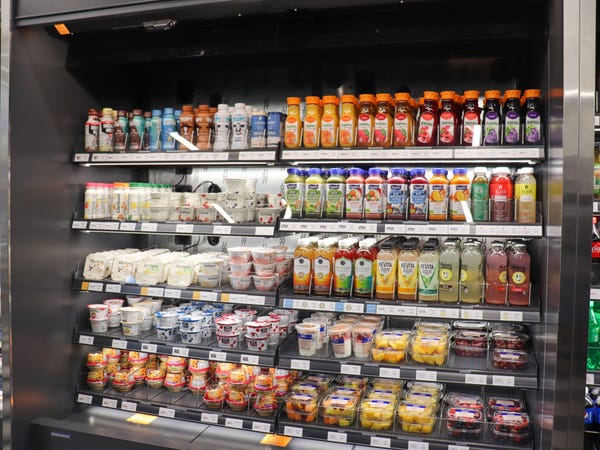 Blatstein told Business Insider that customers also tend to buy more in these stores than they do in other OTG stores. 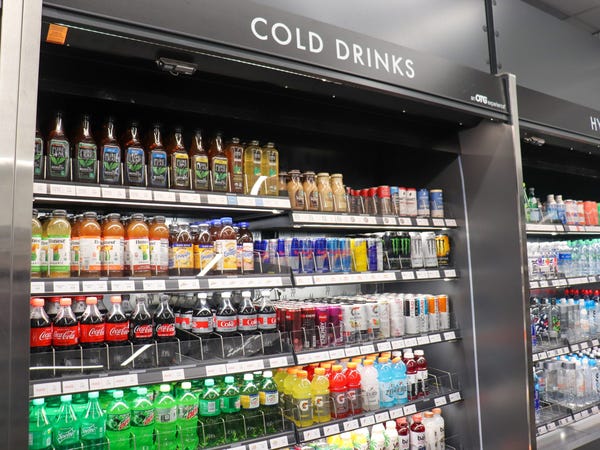 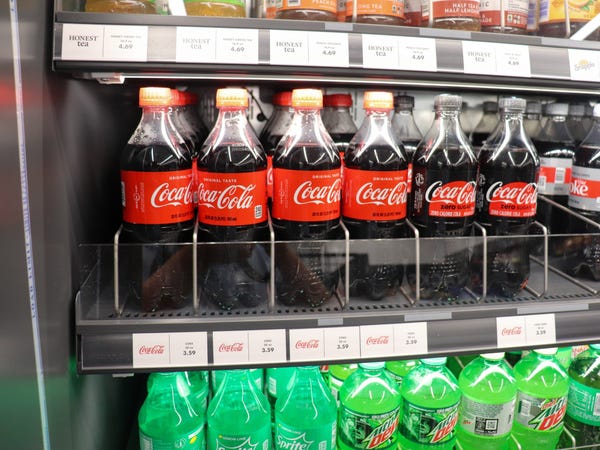 And a 3-ounce bag of Cheez-Its is the same price. A reminder that you are still in an airport and airport pricing applies. 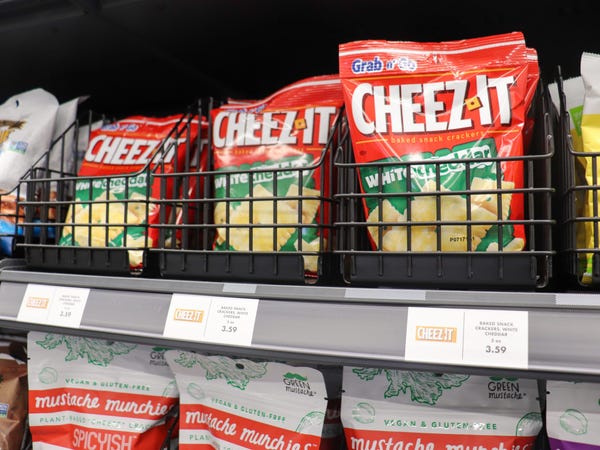 First-time visitors also need to register at one of these tablets so the store knows where to send the receipt. 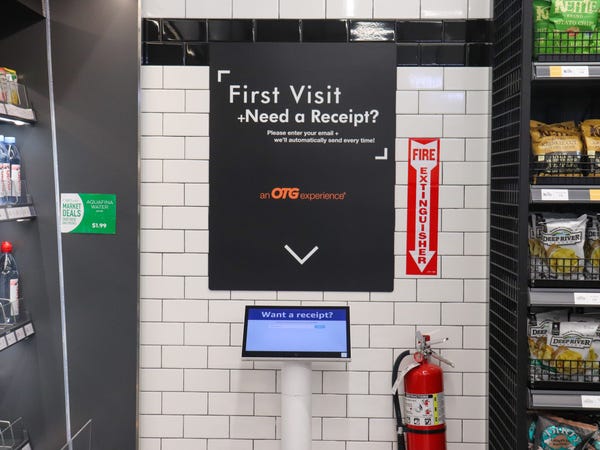 And if a condiment or utensil is needed, it can be found just before the exit. 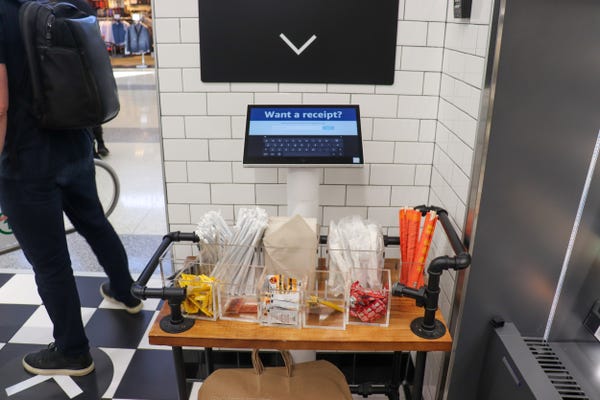 Then, as the technology's name suggests, customers can just walk out, and they'll receive a receipt within 24 hours. 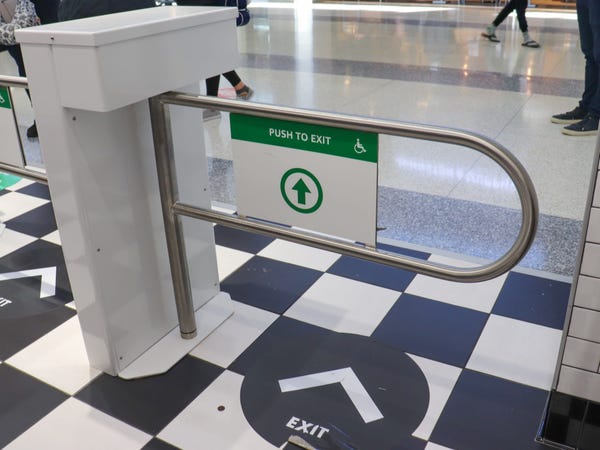 Blatstein believes that these stores are the way of the future, describing them multiple times as "magical," and he firmly expects more retailers to adopt this technology. An early believer in the tech, Blatstein sought it out for his stores after personally visiting Amazon Go stores – where the technology was pioneered.

Elated with how the Just Walk Out technology successfully identified his items, especially after unsuccessful attempts to confuse the system, Blatstein knew this tech could do wonders for the OTG customer experience.

The moral question of whether or not this tech would kill jobs was a moot point for Blatstein who said that the company is focused on increasing the volume of sales, which ultimately means hiring more staff. Terminal C, for example, is an OTG stronghold with iPads at nearly every seat ready to take a customer's order instead of a waiter, which Blatstein pointed to as a success because the company still increased staffing at the airport by 50% despite the new tech.

And the stores aren't entirely automated as two hosts greet passengers as they walk in. Just Walk Out tech is still new so some customers might need a quick explainer, or just a to-go bag, which hosts are ready to provide.

Plans to expand the technology across more OTG stores are in the works, though the implementation has been delayed by the pandemic.  Just across New York Harbor, the new Delta Air Lines terminals at LaGuardia Airport will also see some of these stores once they're completed.

After expensing $5,100 in Dior bags, SoulCycle's CEO was suddenly out. Now, an executive exodus and a culture war threaten to send the company off a cliff.