In February, two white men chased and confronted Ahmaud Arbery, an unarmed Black man, while he was jogging. He was killed during the encounter. In March, police officers crashed into the apartment of Breonna Taylor, a Black woman, and shot her multiple times. And in May, three police officers pinned George Floyd, a Black man, to the ground, with one kneeling on his neck until he could not breathe. Floyd died, and the kneeling officer has since been charged with third-degree murder. The other three officers involved in Floyd’s death have yet to be charged.

These unjust deaths have poured attention and outrage onto America’s well-established legacy of white supremacy and police brutality, launching protests and riots in cities across the country. Yet these demonstrations come at a time of already overwhelming instability. The coronavirus pandemic has claimed over 100,000 lives in the U.S., 23,000 in New York alone, disproportionately impacting communities of color. The global economy has collapsed. And though many of the current protests are peaceful, law enforcement and National Guard forces have used tear gas, rubber bullets and pepper spray, and even cars and horses to break up crowds. As businesses suffer property destruction and all involved face potential injury, it’s obvious that taking a stand rarely guarantees safety.

If you plan to join protests to demand justice, many stand with you. But there are measures you should take to ensure you, your fellow protestors, and your community stay safe. To address those measures, BAZAAR.com has consulted two experts: Saba Moges, a nurse who’s attended protests in Baltimore and Washington, D.C., and Judith Matloff, a professor of conflict reporting at the Columbia’s Graduate School of Journalism and author of How to Drag a Body and Other Safety Tips You Hope to Never Need. Here’s what they want you to know. 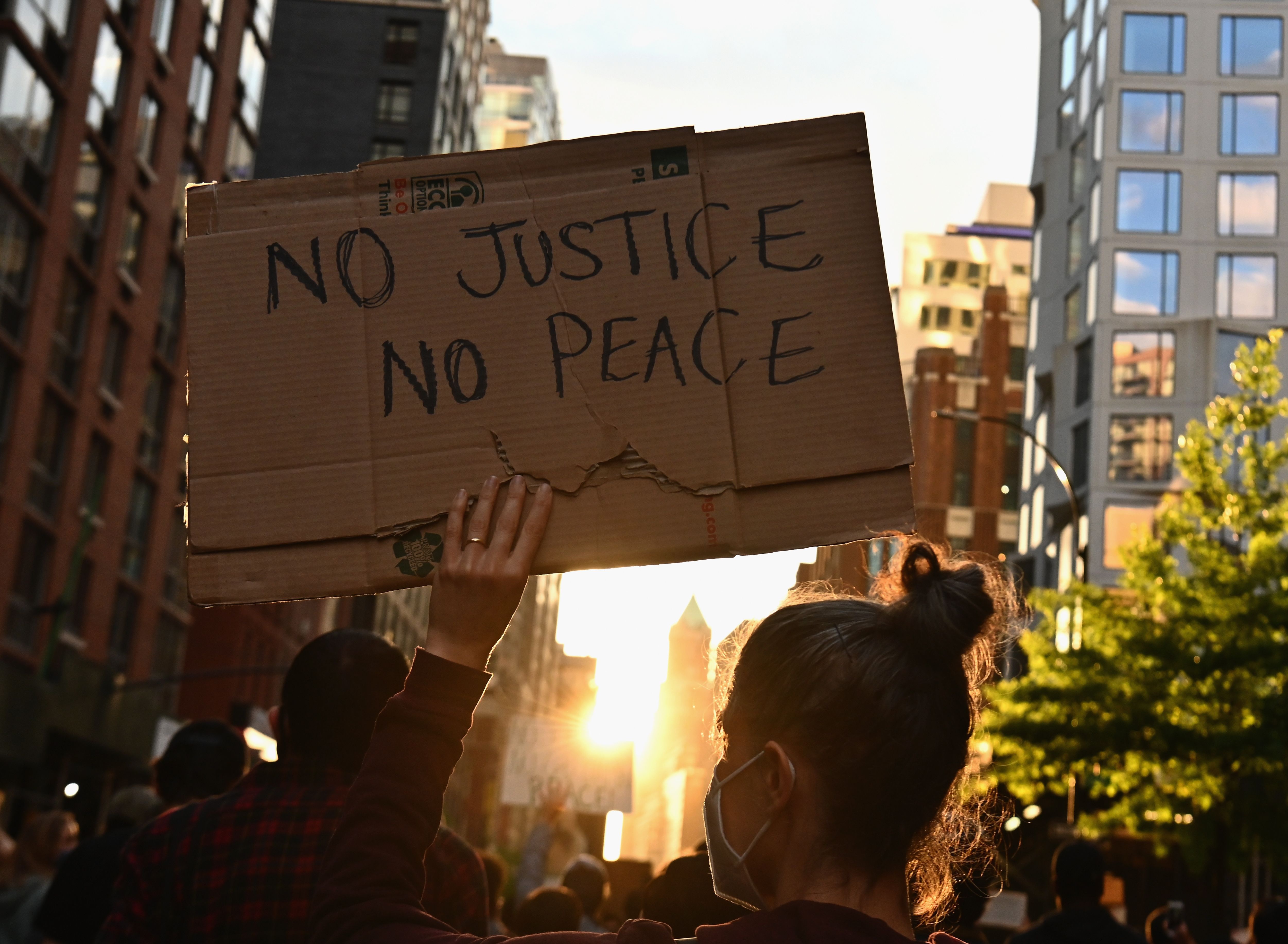 What to Know Before You Go

Before you step into the streets to protest, you should take some time to research, Matloff says. Read what others are posting on social media. Go through resources provided by organizations such as Black Lives Matter. Be ready for the worst. “I think it’s really, really careful to keep in mind that while you have a right to protest, the police look at things differently,” she says. “And I think you have to approach these things with the assumption that there could be some brutality.”

So first, study what tactics your local police use for crowd control. Have there been reports of tear gas usage or pepper bullets? Have any officers taken a knee or met with protestors to speak with them? Getting a better idea of your local force’s past behavior can help you prepare for any reaction. But do know that you are expected to respond to police commands. “If they say move, move, and don’t argue with police,” Matloff advises. Show that you are peaceful, and you’ll lessen your chances of escalating the situation or facing arrest.

Second, research the demonstration you’re attending. Who is organizing the protest? Do they have a permit? “If you don’t have a permit to be there, the police have the right to go in and do whatever they want to do to get rid of you,” Matloff says. If you are attending a protest that is free-roaming without a permit, be aware that police retaliation is a strong possibility.

Third, understand your position within the protest. If you are a white or non-Black person of color, Moges says, “It is time to take the back seat in these situations, unless you are coming to the defense of a Black person between a police officer—because that’s really where allyship is going to be right there.” Amplify Black voices rather than your own.

Finally, recognize the risks of COVID-19. As reported by ABC News, according to data gathered by Johns Hopkins University, the number of U.S. coronavirus cases has increased to a daily average of nearly 22,500 new cases from May 28 through June 1. The increase is likely linked in part to states reopening businesses, but given that the George Floyd protests started on May 26, it is also likely these gatherings are significant sources of coronavirus spread. The virus spreads primarily through exhaled droplets from coughing, sneezing, talking, and shouting; it’s essential that you wear a mask while protesting and try to maintain distance from others.

Before you attend any demonstration whatsoever, develop a plan, Matloff says. Be ready for escalation. Be ready to escape. Make sure you have everything you need with you.

Start by informing people you’re attending a protest. Set up childcare or pet care in the instance you are arrested. Leave your keys with someone you trust. If you plan to park near the protest, make sure your vehicle is in a safe spot with easy access.

Next, decide where you’ll position yourself. Maintain six feet of distance between yourself and others, whenever possible, to avoid spreading COVID-19. If you must stand close to others, stand on the periphery.

“When you’re in one of these situations, your adrenaline starts flowing and you get excited, because emotions are infectious,” Matloff says. “So as tempting as it is to go right into the center of the action, stay on the periphery. You’re still going to be participating or observing, but you’ll be able to maintain some degree of social distancing.”

The other advantage of positioning yourself on the periphery is that you’re less likely to get tear-gassed or pepper-sprayed, she explains. But make sure you aren’t too far from others—there’s safety in numbers.

As Moges points out, social distancing is the goal, but it’s difficult to accomplish in a massive crowd. She says 90 percent of the protesters she’s witnessed in Baltimore and Washington, D.C., have been wearing masks, but some contact will still be likely. Don’t take your mask off to yell louder, she says—it’s not worth the risk.

“There are times when the mob stops moving, and space does open up on the perimeter,” she says. Plan that time to “drink some water, eat a snack during those times. Try and find a little extra spacing where you can safely pull your mask down.”

After assessing your position, develop a buddy system. If possible, travel with one or two trusted friends and ask that they watch your back. Instruct them to take photos if anything happens to one of you. Link arms; Matloff says police are less likely to arrest two people who’ve linked up. But don’t travel with a group larger than three people—it’s easy to lose track of your loved ones and get separated if there’s too many of you.

Lastly, memorize your friends’ emergency contact numbers, or at least have them on hand. Designate a safe house nearby. If violence erupts, you’ll need a place to escape to that isn’t a storefront. Connect with a friend who lives in the area and ask if you can use their apartment should anything go awry. Update them on your status every 20 minutes during the demonstration so they know you are safe. 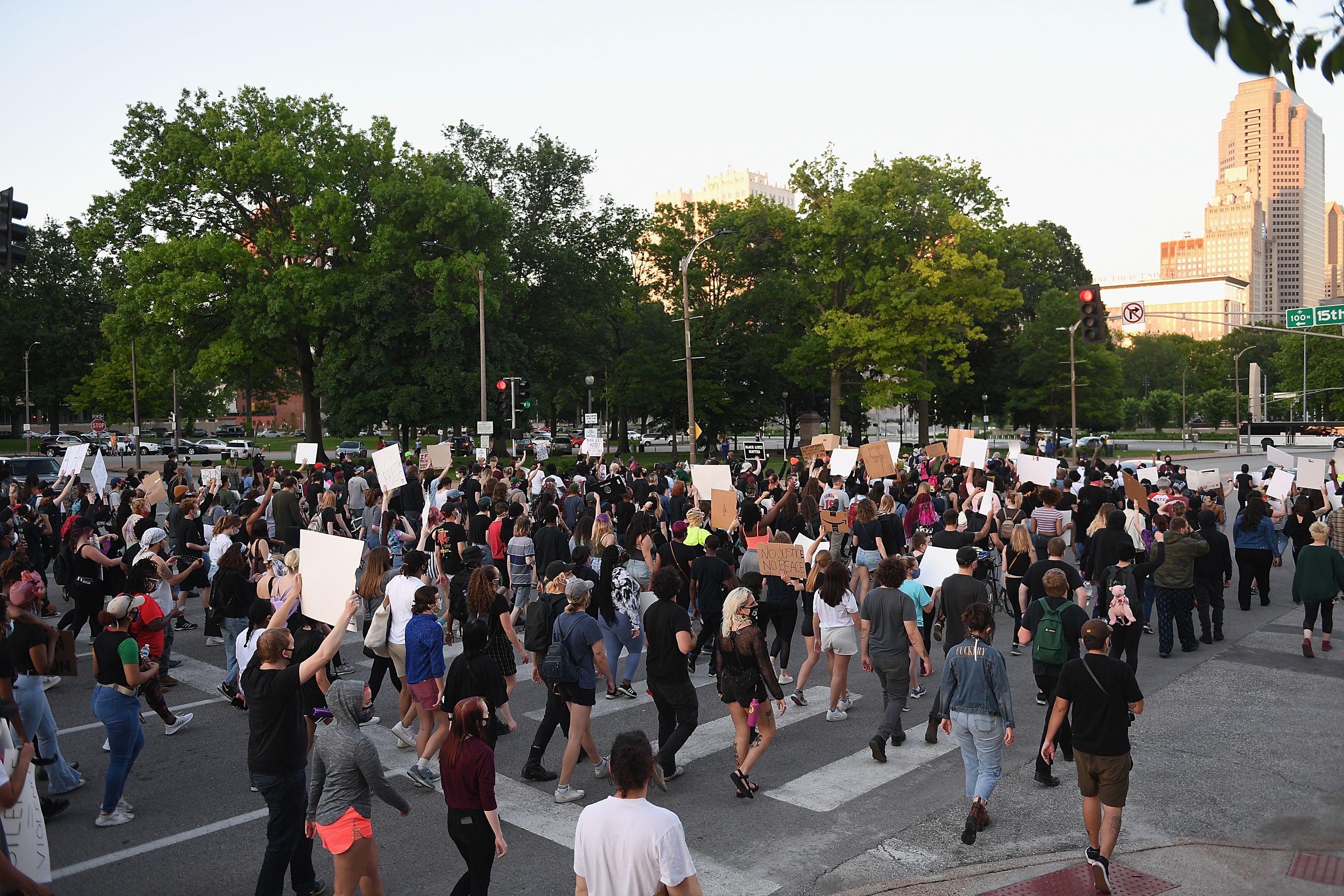 You’ll need to gear up for any outcome, while still taking precautions against the ongoing pandemic. Bring several masks, Matloff instructs. Wear one, but be sure you have extras in case it gets contaminated from tear gas or pepper spray. Wear gloves to protect from both the coronavirus and skin irritants.

The most important thing to do: Protect your essential organs, Matloff says. If possible, don a pair of ballistic goggles—the kind used at firing ranges—as well as a bicycle helmet or construction helmet to protect your head from thrown items. If the weather isn’t too hot, throw on rainproof outerwear, such as a poncho, so you can remove it should you come into contact with contaminants. Wear sturdy, lightweight hiking boots that you can run in. Having a lace-up boot protects your ankles from turning when you need to sprint, and running shoes too easily come untied, Matloff says.

Finally, if you typically wear makeup, skip it. Skin creams, including sunscreen and other makeup products, can trap tear gas particles on your face. Same goes for your contact lenses—take ’em out. Avoid throwing long hair into a ponytail—it can be grabbed, putting you in danger—and remove dangling, loose accessories such as scarves or earrings.

Moges recommends that if you plan to attend multiple protests, have your bag packed at all times and restock it each night. Take essentials with you in a tight cross-body bag, not a backpack. Those can be pulled and grabbed; a cross-body can be kept close to your chest.

Don’t weigh yourself down, but pack the following, if available to you:

Moges also recommends that any health care workers who attend protests wear a badge. This serves two purposes: 1) It informs the police and protesters of your status, and 2) shows those around you that you have first-aid supplies available, should they need them.

What to Do If Violence Erupts

Protests can quickly become tense situations, and if you feel a change in the mood around you, get somewhere safe immediately, Matloff advises. “At that point just get out of Dodge,” she says. “If you’re on the edge of the crowd, you can run really quickly because you’re on the edge and nobody’s blocking your way.”

If you do find yourself in the middle of an altercation, here’s how to address the following: 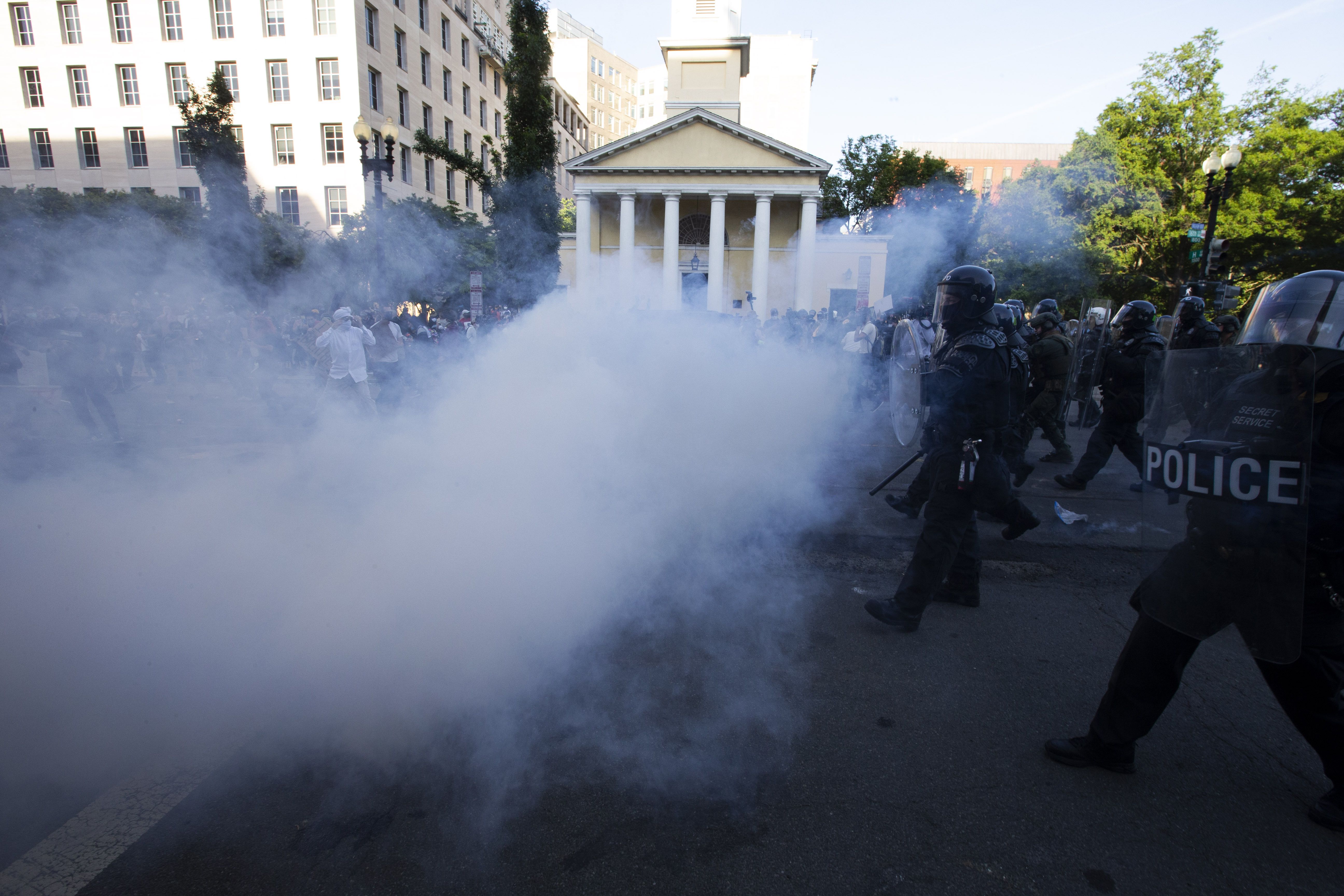 What to Do If You’re Arrested

Know that you have the right to voice your opinion in public. You have the right to be told the reason for your arrest, and you have the right to call a lawyer. But always comply with police orders. Don’t resist; doing so could put you and others in further danger. Keep your hands up and visible, and say you wish to remain silent. Police may pat you down for weapons, but don’t say or sign anything without a lawyer present.

Remember that buddy system? If you’re getting arrested, ask your friends to contact your emergency contacts and lawyers. They can help bail you out and get you safe.

What to Do When You Get Home

Once you get home, stop immediately inside your front door. Dispose of your mask and any other contaminated clothing immediately, Moges says. Take a shower. “This is not a quick two-minute shower,” she says. “Lather up, lather up again, make sure you’re really washing your face, washing around your eyes.”

Wipe down your phone and gear, as well as your water bottle if you plan to reuse it. If you live with other people, consider distancing yourself from them for 14 days to decrease the risk of a possible COVID-19 spread. If you have access to testing for the coronavirus, get it.

After you are safe and clean, find someone to support you. Physical trauma is terrifying enough, but emotional and mental trauma are also compounding in our communities, especially communities of color. Matloff says it is absolutely essential that protesters take time to decompress and talk through their feelings.

“Debrief with people who you feel close to and supported by,” she says. “After a night of a lot of violence, as you’re seeing the uncomfortable feelings that you’re feeling being brought to the fore, as you think about police brutality, talk about it with people, share your thoughts. Don’t try to sweep those uncomfortable emotions away. Try to process them.”