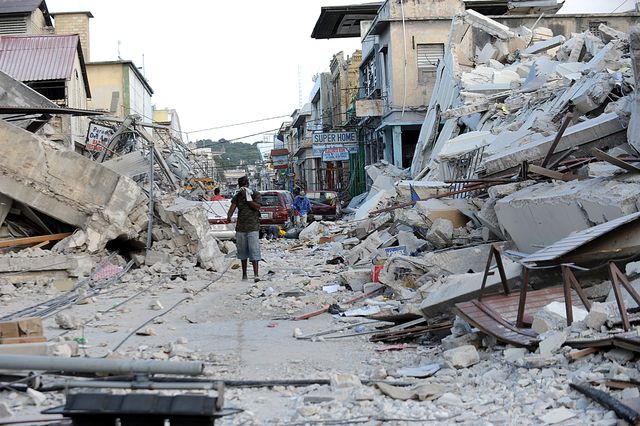 Haiti is in crisis. On Saturday, a 7.2-magnitude earthquake hit the Caribbean country, killing at least 1,297 people. Thousands of homes, as well as landmarks, churches, markets, and hospitals, have collapsed or been damaged, leaving people without supplies or shelter as a tropical storm rolls in early this week. Haitians are also still dealing with the global coronavirus pandemic and the current political instability caused by the recent assassination of President Jovenel Moïse. According to NPR, a rise in gang violence, as well as damaged roads and bridges, has made getting humanitarian aid to those who in need a “logistical challenge.” On top of everything, the nation hasn’t fully recovered from the destruction of an earthquake that hit in 2010, which killed more than 200,000 and displaced more than one million people, or from Hurricane Matthew in 2016.

Since Saturday, the New York Times reports several organizations have set out to offer aid in Haiti, including sending in a search-and-rescue team and distributing medical supplies. On Monday, the White House tweeted that the United States Agency for International Development deployed a Disaster Assistance Response Team to “lead the U.S. government’s response efforts in the aftermath of the earthquake.”

Find more about the current humanitarian efforts, and ways you can help, below.

CARE teams are working to distribute tents, water, and other “core relief items” to those displaced by the earthquake. According to the organization, CARE also has cyclone response supply kits ready to be sent to communities affected by the incoming storm.

🇭🇹 A team of experts from our office in Port au Prince has been deployed to evaluate damage and coordinate an appropriate health response following the 7.2 magnitude earthquake that shook #Haiti this morning.

The Times reports that the Pan American Health Organization has “sent experts to coordinate medical support” in Haiti, while PAHO’s website adds that the organization is preparing Emergency Medical Teams, medical supplies, and other strategic equipment to be deployed.

🇭🇹 @UNICEF is on the ground in Haiti, reaching the area most affected by the #EarthquakeHaiti.

Similarly, UNICEF is distributing medical supplies, per the Times, as well as assisting with water and sanitation. On Twitter, UNICEF shared that “@UNICEFHaiti is delivering emergency medical supplies and working to keep children and families safe in the difficult hours ahead.”

Our South Florida community is saddened by the news of the devastating 7.2 earthquake that struck Haiti. We’ve partnered with @MiamiHerald/@elnuevoherald to launch Haiti Relief Fund through Operations Helping Hands. To donate visit https://t.co/5L4D0RZmkc   #HaitiRelief #OHHMiami pic.twitter.com/K99PaB8SrC

#Haiti earthquake UPDATE: A photo from our team shows the extensive earthquake damage to many buildings in Port-à-Piment in the Sud region, where MSF runs a reproductive health project.

Doctors Without Borders (MSF) provided care for victims in the Sud province of Haiti within the first hours of the earthquake. The organization has continued to assist those who are injured and need follow-up care and launched a blood drive campaign in partnership with local authorities, per the MSF website.

In the wake of the 7.2 magnitude earthquake the struck #Haiti yesterday, Convoy of Hope is distributing meals, hygiene items, and sheltering supplies to those in need. Convoy will continue to stay committed to Haiti for the long term. pic.twitter.com/xIYHE9uBYD